Ms. Blake joins Central MP Paul Blomfield and Heeley MP Louise Haigh who both formally supported the UN Treaty on the Prohibition of Nuclear Weapons last year. All three will now work with Parliamentary colleagues to encourage the UK government to sign the agreement, which is likely to enter into international law later this year. The Treaty was agreed by 122 countries at the UN in July 2017, it seeks to bring nuclear weapons inline with other weapons of mass destruction such as chemical and biological weapons which are already illegal.

The MP for Sheffield Hallam stated “I’m delighted to have signed the pledge today in support of the ban treaty, it’s up to us as parliamentarians to lead the way to a world free from nuclear weapons. It’s time to do away with all weapons of mass destruction and I’ll continue to fight for that, working with colleagues in Parliament.” 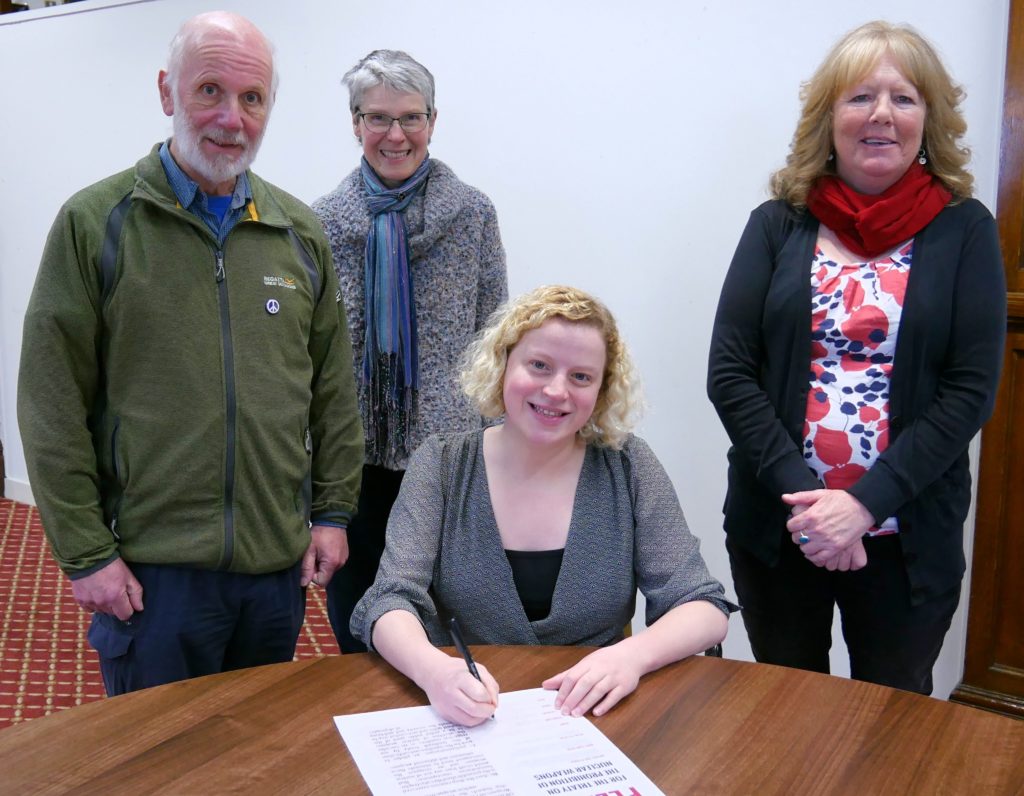 Cllr Murphy said: “We need to get rid of nuclear weapons, it’s as simple as that. I know that some people are concerned about that, in terms of our industries, but we need a plan to transition those jobs into the growing low carbon industries, so we aren’t threatening our future or our children’s future.”

Local campaigners from Sheffield Creative Action for Peace (ScrAP) and Yorkshire Campaign for Nuclear Disarmament (CND) are over the moon with the progress to date. Prof. Dave Webb, Chair of CND commented “This year marks 75 years since the atomic bombings of Hiroshima and Nagasaki and it would be timely if it also brought a ban on nuclear weapons to ensure such horrors never happen again. We are delighted to see Sheffield once again taking the lead.”

Group-Shot-Peace-Gardens (the above named, with members of Sheffield Creative Action for Peace)

https://en.wikipedia.org/wiki/Treaty_on_the_Prohibition_of_Nuclear_Weapons
Once 50 states ratify the Treaty on the Prohibition of Nuclear Weapons it will enter into force and become international law. To date 81 nation states have signed and 35 have ratified, meaning the Treaty is 70% of the way there and it is hoped it will come into force before the end of the year.

The Yorkshire Campaign for Nuclear Disarmament and Sheffield Creative Action for Peace are part of the International Campaign to Abolish Nuclear Weapons (ICAN) a global movement which won the Nobel Peace Prize in 2017 for it’s work.