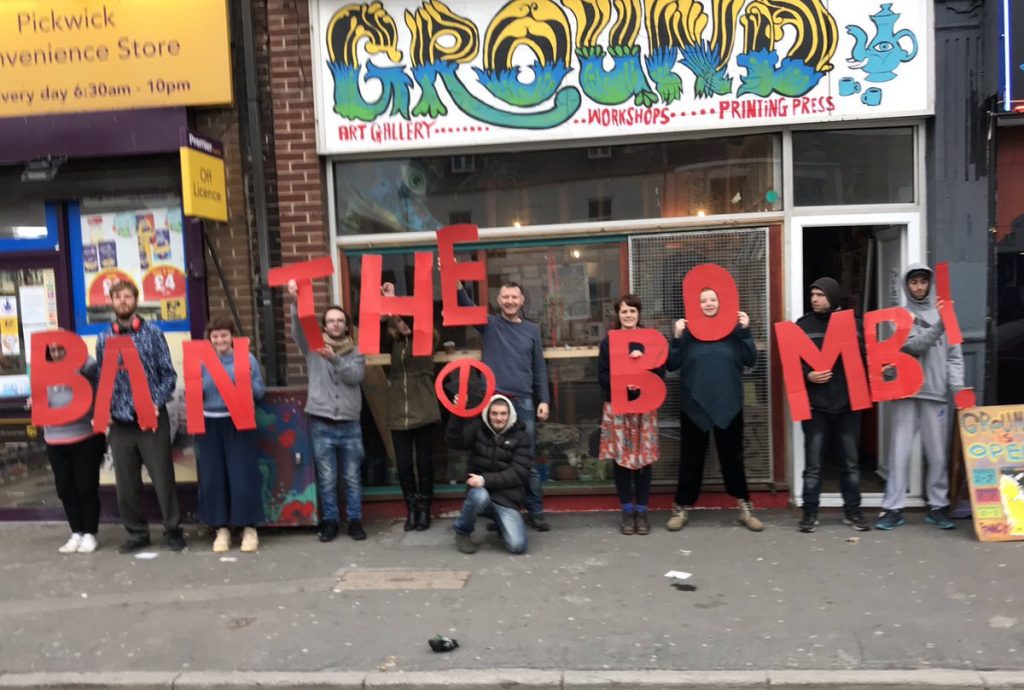 Campaigners in Hull outside a meeting about the TPNW

The United Nations adopted the historic international treaty banning nuclear weapons in July 2017, after years of negotiations which began with the ‘Humanitarian Impact’ meetings in Austria, Mexico and the Netherlands. 122 countries voted in favour of the treaty, representing almost two-thirds of UN member states. The new treaty will make it illegal under international law to develop, test, produce, manufacture, acquire, possess, stockpile, transfer, use or threaten to use nuclear weapons. It also makes it illegal to assist or encourage anyone to engage in these activities. The UK government refused to participate and even issued a statement attacking the treaty.

The Treaty on the Prohibition of Nuclear Weapons opened for signatures by national governments on the 20th of September 2017. Once 50 states  have ratified the treaty it begins the process to enter international law which should take 90 days. As of March 2019, 84 countries have signed the treaty, and 44 have ratified it.

Our members are building support for the Treaty across Yorkshire, lobbying MPs to sign the ICAN parliamentary pledge and encouraging City Councils to pass motions in support of the Treaty. So far, seven MPs have signed the pledge:

Getting a Treaty on the table is a huge credit to all those who’ve lobbied and campaigned for this over the years, but we can’t afford to rest on our laurels, the real campaigning starts now. A recent opinion poll showed that 75% of Britons surveyed think the UK should participate in UN multilateral disarmament negotiations but to date the UK Government have boycotted.

If you haven’t already, make sure you’ve written to your MP to ask them to support the Treaty, by signing the ICAN Parliamentary Pledge. Here are some tips:

Step one: Read our new guide How to: Lobby Your MP

Step two: Ask your MP to sign the Parliamentary Pledge – use the template email below and the Write to Them website to send them a message.

Step three: Go and meet your MP at their local surgery

Step four: Report back on their responses

Below is a template you can use to write to your MP via email or letter, asking them to support the Treaty for the Prohibition of Nuclear Weapons.

I’m writing to ask you to express support for the UN’s Treaty for the Prohibition of Nuclear Weapons. This treaty opened for signatories in July 2017, and prohibits nations from developing, testing, producing, manufacturing, transferring, possessing, stockpiling, using or threatening to use nuclear weapons, or allowing nuclear weapons to be stationed on their territory.

Over 80 nations have signed the treaty, and 44 nations have ratified it. It will come into force when 50 countries have ratified it, becoming the first legal ban on nuclear weapons. All of the countries with nuclear weapons boycotted the process, and refuse to engage with it. However, the International Campaign for Nuclear Weapons has launched a “pledge” that parliamentarians around the world have signed, to indicate their support for the treaty (including many in the UK). Is this something you would consider offering your support to? The full text of the pledge can be found here: http://www.icanw.org/projects/pledge/

I look forward to hearing from you regarding this matter,

Ask your MP to sign the Parliamentarian’s Pledge:
http://www.icanw.org/projects/pledge/

Read our new guide ‘How to: Lobby your MP‘.