“Here in the heart of Yorkshire, is Menwith Hill, one of the most secret bases on Earth, run by the NSA, the most powerful intelligence organisation in the world…” 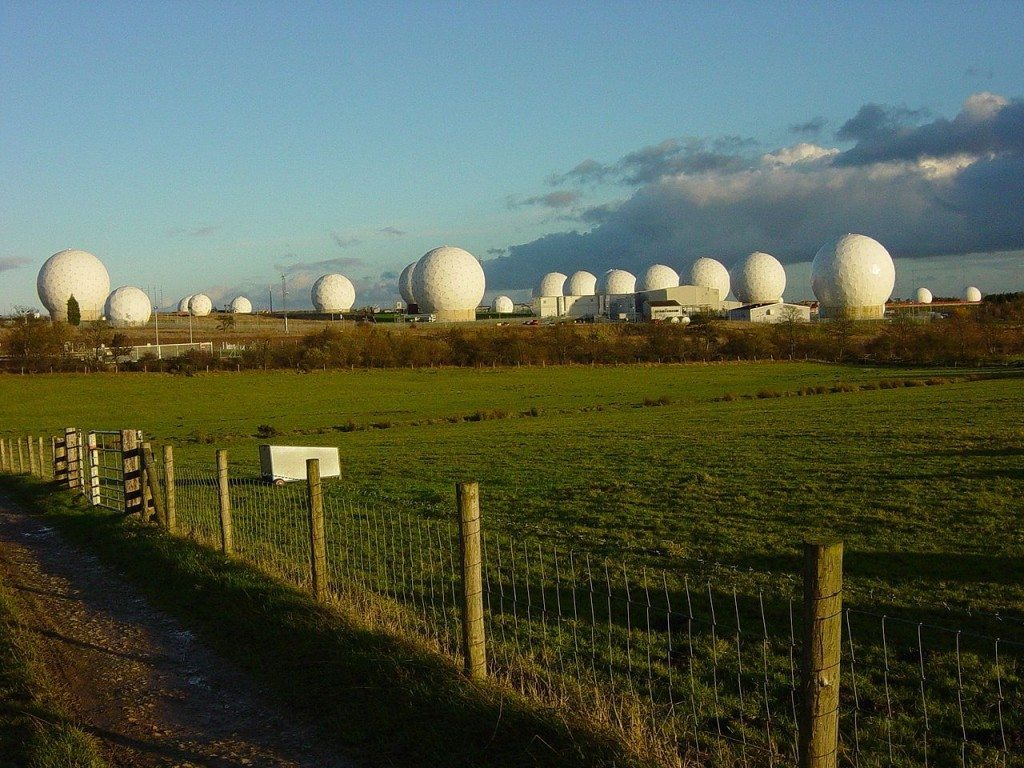 What is Menwith Hill?

Menwith Hill is one of the United States’ most important overseas bases, playing an integral role in the broader strategy of US global power projection. Nominally an RAF base, it is operated and controlled by the National Security Agency. Established in total secrecy by President Truman in 1952, the NSA is responsible for all US signals intelligence (SIGINT) activities, essentially the interception of electronic communications, both military and commercial. During the Cold War, the NSA rapidly expanded its operations and established a global interception network with intelligence analysis at its headquarters in Fort Meade near Washington.

The MoD purchased nearly a square mile of farmland and moorland near Harrogate in the 1950s, in preparation for a US SIGINT base. But it was only after the development of satellite technologies that Menwith Hill took on its (in)famous characteristics, with giant radome/golf ball structures. From a total of four in the early 1970s, there are now over thirty, reflecting the growth in satellite communications and the base’s interception capabilities. Personnel numbers have also expanded from 400 to over 2,000, mainly US military and civilian personnel and US contractors, supplemented by UK civilian workers and an unspecified number of GCHQ personnel. Essentially, Menwith Hill is run as an American enclave, with its own facilities and with the highest security clearance reserved for senior DoD personnel and US contractors.

Despite operating in total secrecy, the base attempts to project a positive relationship between itself and the local community, emphasising, in particular, its economic contribution. According to the American authorities, expenditure by base personnel, contractor work, etc, is worth over £100 million a year to the local economy. This is a highly dubious assertion but serves a useful public relations exercise in deflecting attention from its main roles in SIGINT, ballistic missile defence and new forms of intelligence-led covert warfare and special operations.

The fundamental issue is how the NSA has carried out a secret, multi-billion dollar investment programme at its regional centres to take advantage of advances in technology for integrated intelligence using electronic interceptions and satellite imagery. The NSA and other US intelligence agencies represented at Menwith Hill are now capable of overseeing ‘real-time’ military operations, identifying low-visibility targets and coordinating special operations forces and remote control technologies like drones. This is described by US strategists as ‘tightening the kill chain’.

What is nominally an RAF base is really an American ‘death star’, carrying out illegal forms of electronic spying and warfare over which there is no democratic accountability and very little debate. The only solution is to challenge the legitimacy of a foreign power occupying a large area of Yorkshire countryside.

Inside Menwith Hill –The NSA’s British Base at the Heart of U.S. Targeted Killing

For more information and detail on the role of Menwith Hill, and how the ‘golf balls’ work, this report by Ryan Gallagher published in 2016 in The Intercept, is a good summary.


Duncan Campbell, the investigative journalist who in 1988 revealed the existence of the ECHELON surveillance programme of which Menwith Hill was a key part, also has a great deal of information on his website 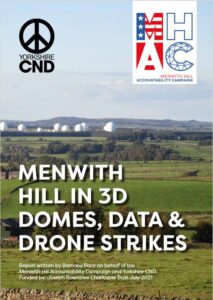 Our latest report, jointly produced with the 2Menwith Hill Accountability Campaign” was launched during “Keep Space for Peace Week”  in 2021. It was written by journalist and campaigner Barnaby Pace and is an incisive intervention into both the current state of knowledge regarding Menwith Hill, as well as the political, legal and moral issues which present a challenge to the activities which occur as a result of its presence in our region.

The main objectives of the report were:

And, as the report says in the conclusion:

“Legal challenges against the UK’s surveillance apparatus and its involvement in drone strikes have shown that the UK’s security services were acting unlawfully for years, though many crucial cases are still being fought in the courts”

“While the US and UK forces operating at Menwith Hill continue to operate beyond public scrutiny and accountability, theOrwellian surveillance systems and extrajudicial executions exposed in recent years will likely continue.”

Lifting the Lid on Menwith Hill

Our previous research report on the strategic role of Menwith Hill (including surveillance, intelligence led warfare and missile defence) was launched in April 2012 . “Lifting the Lid on Menwith Hill”, pieces together over 30 years of research into the subversive activities of the US spy base, spanning military documents, whistleblower evidence, European Parliamentary evidence and investigations by journalists and peace activists.

Altenatively a paper copy can be mailed out to you by contacting the office on 01274 730 795 or info@yorkshirecnd.org.uk. 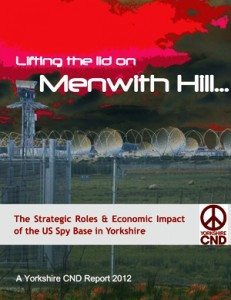 ” A must read report. His findings are a challenge to officialdom but they are presented with the calm authority of the academic”
NATO watch

Every Tuesday evening (6-8 pm) – outside the main entrance to the base. Please note that occasionally the day changes, it is advisable to ring ahead and doublecheck – 07902 173148

In October each year – during Keep Space for Peace Week, an international week of protest called by the Global Network Against Weapons and Power in Space to focus on the connection with the US Missile Defense (Star Wars) system and as the US concept of “Full Spectrum Dominance”.

Each year on 4 July – ‘Independence FROM America Day” – check the MHAC website for details.

Join a Quaker Meeting for Worship