Yorkshire CND is opposed to the possession of nuclear weapons by any state.

In addition, the judgment stated that because of the

“unique characteristics of nuclear weapons … the use of such weapons in fact seems scarcely reconcilable with respect for [the principles and rules of law applicable in armed conflict].” (Opinion, para 95).

The UK government’s proposed upgrade of the Trident nuclear weapons system is seen by many to be illegal under the Nuclear Non-Proliferation Treaty (link to NPT section) which commits signatories to disarmament. In June 2009 a report by the Foreign Affairs Committee entitled Global Security: Non-Proliferation stated that “the decision to renew the UK’s Trident system is perceived by some foreign states and some among the British public as appearing to contradict the Government’s declared commitment to strengthening the international nuclear non-proliferation regime.”

The threatened or actual use of nuclear weapons challenges all ethical and moral beliefs. They kill and injure people and destroy buildings indiscriminately. When nuclear weapons were used in Japan they killed 140,000 in Hiroshima and 80,000 in Nagasaki. They affected future generations who were yet to be born at the time of the bombings. Judge Ranjeva of The International Court of Justice stated that

“Human society has ethical and moral norms based on wisdom, conscience and practicality. Many norms are universal and have withstood the test of human experience over long periods of time. One such principle is that of reciprocity. It is often called the Golden Rule: ‘Treat others as you wish to be treated.’ It is an ethical and moral foundation for all the world’s major religions.”

Some nuclear weapons states believe that this principle can be abrogated and that they can achieve security through the threat of weapons of mass destruction. The Report of the Canberra Commission on the Elimination of Nuclear Weapons (1996) highlighted the impracticality of this by stating:

“Nuclear weapons are held by a handful of states which insist that these weapons provide unique security benefits, and yet reserve uniquely to themselves the right to own them. This situation is highly discriminatory and thus unstable; it cannot be sustained. The possession of nuclear weapons by any state is a constant stimulus to other states to acquire them.”

“States should treat others as they wish to be treated in return.”

Nuclear states suggest that they need nuclear weapons as a deterrent – to use in retaliation if threatened by others. However, the possession of nuclear weapons creates an imbalanced and insecure world and does not create true human security. It is entirely hypocritical for states who own nuclear weapons to tell others that they should not have them – particularly if the nuclear states are suggesting that they only need them for their own protection. If that is the case why shouldn’t others also possess them for that purpose? During the cold war nuclear weapons led to the arms race. By 1986, it is estimated that throughout the world there were 40,000 nuclear warheads – the equivalent of one million Hiroshima bombs. Many of these warheads remain and missiles are standing by on ‘hair trigger alert’ status, ready to be launched at a moments notice. Not a secure situation at all.

The possible possession or development of Weapons of Mass Destruction also continues to be the cause of conflict. The invasion of Iraq in 2003 was supposedly due to its programme to develop weapons of mass destruction – although no trace of this programme was ever found. The tense international situations concerning Iran and North Korea are also due mainly to the possibility of their developing nuclear weapons.

In actual fact Trident was designed and developed not as a deterrent but as a first strike system. The Trident missiles can be targeted very accurately – to within a few meters. This is something that is not required if the targets are cities and the purpose is deterrence. However, it is an essential capability for a first strike at missile silos and/or other specific military installations.

The UK’s nuclear weapons system is carried in 4 submarines. One of them is on duty 24/7, ready to fire.

Replacement of Trident and associated costs will equate to atleast £205 billion. Instead of spending that vast sum of money on a defence system which cannot be legally used, that amount could be used for one of the following; 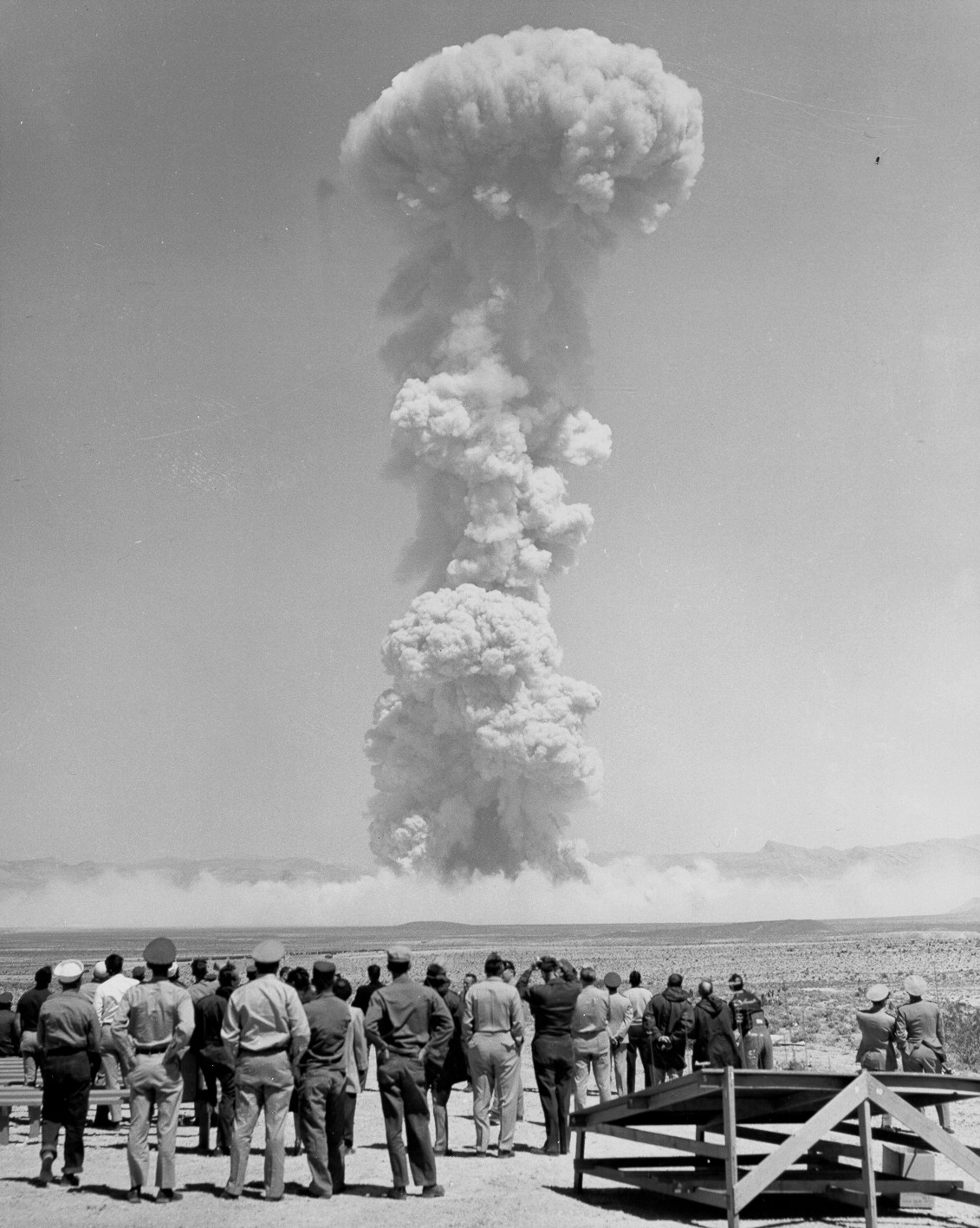 Between 1952 and 1967 the UK carried out a series of atmospheric nuclear tests, some of which were much more powerful than the bombs used on Hiroshima and Nagasaki. The tests were performed in the Pacific Ocean and near Australia and involved 20,000 service people. A survey of 2,500 of them was conducted in 1999 and it found that 30% of those involved had died, the majority in their 50s. Their grandchildren had spina bifida rates five times higher than the national average. (http://www.bntva.com – the Charity for Atomic Veterans)

The Comprehensive Nuclear Test Ban Treaty was adopted by the United Nations in 1996. It bans all nuclear explosions in all environments for military or civilian purposes but is not yet in force. The US has signed but not ratified the treaty which has delayed it coming into force. President Obama is seeking ratification of the treaty from the Senate (http://www.nytimes.com/2010/02/19/us/politics/19nuke.html). (www.ctbto.org – Comprehensive Nuclear Test Ban Treaty Organisation)

We are currently bound into a nuclear framework with the US by a unique bilateral agreement, the 1958 Mutual Defence Agreement (MDA)*. Under this agreement collaboration covers all aspects of nuclear weapons design, development and maintenance. All features of the UK system — the platform, delivery system and warheads of Trident depend on US support. The Trident II D5 missiles are leased from a US missile pool and are manufactured, tested and serviced in the US; Trident warheads are based on a US design and several of their crucial components — without which they would not work — are manufactured in the US and purchased off-the-shelf by the UK. Our system is also reliant on US software and hardware for all aspects of targeting.

Nuclear weapons will not help stop climate change which is the real threat facing humanity. In fact climate modeling shows that the smoke and dust created in a full scale global nuclear war would most likely block out the Sun’s rays, preventing them from reaching the ground – resulting in the so-called “nuclear winter”. Recent calculations have indicated that even the use of nuclear weapons on a small scale (perhaps as small as the number of warheads carried by one Trident submarine) could affect the climate catastrophically.

They are also of no use against the other recognized security threat – international terrorists – in fact the regular transport of nuclear materials up and down the country makes us more of a target for terrorists wishing to obtain nuclear materials.

Abolition 2000 is an international global network working for a treaty to eliminate nuclear weapons within a time-bound framework. It is open to all organizations endorsing the Abolition 2000 Statement. The Network aims at providing groups concerned with nuclear issues a forum for the exchange of information and the development of joint initiatives. The Abolition 2000 Network meets once a year and communicates on an ongoing basis via a number of list serves and through conferences, teleconferencing, and periodic mailings.

A model Nuclear Weapons Convention, drafted by a consortium of lawyers, scientists, physicians, former-diplomats and disarmament specialists and activists, was launched in 1997. Its purpose was to demonstrate the feasibility of a framework approach to the elimination of nuclear weapons, and to encourage governments to enter into nuclear disarmament negotiations. In addition, it can also be used to educate and engage the public in the progress towards nuclear disarmament.In 2007, the same groups updated the model convention and released it at the NPT PrepCom in New York as a book entitled Securing Our Survival and Costa Rica submitted this as a Conference Document.

The International Campaign to Abolish Nuclear Weapons (ICAN) is an international campaign to promote the Nuclear Weapons Convention. Initiated by the International Physicians for the Prevention of Nuclear War (IPPNW), ICAN was launched at the 2007 NPT Preparatory Committee meeting in Vienna.CND has joined with Medact – the British section of IPPNW – and other organisations to launch the campaign in the UK. Many other groups all over the world are launching the campaign in their own countries, with particular support from Mayors for Peace.

The Mayors for Peace is composed of cities around the world that have formally expressed support for the program Mayor Araki announced in 1982. As of November 1, 2014, membership stood at 6,374 cities in 160 countries and regions. We were registered as a NGO in Special Consultative Status with the United Nations Economic and Social Council in May 1991. A number of cities in Yorkshire have Mayors for Peace – including Bradford, Hebden Royd, Keighley, Kingston upon Hull, Kirklees, Leeds, Otley, Rotherham and Sheffield. It is administered in the UK from the office of the Nuclear Free Local Authorities in Manchester.The Acronym Institute conducts research, participates in meetings, analyses developments, and disseminates ideas and information on peace, disarmament and human security in all their aspects. Our primary purpose is to facilitate the fuller and better-informed participation of civil society and nations in developing and implementing effective measures to demilitarize relations between states and peoples, promote human security and protect the environment.