Yorkshire protests in solidarity with Ukraine and against Russia’s war

Yorkshire protests in solidarity with Ukraine and against Russia’s war
Posted by Jonas on 7th March 2022 in news, Uncategorised

Across the region, CND and peace groups joined the global Ukraine In Peace call out to oppose Russia’s war. Peace activists have been organising and involving themselves in coalitions committed to stopping Russia’s invasion of Ukraine, de-escalating the situation away from the possibility of nuclear war, and demanding this government welcomes Ukrainian refugees fleeing war.

In Leeds, CND and the Feminist Anti-War Resisters were joined by Unite Community, the National Education Union, Stand Up For Racism, Extinction Rebellion and Leeds For Europe, for a march from Briggate to Leeds Town Hall. According to the Yorkshire Evening Post, around 500 people were in attendance. As well as the YEP, the protest was also covered by ITV News. 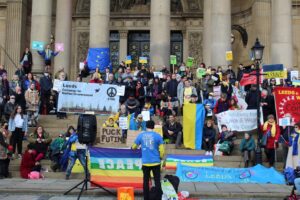 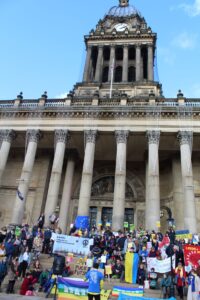 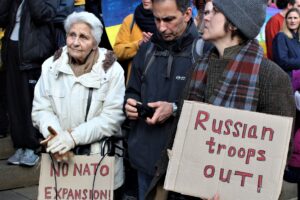 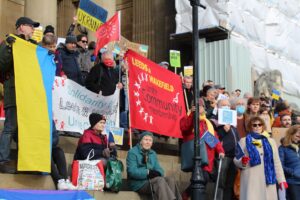 In Bradford, the second ‘Hands Off Ukraine’ protest was organised, this time predominantly by Yorkshire’s Ukrainian community. The first took place on the previous Wednesday, organised by Momentum, CND and others. 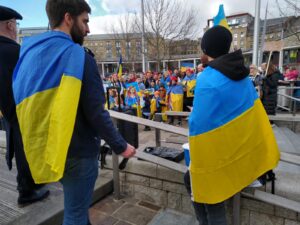 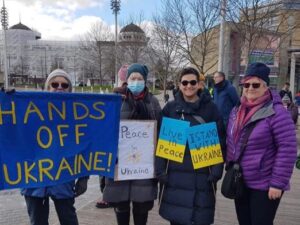 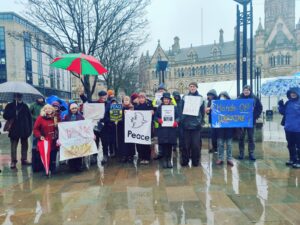 In Calder Valley a protest was also organised with peace campaigners uniting with local Ukrainians to oppose the war. 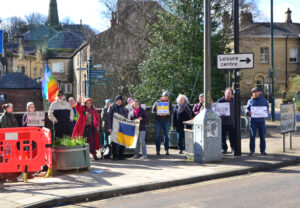 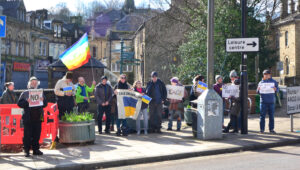 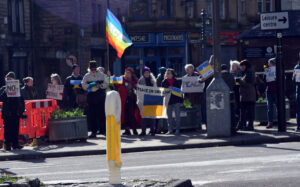 If you organised an action in your area please send photos and videos to info@yorkshirecnd.org.uk, and we will share on social media and our website. As long as the war continues, there will be more and more actions.