Yesterday the board of EDF (the French State owned nuclear company) agreed by a narrow margin to go ahead with the controversial Hinkley Point C nuclear power plant, only hours later the UK energy secretary stood them up at the contract signing ceremony. So what’s going on and why is Hinkley such a bad idea?

Even proponents of nuclear power as a necessary evil to combat climate change, such as George Monbiot and Mark Lynas have come out against Hinkley Point C. The problem is that the ‘EPR-style’ reactors are far larger and more complex than anything built before, likened to ‘building a cathedral within a cathedral’ by the head of nuclear engineering at Cambridge University.
There are already two sites in Europe being built to the same design Olkiluoto in Finland and Flamanville in Normandy, both of which have been beset by building safety issues, massive delays and spiralling budgets. Flamanville is currently running 5 years behind schedule and at over three times the original budget. Both plants are aiming to be producing energy by the end of 2018 but further substantial delays are to be expected. In short, EPR is not only is an unproven technology in terms of energy production or long term stability, it is one that has proven itself costly and difficult to implement even within the peculiar world of the nuclear industry.

Therefore, it’s important to take the proposed building completion date of 2027 with a pinch of salt.

We need low carbon solutions now, we can’t wait a decade or more

So if the plant may well not start producing until the late 2020s or mid-2030s what do we do in the meantime? The German ‘Energiewende’ model has proved that renewable energy can be rolled out far more rapidly, with far fewer delays and much lower costs. Backing a (still unproven) nuclear option to come online in a decade or more, means that in the meantime we continue to burn dangerously polluting coal. As any climate scientist will tell you, what matters is accumulated carbon in the atmosphere – targets of reducing emissions by 80% by 2050 are all very well, but they are political rather than science-based, what matters from the point of view of climate change is the emissions we are making right now and how quickly we can reduce these. 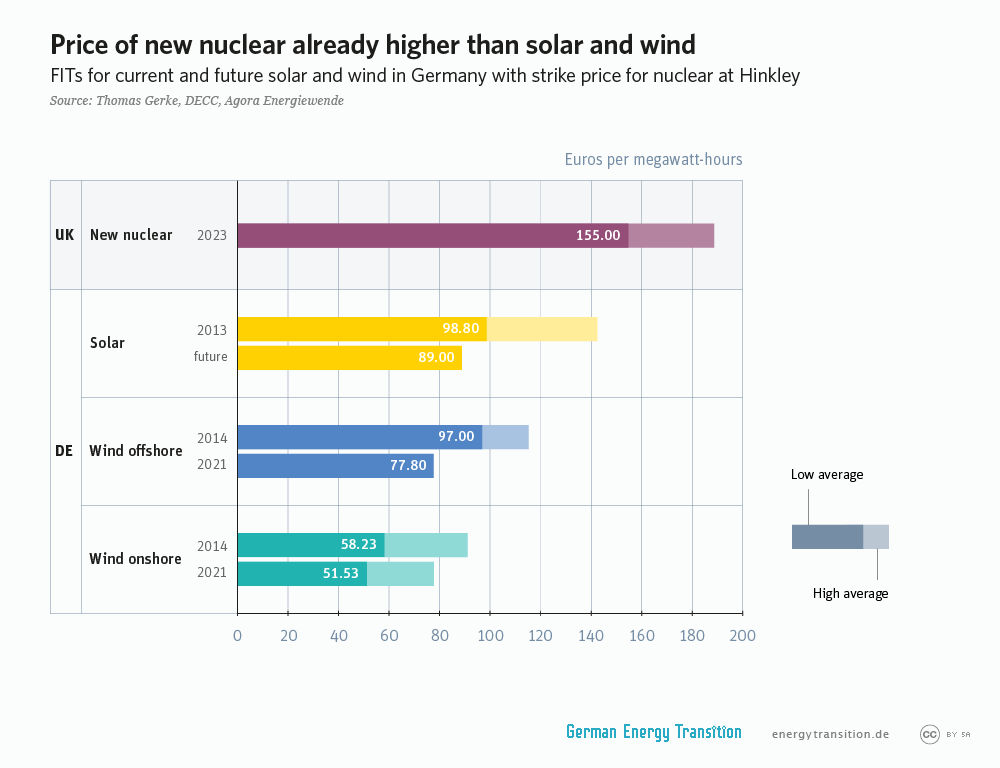 It is now widely accepted within UK energy policy that the future of our energy system lies with renewable sources such as wind and solar. The problem with these technologies is that their production is highly ‘stochastic’ (full of ups and downs), because they rely on the British weather – there are times when there is plenty of both sun and wind and we will produce too much energy, but equally times when there is neither. What we therefore need is investment in flexible sources of power that can be used to plug these gaps, technologies that are already in place like ‘pump storage’ that pump water up the hill in times of excess energy, to produce energy by releasing it later. Sadly, these technologies can only produce a small amount of our energy need and while we wait for battery storage technology to mature we’ll need to invest in gas turbines (running on conventional gas at present and bio-gas in the longer term). Such a strategy has been laid out in the excellent ‘Zero Carbon Britain‘ report, produced by the Centre for Alternative Technology, which like all sensible strategies focuses on energy efficiency improvements as the first port of call.
In a similar way to an instant hot water system in the home, gas turbines can be fired up quickly and are relatively efficient even for short usage cycles. Once a Nuclear power plant is in operation, it has very limited options for increasing and reducing it’s power output to match the needs of the grid.

It has been suggested that Hinkley Point C will be the single most expensive object on the face of the earth. This massive initial outlay will be met by the French state power company Électricité de France (EDF) and the Chinese Government. EDF already has net debts of over £31 billion and there was therefore much resistance to the Hinkley deal, both from Trade Unions and members of the EDF board. It is interesting to note that China, while being viewed as a threat requiring us to keep our Trident nuclear weapons system, are also seen as a trusted partner when it comes to civil nuclear infrastructure. In committing to £6bn of the build costs at Hinkley, the Chinese gain a foothold in Western Europe as the deal also involves a stake in a new project at Sizewell and the possibility of building their own reactors at Bradwell in Essex.
In order to ensure a 10% return on this investment, the UK government made a controversial promise to buy all the energy produced by the power station over 35 years at a cost per megawatt double the current UK energy cost. This is based on the assumption that in the future energy will become more expensive. Again, what we have seen from the German model is that as more renewable energy has come online the megawatt market cost of power has gone down. It has been suggested by DECC that the overall public subsidy of Hinkley will be £30 billion, which will ultimatley be met by tax payer or bill payer. That does not include the controvertial costs for decommissioning and waste disposal. Oh yeah, which brings us on to…

Still no solution on Waste

There is still no long term sustainable solution to what to do with nuclear waste and the UK govt has refused a number of Freedom of Information requests as to what plans exist for the waste at Hinkley, so there is currently no public or parliamentary scrutiny of plans.

So what can we do about it?

At the moment the project is ‘in review’ and therefore vulnerable to public pressure, so now is the time to act.
Don’t just sign the Greenpeace petition, get your friends and family to sign it too, share it on social media, print out a copy and take it on your street stall.
Talk to your MP or get in contact with the Stop Hinkley Campaign.