Trident and Its Replacement 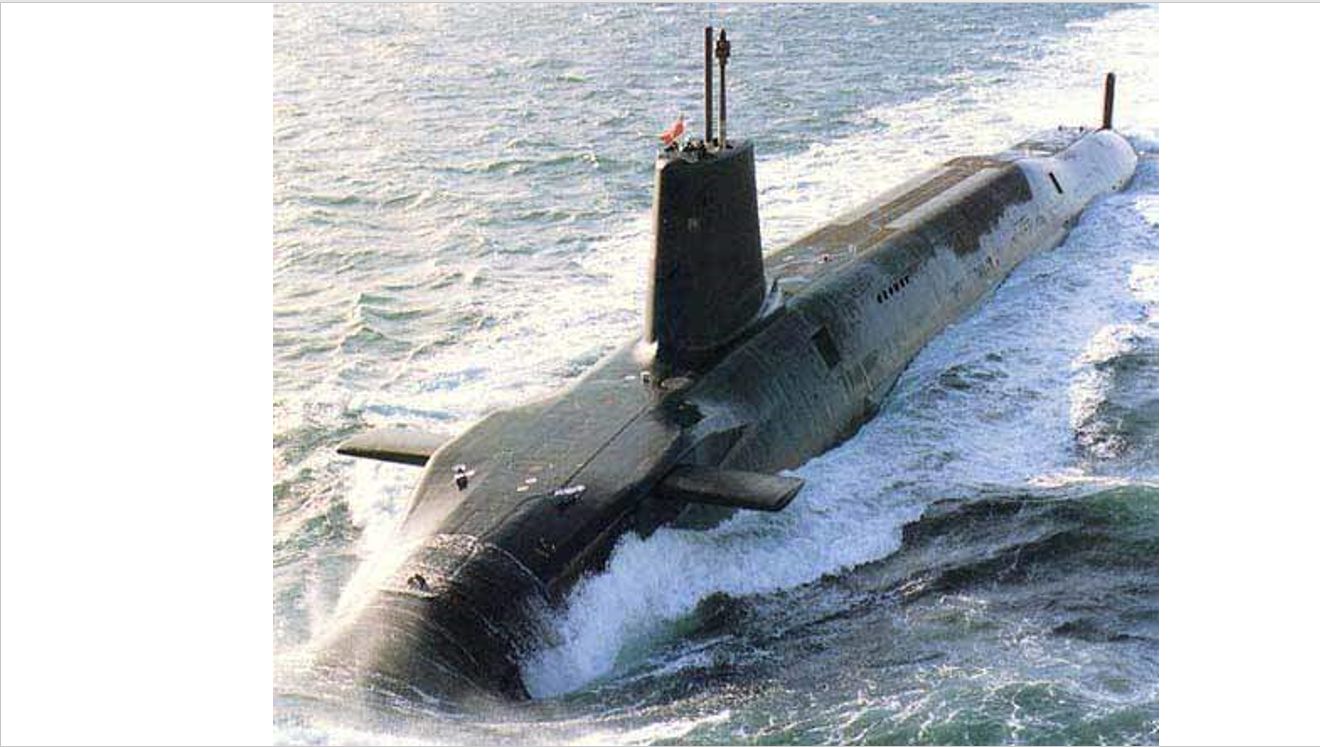 Just to recap –  Trident is the UKs only nuclear weapons delivery system. It consists of four Vanguard class nuclear submarines based at Faslane in Scotland. Each submarine is armed with up to 8 US Trident D5 missiles with a total of 40 warheads distributed among them. Each of those warheads can be independently targeted and each one is around 8 times as destructive as the bomb that flattened Hiroshima in 1945. 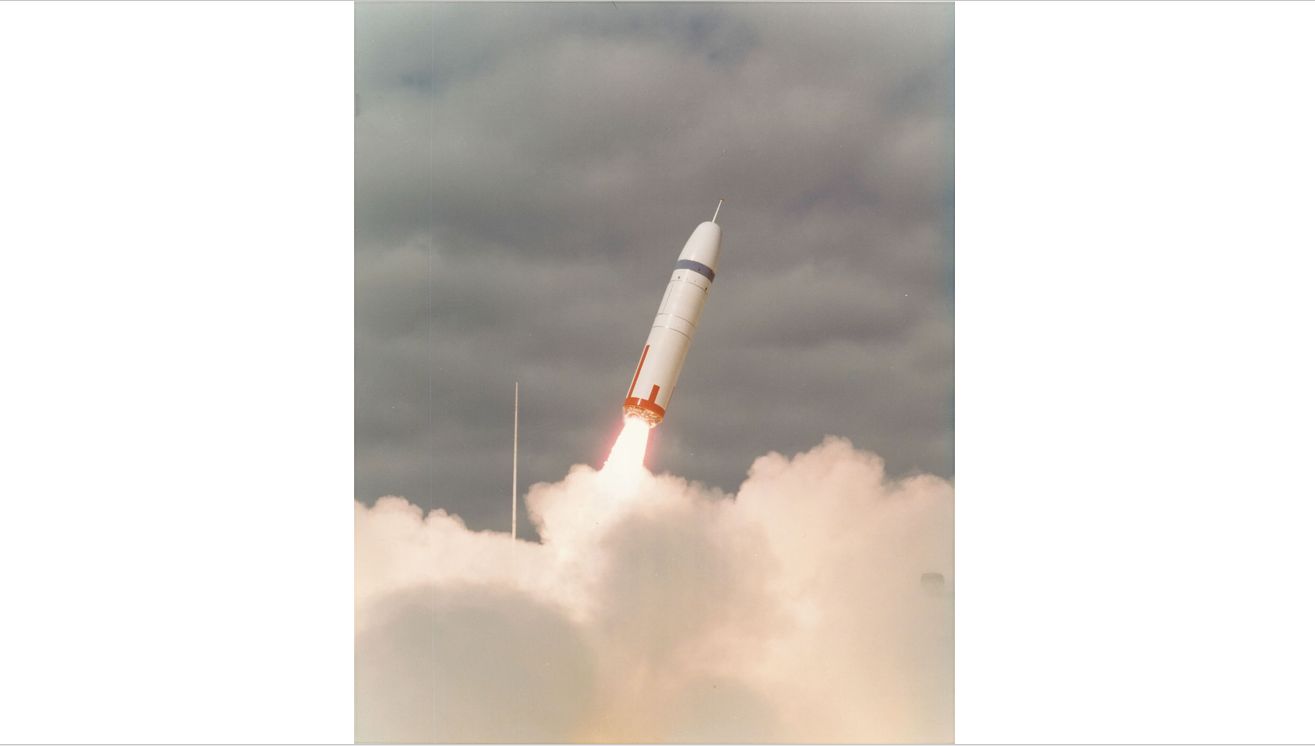 The government claims that one submarine is continuously on patrol every hour of every day. However, it was recently revealed that two Trident submarines have spent a year undergoing repairs, so it is not clear how ‘continuous’ the patrols are. 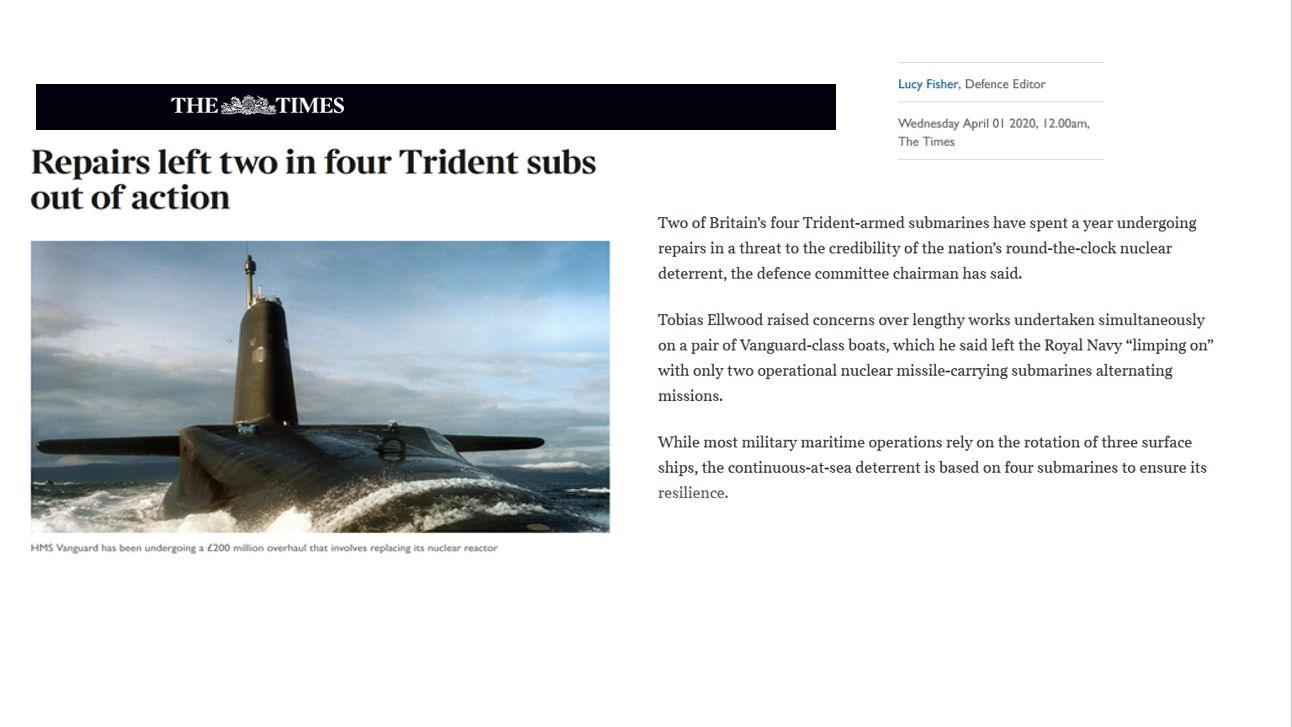 The government also often refers to Trident as an independent nuclear weapons system, but it’s almost totally dependent on the United States. For example, Britain doesn’t own the missiles, they are leased from the United States and taken from a pool of missiles maintained in the US at Kings Bay, Georgia – also the UK Trident warheads are produced jointly at Sandia National Laboratories in the US and at AWRE Aldermaston.

Let’s go through what’s new with each of those components – the submarines, the missiles and the warheads.

The UK parliament eventually agreed to replace the Trident Vanguard fleet in 2016 with 4 submarines in a new ‘Dreadnought’ class. Around the same time the US decided to replace their Ohio class of Trident bearing submarines with a new ‘Columbia’ class. 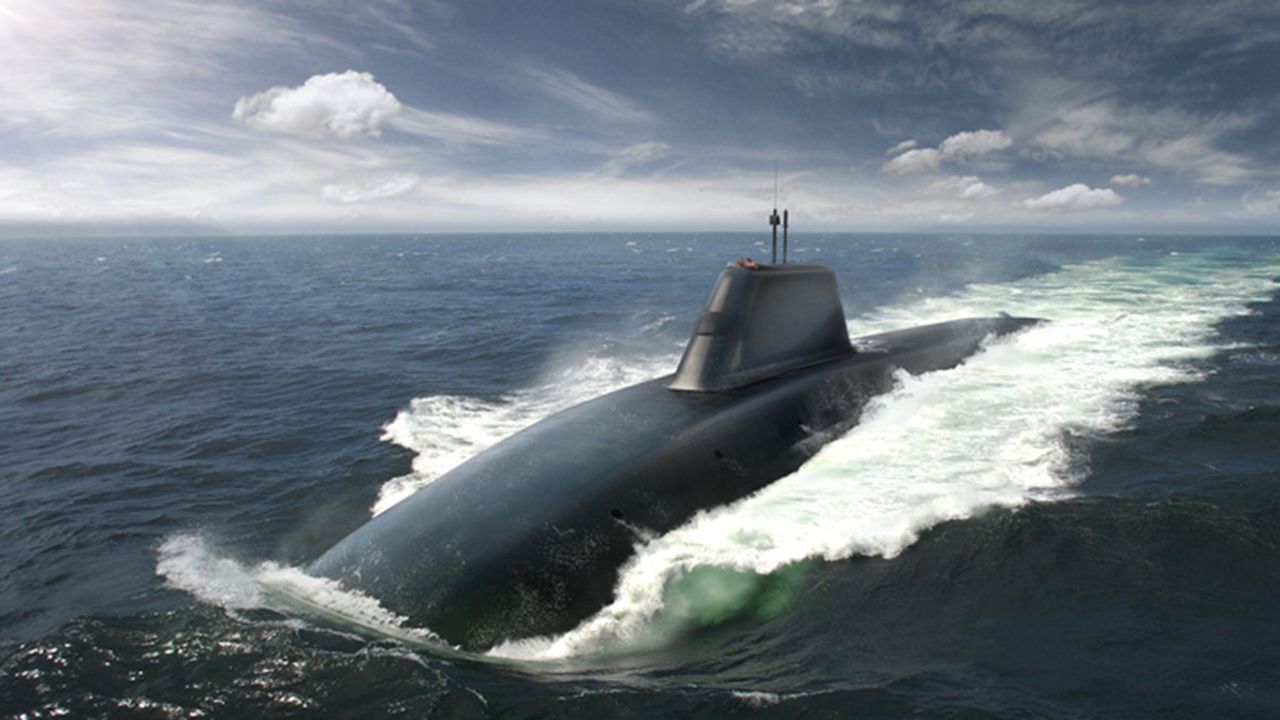 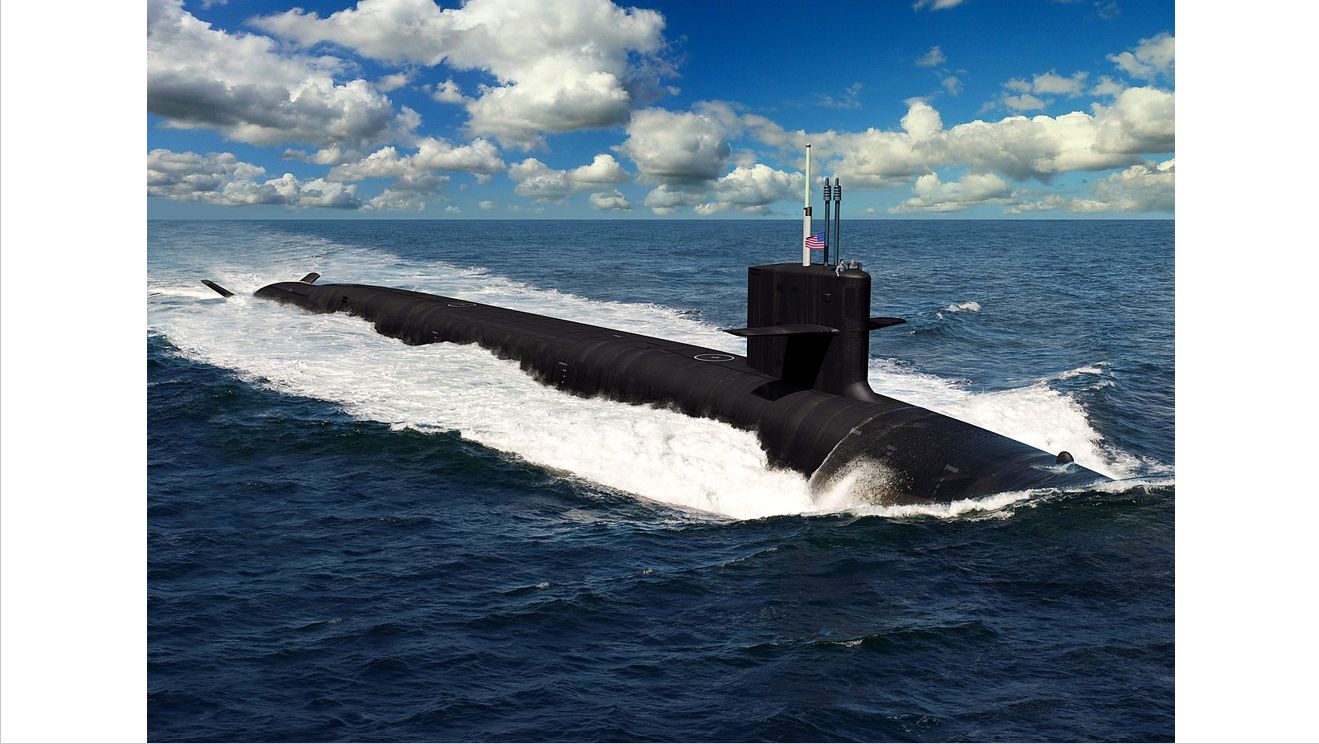 Dreadnought is being built at Barrow-in-Furness by BAE Systems and they will be maintained at the Devonport Royal Dockyard in Plymouth by Babcock Marine Systems. They are to be propelled by a new design of nuclear reactor, the PWR3, which is based on a US design and these will be manufactured in Derby by Rolls Royce.

In January a National Audit Office report revealed a problem with this. Because the upgrade to Trident depends on three monopolistic suppliers – AWRE, Rolls Royce and BAE Systems – contracts cannot easily be terminated even if poor performance is identified. This results in billions of pounds of cost overruns and the programme running years behind schedule. 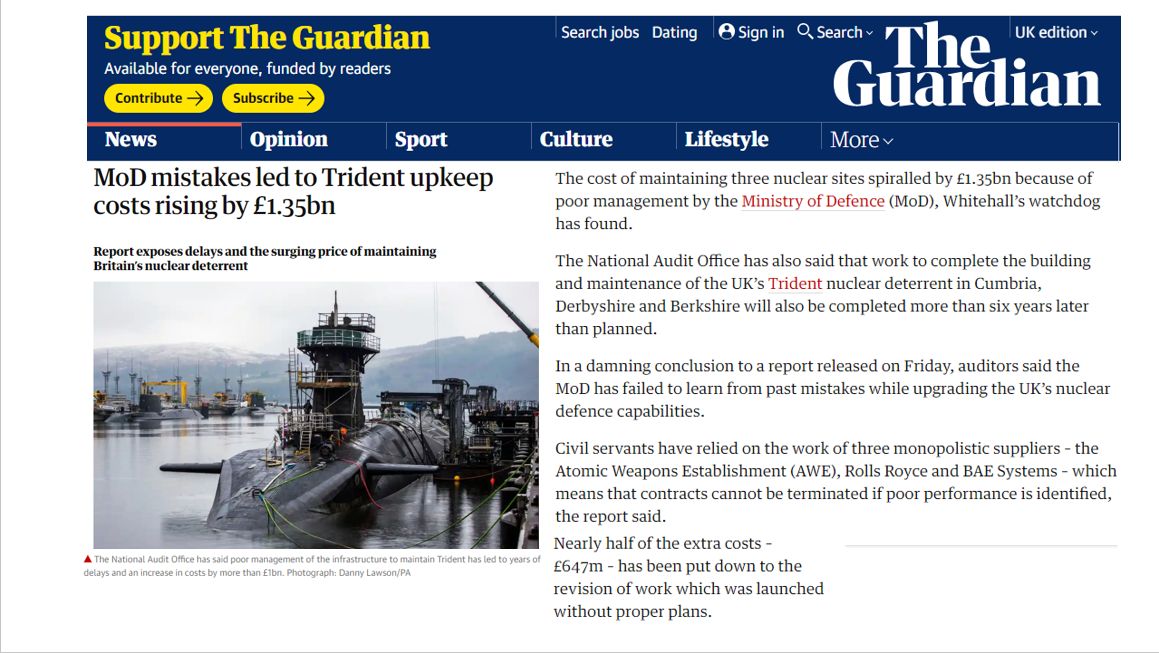 In 2015 the amount to be spent on the new submarines had already been increased from £25 billion to £31 billion and an extra £10 billion contingency fund was established for when the project goes over-budget, which it surely will. The costs are increasing all the time, for example, it was recently revealed that spending at AWE Aldermaston had doubled from a budgeted £2 billion to almost £4 billion in one year.

Taxpayers are also paying £30million a year to store 20 nuclear submarines waiting to be dismantled at the Devonport dockyard. One of these submarines is actually the first British nuclear submarine which was decommissioned as long ago as 1980. Costs for the programme have soared, and the whole dismantling project is £800million over budget and 15 years late. 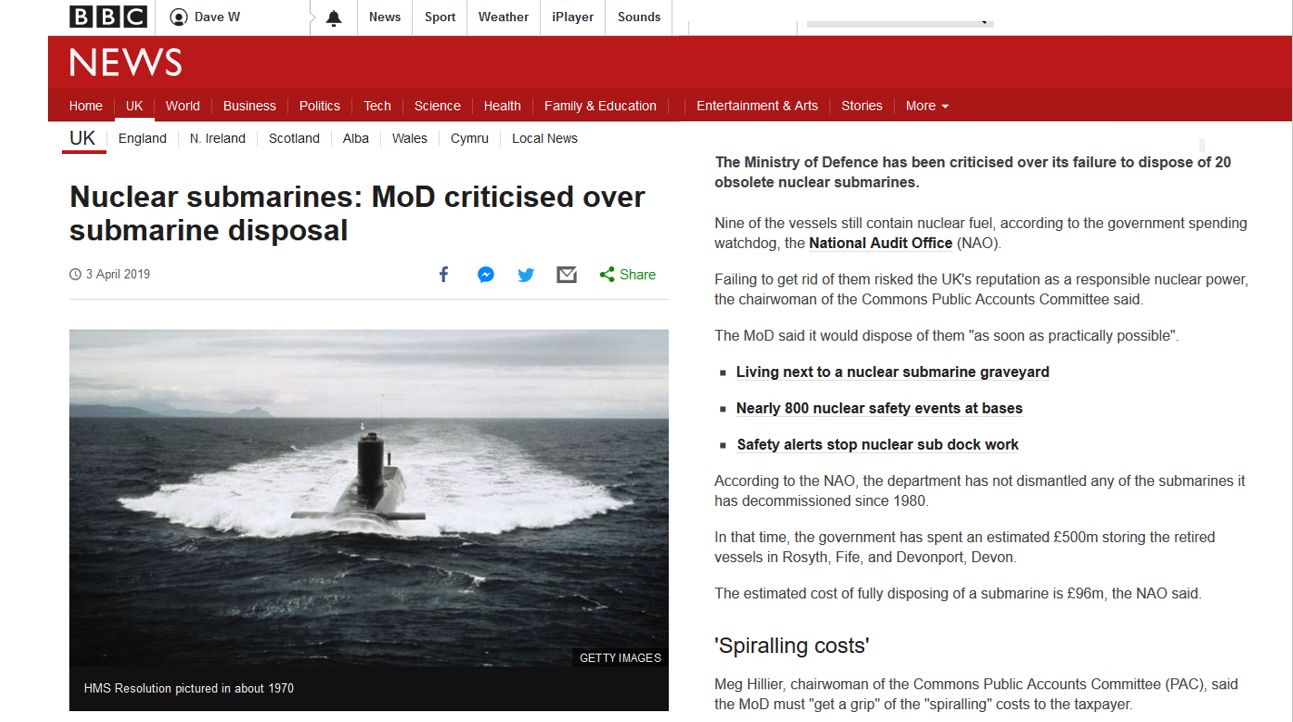 It was also originally thought that Dreadnought would enter into service in the 2030s but it is likely to be much later than this now. When it does appear, the annual running costs were set to be around £2.4 billion or 6% of the defence budget – who knows what they will actually be.

The Trident D5 missiles were first deployed in 1990 and were originally planned to be in service for 30 years – until 2020 – and so Britain is paying £350 million to opt-in to the US plans to extend the life of the Trident system to the year 2040. The result is that a life extended version of the D5 missile – the D5LE, is now being deployed until the US has a new generation replacement ready. The D5LE has an improved navigation and fusing system which makes them much more accurate, more deadly. 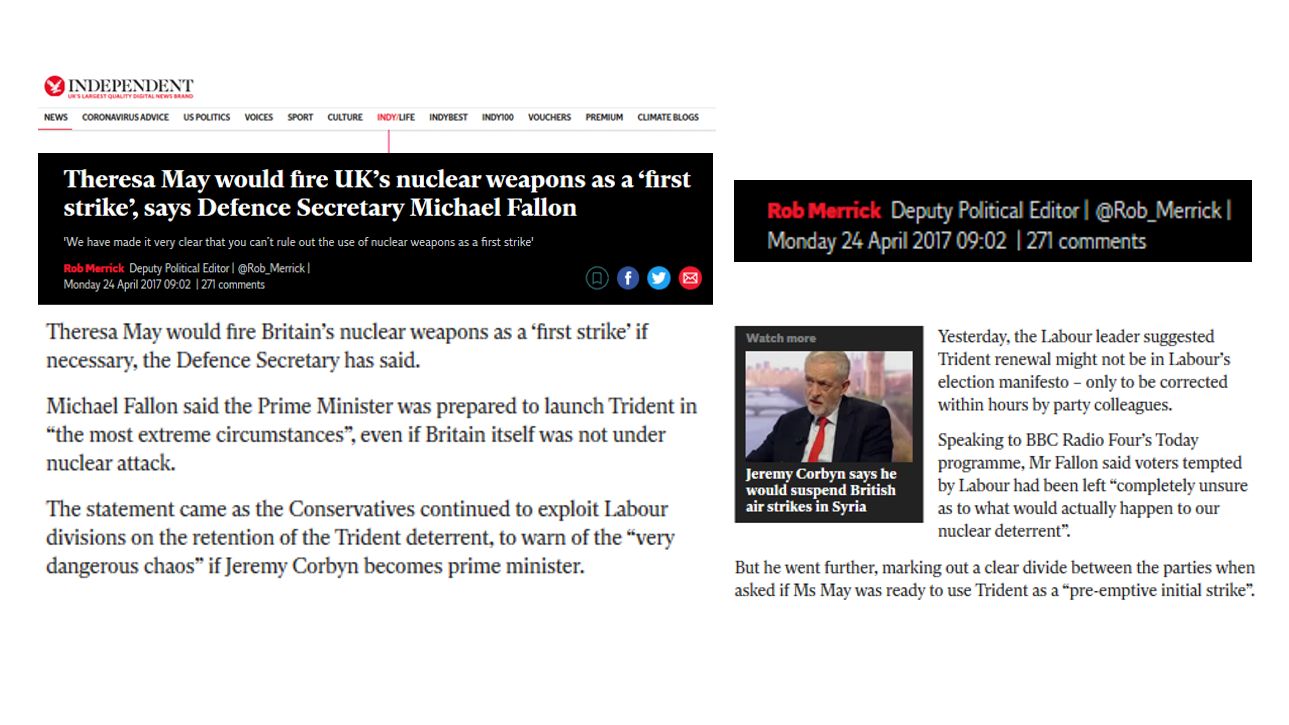 This kind of accuracy would not be needed for ‘deterrence’ and emphasises that Trident is developed as a first strike weapon. This is a point picked up on by Rob Forsyth – previously an executive officer on a Polaris submarine during the Cold War – he has been pointing out the differences between then and now and questioning the current possible ‘first use’ policy which is also a strategy of NATO of course, to which Trident is assigned. Just a few days ago Forsyth and 2 other ex-naval commanders have written:

“it is completely unacceptable … to spend billions of pounds on deploying and modernising the Trident Nuclear Weapon System when faced with the threats to health, climate change and world economies that Coronavirus poses.” 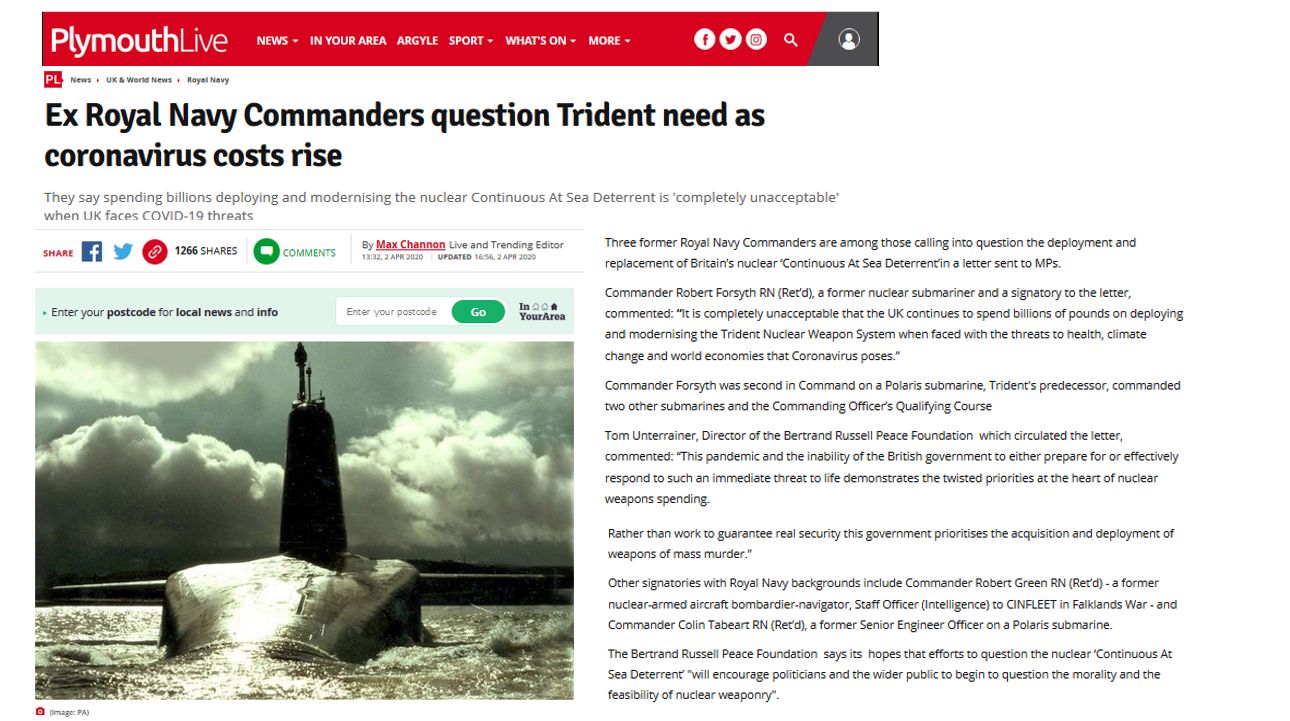 Additionally, the replacement for the D5LE is not due until the 2040s but Dreadnought was originally due to come into service before that, so it is being designed to carry the current missiles and then the new US replacement ones when they come along. The UK has already paid for a significant proportion of the development costs for a Common Missile Compartment (CMC) for the Dreadnought and Columbia submarines to enable this switch over to take place when the time comes. 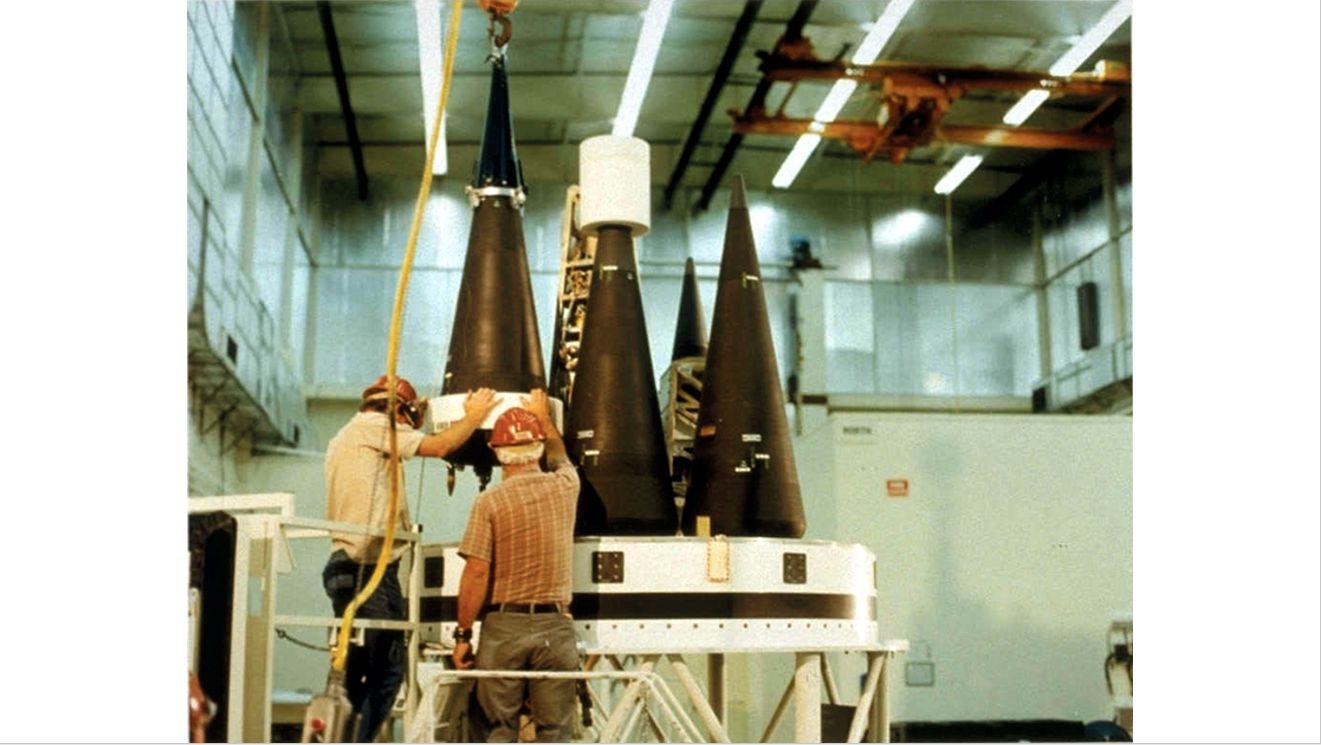 The warheads on the UK’s Trident are based on the US W76 Trident warhead, with several of the UK warhead’s key components being bought ‘off-the-shelf’ from the US.

Just a few weeks ago it was also revealed by Pentagon officials that the government will be developing a new generation of warheads for Dreadnought which will be based on a new US W93 warhead being designed for their new Columbia submarines. This was revealed before any discussion in Parliament or any announcements by the UK government. 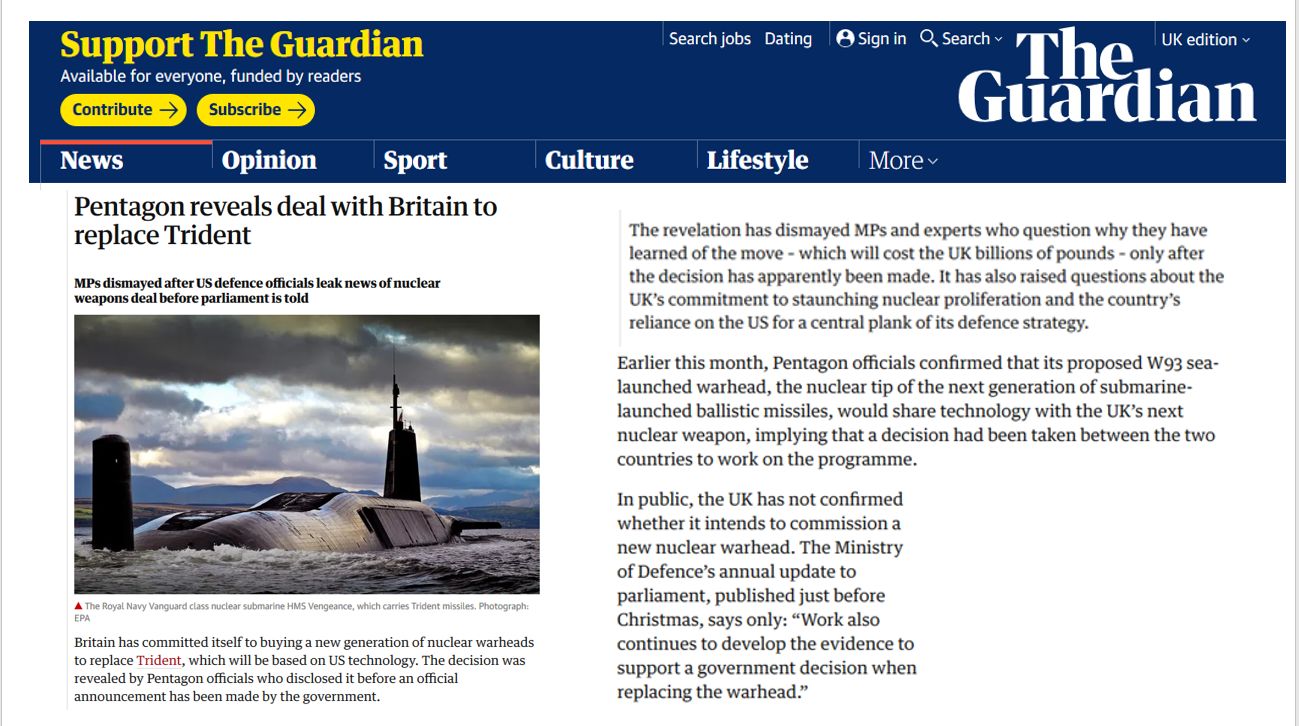 The cost – when the government talks about the cost of replacing Trident it only quotes the cost of replacing the submarines (about £30-40 billion). If the total cost of everything that is required to build, service and maintain the replacement for Trident is taken into account, then CND has estimated the cost to be £205 billion over its life-time.

There are many reasons to question the replacement of the Trident system – not just the cost. A major reason why submarines were retained as the British nuclear arsenal was that they can remain hidden and undetectable under the sea. However, rapid technological progress in underwater drone technology and space-based sensors is making it possible to detect their presence even when submerged. There are also serious concerns and doubts surrounding that the vulnerability of the Trident system to cyber-attacks – despite vague reassurances from the government. 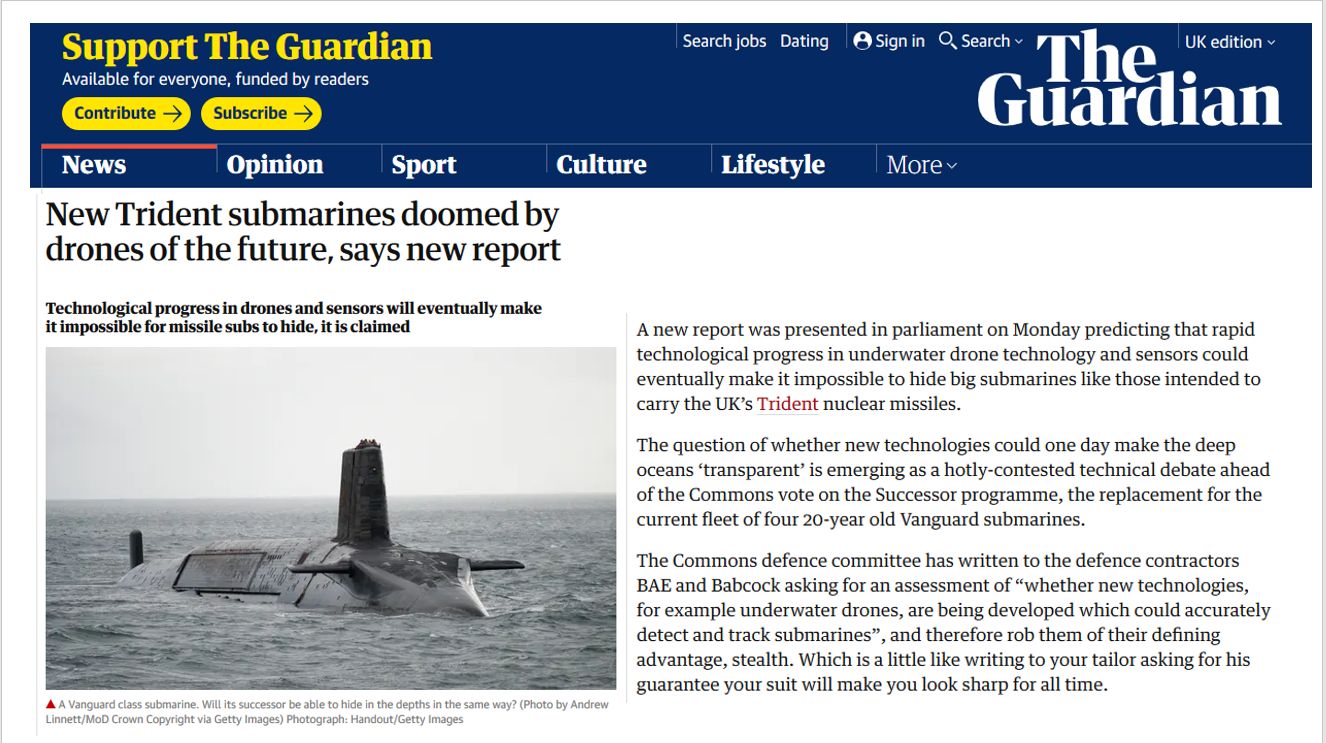 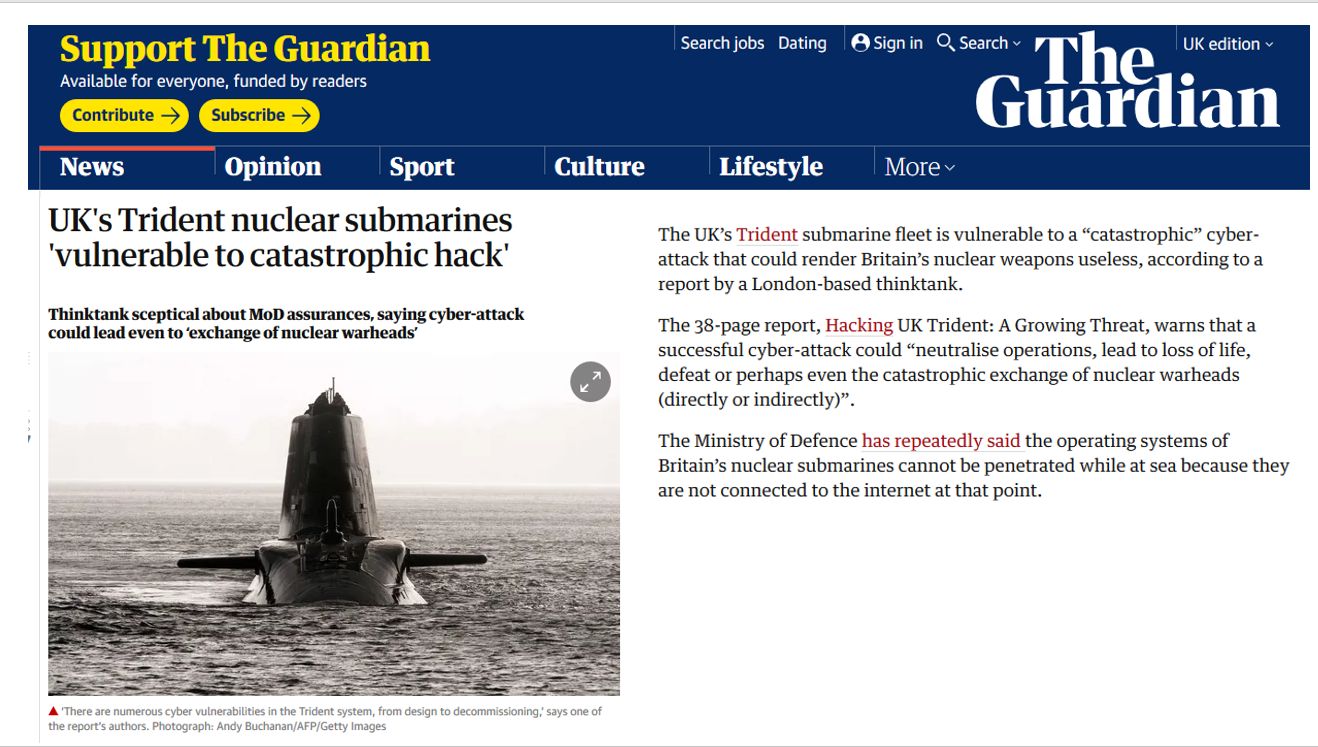 The 2015 National Security Strategy has identified the security threats the UK currently faces. Among the Tier one threats listed are terrorism, cyber-attacks and a health crisis due to pandemics.

Nuclear weapons cannot help with any of these.

As we are experiencing now, this analysis has not been reflected in the government’s actions. We were not prepared at all for the covid-19 virus, while the government continues to claim that having a nuclear weapon is vital for our security.

Nuclear weapons are actually worse than useless – they are diverting money and effort away from addressing the real threats. The sooner the government comes to its senses and scraps Trident and its replacement the better.

Thanks for doing what you can – good luck and stay well!