What I did on my holidays

What I did on my holidays
Posted by Dave Webb on 10th August 2016 in Analysis, Demonstration, news

I thought that a couple of weeks in sunny Sardinia would enable me to briefly forget about the criminal parliamentary decision to renew Trident and, basically, the militarisation of everything.  Of course not! The military, industrial, media complex reaches out everywhere. 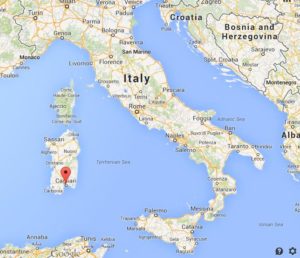 While in Cagliari (the major town of Sardinia) I contacted Massimo who our friend Vincenzo from the No MUOS campaign in Sicily put me in touch with. He told me that there would be a demonstration at a large bomb factory in the nearby town of Domusnovas later that week. Photographic evidence of unexploded bombs used by the Saudi-led coalition against a Houthi rebel stronghold in northern Yemen has shown them to originate from this factory. The attacks against Houthi rebels in Yemen are backed by the US, UK, Turkey and Pakistan but condemned by Russia and Iran and have undoubtedly lead to many unlawful civilian deaths (see the 2015 report https://reported.ly/2015/06/24/blood-money-italy-bomb-yemen/).

In June 2015 activists and journalists from Reported.ly traced the shipping of bomb components from the Italian port of Genoa to Jeddah, Saudi Arabia, then to Dubai and from there overland to a bomb assembly plant in Abu Dhab. Later, in October, a cargo of bombs aboard a Boeing 747 was tracked from the civilian airport in Cagliari directly to a military base in Saudi Arabia. 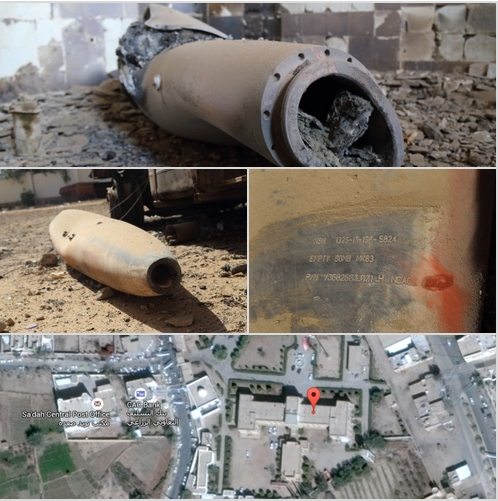 According to Human Rights Watch the 1,000-lb MK83 bombs made in Sardinia are “designed to inflict damage, death and injury through blast and fragmentation effect” and they have also documented the illegal and fatal use of banned cluster munitions in Yemen. The investigative news group Reported.ly reports that Italian export licences for over €100 million have been granted since 2012 for these bombs and other munitions and argue that some of these shipments could contravene the Arms Trade Treaty and the EU Common Position on arms export control, under which:

“Italy must undertake a rigorous case-by-case risk assessment of each proposed arms transfer to determine if there is a substantial risk that the arms are likely to be used by the intended recipient to commit or facilitate serious violations of international human rights and humanitarian law. If there is a substantial risk, Italy must deny the export license.” [Emphasis by Reported.ly]

Domusnovas is some 40km north west of Cagliari and was at one time used to manufacture dynamite for the mining industry. As the mining industry declined the local government spent a lot of money converting the factory to arms manufacture and it was bought up by the Germany-based arms manufacturer Rheinmetall AG. Local protestors argue that if the government is able to spend money on conversion from civil to military production – it should also be able to do the opposite, especially when civilians are being killed as a consequence. 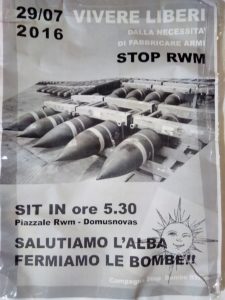 The demonstration was aimed at the early morning shift at the factory starting at around 6am. So the protest was called for 5.30am outside the factory gates. The meant leaving Cagliari around 4am and after a 30 minute walk through the quiet town I got to the rendezvous point for my lift. There were four of us in this car and we eventually joined 20 or so other cars that had come from various directions to meet at a cross roads a little way from the factory gate. Everyone was surprised by the lack of police presence to greet us. It soon became clear that the factory had cancelled the first shift because of the planned demonstration. We walked the short distance from the crossroads to the factory gate and it was there that the police had gathered. Lots of them! There were perhaps a hundred of us but many more of them, some in riot gear. It was pointed out to me that this was not because they expected any problems from the protest but because of the number of bombs and explosives stored in the grounds of the factory. 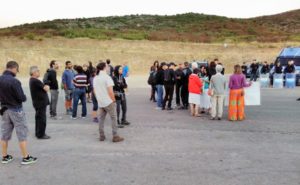 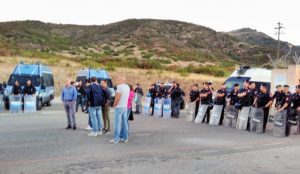 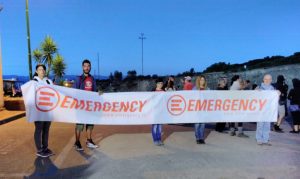 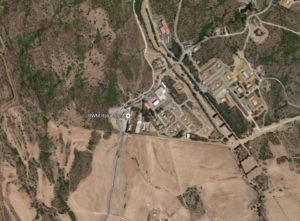 
We stayed outside the gates until the sun rose and the morning started to heat up. The temperatures reached in the morning are too high to stand in for any length of time so we left soon after that. Many went home while others met up again in a nearby café to talk about further possible actions. Massimo told me that there are many military exercises in the north of the island, some of which appeared to have left traces of depleted uranium. He also showed me documents that indicate that a space tracking and surveillance facility is planned. We need to keep in touch, sharing information and highlighting any new developments.

What is happening in Sardinia is just one example of how bombs and bomb components are manufactured in Europe and shipped to conflict areas. As Reported.ly says:

“After thousands of civilian deaths, millions displaced and half the population facing food shortages, Yemeni society has all but collapsed. Egregious human rights abuses by both the Saudi-led coalition and Houthi militias fighting to retain control have been documented, including the recent bombing of an MSF hospital in the northern city of Saada.

The EU would do well to examine the legality of these shipments and sanction Italy if they prove illegal.”