To Lakenheath & Beyond
Posted by Samuel Legg on 11th June 2022 in Demonstration, news, nuclear weapons

Following reports that the US Department of Defense has added the UK to a list of NATO nuclear weapons storage locations in Europe being upgraded under a multi-million dollar infrastructure programme, it is believed that US nuclear weapons will be coming to RAF Lakenheath, a base in the UK that is run by the Americans.

110 nuclear bombs were stored at the airbase until they were removed in 2008 following persistent popular protest, and they must not be allowed back.

From across the country and beyond, CND and peace groups recently gathered to protest the possible return of US nukes to RAF Lakenheath. With a showing of over 300 supporters, it was clear that the voice for peace remains strong. We wanted the government and wider public to be aware of the risk of these weapons returning, and provide the government with our message that these weapons are not welcome back in Britain. Whilst we may have gained some media coverage from several news outlets including BBC News, the Morning Star, Cambridgeshire Live, Suffolk Live, Suffolk News, we hope this to be only the beginning of mass mobilisation with CND against the rising risk of nuclear war, in the wake of tensions in Ukraine.

As CND General Secretary Kate Hudson noted at the demo, “News that US nuclear weapons may already be back in Britain, at RAF/USAF Lakenheath, makes the UK once again a forward nuclear base for the US in Europe”. Her statement that the UK is in the process of once again becoming a leading nuclear base for the US, proves the urgency of need for a mass action to take a stance against this status before it is too late. In the coming months, we hope to build relations with other movements and raise awareness that the issue of nuclear weapons effects all of us. Whether that’s from an economic perspective, in that the money funding them could be going to support those in need and our public services, or simply the fact that when a nuclear weapon strikes it causes unimaginably harm to everyone no matter their societal status. By meeting with activists to discuss intersectionality between movements, we know than we can do stronger campaigns as a collective and raise attention to the anti-racist, climate activist and feminist case for nuclear disarmament (to name just a few).

“We can work together to create a safe, just, and sustainable world. It is possible and we must do it.” – Dave Webb at Lakenheath. 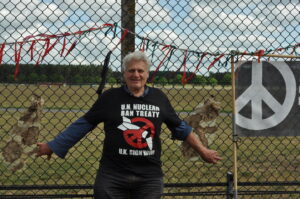 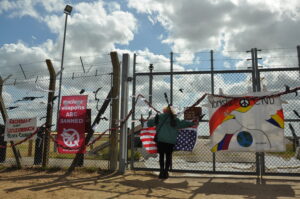 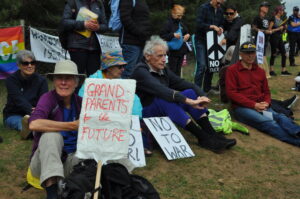 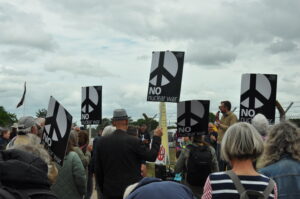