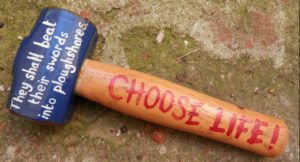 ——————————————————————————————————
Advance warning that membership subs fall due soon; this will help pay for the rise in the cost of our monthly hire of a room (recently increased) and other expenses which are currently threatening our existence as a group. The month since our last mail out has seen Sheffield CND in action both at the UK’s drone control base at Waddington and at Fylingdales (see reports below) though in small numbers. For members who are also members of the Labour Party and under the impression that Party policy includes unilateral disarmament it should be pointed out that this is no longer the case.

Report Back
Waddington Drone Control base
A small turnout with no main speaker, the central theme was ‘we’re watching you’ emphasized by oversize specs and binoculars/field glasses. The Sheffield SCRAP banner was on display at the main gate, though the action here failed to disrupt normal activity which had clearly been switched to another gate (though a small band of activists was there to make the point). The morality of drone warfare continues to attract interest at a parliamentary level and a useful update of the argument and governmental evasions appeared in the Independent recently (see attachment).

Fylingdales Early Warning Station, N. Yorkshire moors.
Roughly 35 CND supporters, mainly from Yorkshire took part in the annual march with banners along the busy – and it has to be said, dangerous – A169 to hear speeches and deliver a message to the Site Commander at the main gate. On return to the gazebo a mile down the road there were more speeches from Kate Hudson and others (including ‘Konni’ , a visiting peace activist from the Ramstein base in Germany) who gave a chilling reminder of the significance of an ‘early warning’ system as a vital secondary phase following a ‘first strike’ by the West. Live music from several members from York and Leeds who braved the challenging conditions and delivered memorable contributions together with hot drinks and food helped raise the tone. This, along with many banners and placards (see pics) helped make this a colourful and noisy event – well worth the effort!

The Hammer Blow’
Organised by SCRAP this moving event at the QMH the day before our meeting on the 19th attracted a good sized crowd estimated at around 60 and the stack of books on the subject disappeared with speed.

CND Conference, Manchester Mechanic’s Centre
The Open Meeting which followed the AGM looked at challenges and opportunities. The question of how to get through to unresponsive MPs was one that surfaced on several occasions. The response from MP Rebecca
Long-Bailey was thorough and convincing (see attachment). Sean Morris spoke on the ‘Mayors for Peace’ which is growing internationally and is closely allied with ‘Nuclear Free Local Authorities’.

Follow up from September meeting:
CAAT affiliation is proceeding and we are inviting a local ex-arms industry employee to offer some insights at our AGM in January (when annual subs become payable!). Sheffield makes a significant if well-hidden contribution to this unpleasant side to the UK economy which included the recent supply from the UK of over £3bn in arms to the Saudis (probably used in the bombing of hospitals and schools in the Yemen). In the same context we also plan to establish contact with the Sheffield Yemeni community in Sheffield.

Correspondence;
Attached is a flyer for the film ‘Shadow World’ on the arms trade showing soon at the Showroom soon plus bulletins from The Drones Network and National and Yorkshire CND. Notable in the CND bulletins are

A call from Kate Hudson for e mails to Boris Johnson urging that the Government sends delegates to the next Disarmament Conference set up under the Non-Proliferation Treaty and to be held in Austria (in place of the current disgraceful policy of ignoring this obligation under the NPT).

a call for a lobby on Nov ember 25th/26th of MPs on the dangers of nuclear convoys (this can be done at home in Sheffield).

A briefing on the case brought by Marshall Islanders against the UK at the ICJ (which was thrown out by the court).

Dates for your Diary: