——————————————————————————————————
As well as continuing concern regarding the nuclear ‘First strike’ policy endorsed by the UK and US events linked to nuclear weapons since the last report include the Trident replacement debate in the House of Commons, ongoing attempts by members of the ‘Military Families against the War’ to bring Blair to court over the invasion of Iraq. Locally, Yorkshire CND reports new moves by the group Nukewatch in the Wetherby region, as well as plans for demonstrations to coincide with ‘Keep Space for Peace’ week at 12.30pm on October 5th at RAF Fylingdales, N Yorkshire.

Report Back
Lobby of Sheffield MP’s re Trident: Earlier this month Felicity led a CND deputation to meet her MP Nick Clegg, who appeared to be more open-minded on the question of Trident than last time with the interview being filmed by channel 5 to be screened in October ! No other attempts to contact Sheffield MPs recorded (with predictable results on how they voted).

MPs debate on Trident renewal in the House of Commons July 18th
Louise Hague, MP for Heeley spoke well in the debate in the House of Commons though she continues to say she is unable to pass comment on the issue of nuclear weapons until the Labour Party has a clear policy.
The voting record for Sheffield MPs was:
Betts, C Sheffield SE For
Blomfield, P Sheffield Central Against
Clegg, N Sheffield Hallam Against
Furniss, G Brightside & Hillsborough For
Hague, L Heeley Against
Smith, A Penistone & Stocksbridge For

(For = in support of Trident replacement) – Some surprises here and room for discussion!

Heeley Festival June 18th:
Sheffield CND present and visible here! This annual event was once again a pleasure to attend with the gazebo and pasting table augmented with leaflets, books and badges plus an anti-Trident petition (signed by 80 members of the public) and messages plus individual discussions on various topics connected with Trident. Some questioned the suitability of the pitch we had been allotted which was on a steeply sloping bank.

Menwith Hill, July 2nd
Lacking a key speaker made the event a bit quieter this year though that was partly compensated for by choirs and contributions from (armed forces) veterans for peace.

Nationwide Protest July 18th
Timed to coincide with the debate amongst MPs inside the House, events were held up and down the country. Outside our Town Hall there was a good collection of around 25, including equal numbers of SCRAP/CND and Green Party members with 3 banners and many placards to remind the public of what was happening in their name. Hilary was interviewed by a Radio Hallam reporter and Jon had issued a press statement in advance.

Upcoming Events
Peace Picnic, Meersbrook Park Aug 7th. We now have confirmation that Louise Hague will be in attendance; Lord Mayor invited and accepted an invitation. CAAT has also been invited as has the Green Party and WILF. Matt will be coming to represent Yorkshire CND plus the YCND stall and ‘People’s Choice’ attraction. Offers of volunteer help for setting up welcome, also any press contacts and/or photographers!

Next SCRAP meeting is August 4th , in the café attached to The Art House,
8 Backfields (off Division St), Sheffield centre.

RAF Waddington/Drones action
There will be action outside the Drone centre including kite flying during a week of action on Drones, October 1st-8th. This will also happen in the ’Keep Space for Peace’ week (October 4th-11th), an International CND event.

‘The Hammer Blow’ : Part of ‘Off the Shelf’ festival, October 18th (organized by SCRAP).

CND AGM October 22nd/23rd
We are entitled to 2 delegates (actually me plus one more) for anyone interested; please let me know if you would like to take part.

Other
There are still problems with contacting around 20 members on the Sheffield CND list; the e mails simply bounce back so if you know anyone who is puzzled by lack of contact from Sheffield CND please ask them to contact me!
Finance: funds stand at £140; the ‘change of signatures‘ as required by the Coop bank was minuted (from last month).
CAAT affiliation: A member has written suggesting we affiliate to CAAT; although there is currently no Sheffield group we think this makes sense but would like a broader response before going ahead. Please let me know your views on this.

Dates for your Diary NO MEETING IN AUGUST!!! 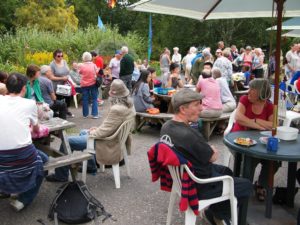