Kath will be standing down as Secretary, and the role will be shared by Jon Wallis and John Baker. Roles to be shared after discussing with Kath

Reminder of London Protest to Scrap Trident on 27th February, Transport will now go from Paternoster row at 0745 and Meadow Hall 815.

There will also be a protest outside the Town Hall in Sheffield at 10-30 on the 27th February. Kath will be there.

We also talked about promoting Sheffield CND on the Coach to the Scrap Trident Rally.

Jon agreed to send some press releases regarding the Sheffield Protest.

The Sheffield SCRAP group has officially been affiliated with National CND, Sheffield CND has paid the fee.

The SCRAP Memorial quilt is to be displayed at the Bradford Peace Museum from March 17th.

We discussed encouraging more active members to attend our monthly meetings, and promoting this through a presence/stall on the Town hall steps.

.There will be a Drones demo on the 19th March at RAF Waddington, we talked about arranging Transport between SCRAP and Sheffield CND. Also to be in touch with the Drones Network (Penny Walker). We discussed that Helen johns is less involved now.

We will ask Matt and YCND regarding the Peace in the Park event on June 11th.

Hiroshima Peace Picnic, at Meersbrook Park Sunday 7th August – SCRAP will organise this year with support from CND. We will look at inviting the Mayor. 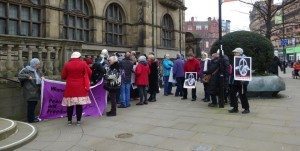