Westminster has agreed a £37 million deal with the US government for a dozen huge new Trident missile launchers more than a year before the UK parliament is due to decide whether the nuclear weapons system should be renewed.

The US defence giant, General Dynamics, has been contracted by the US Navy to make 12 launch tubes for a UK submarine that could start to replace those currently on the Clyde next decade. According to the US Navy, the company will end up making a total of 48 missile tubes for four new UK nuclear submarines.

But the UK parliament is not scheduled to take the main decision on whether or not Trident nuclear weapons should be renewed, or how many submarines there should be, until 2016 after next year’s general election. This has angered leading Nationalist and Labour politicians, who accuse the UK government of preempting a democratic decision.

The deal to equip UK submarines with 12 missile launch tubes each is also at odds with the UK government’s oft-repeated disarmament promise that it would only use eight. Critics fear that future governments could load the four additional tubes with missiles and hugely expand the UK’s nuclear firepower. The UK government is also facing allegations that it misled the public and the United Nations (UN) over the number of tubes, though this is denied.

The SNP’s Westminster leader, Angus Robertson MP, warned that such “startling” revelations should sound alarm bells. “It looks very much as if the MoD is planning to vastly increase capacity and capability to fire nuclear weapons of mass destruction,” he declared.

Including multi-million-pound launch tubes that weren’t going to be used was “farcical”, he argued. The decision to spend £37 million on the tubes “gave the lie” to the pretence that the UK government hadn’t already decided to renew Trident, he said.

He added:  “I am going to take the earliest opportunity to raise this at Westminster and I want an explanation to why these submarines will have at best empty tubes or at worst be armed with more weapons of mass destruction.”

Sarah Boyack MSP, who is one of the candidates standing to become Labour’s Scottish leader, was “extremely concerned” that the decision to renew Trident was being taken as read. “The MoD should not be pre-empting a decision of the UK parliament,” she said.

“It’s unacceptable that we’re finding this out from US sources rather than the UK government. Spending billions on acquiring a new weapons system would be going in the wrong direction.”

The launch tubes, which are made in packs of four, are 45 feet long and wide enough to stand up in. They each weigh more than 50 tonnes, about two thirds the weight of the space shuttle.

The US Navy disclosed that it has awarded a contract to General Dynamics Electric Boat for the construction of 17 launch tubes, 12 of which are for a UK submarine. The total value of the contract is £53 million, and 70 per cent of the cost is being met by the UK government.

The plan is for General Dynamics to make a further 36 tubes for three more UK submarines. The new contract “represents over five years of design and prototyping efforts between the US and UK governments and their respective industry partners,” said the US Navy.

But in a 2010 defence review, the UK government promised it would “reduce the number of operational launch tubes on the submarines from 12 to eight”. This was part of a “commitment vigorously to pursue multilateral global disarmament”, it said, and would help reduce costs by £3.2 billion over ten years.

On 19 October 2010, the UK’s disarmament ambassador, John Duncan, told the UN that the plan was to “configure the next generation of submarines accordingly with only eight operational missile tubes.”

The US, however, has insisted on having 12 missile tubes per boat, and it now looks like its view has prevailed. According to the Ministry of Defence (MoD), new UK submarines will still have only eight “operational” tubes, but it has refused to say what will happen with the other four.

“Unfortunately we’re not able to go into that level of detail at this stage,” an MoD spokeswoman told the Sunday Herald. Past evidence, however, has prompted speculation that large concrete blocks may need to be inserted as ballast.

John Ainslie, coordinator of the Scottish 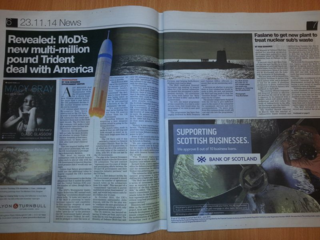 Campaign for Nuclear Disarmament, accused the government of misleading the public and the UN by implying that the number of tubes would be cut to eight. He pointed out that the first Trident submarines were designed in the 1980s with four extra tubes so that more missiles could be loaded if wanted.

“History is now repeating itself,” he said. “The MoD is leaving open the possibility that a future government could increase Britain’s nuclear firepower by 50 per cent.”

Some of the launch tubes for the existing Trident missiles were made by Babcock in Renfrew. “We are repeatedly told that Trident creates jobs in Scotland, but the reality is that the MoD has chosen to do a multi-million pound deal with General Dynamic in the US,” he said.

“The Trident replacement programme is out of control, like a runaway train without a driver. At a time of cuts to public services, the MoD is squandering millions of pounds on extra missile tubes.”

Richard Scott, a naval consultant editor for the defence journal, IHS Jane’s, thought that the momentum for renewing Trident was gathering pace, though the main investment decision was still more than a year away. “The submarine design and development programme is already shifting into a higher gear,” he said.

“The MoD has already approved a series of investments which it sees as essential to the on-time delivery of the first submarine in 2028,” he added. “The UK government’s commitment to buy the 12 missile tubes for the first successor boat represents one of a number of critical long lead procurements to support delivery.”

Ministers had committed almost £80 million to the successor submarine project, Scott said. Money had gone towards the development of a common missile compartment with the US, the modernisation of facilities at BAE Systems’ submarine yard at Barrow-in-Furness and helping Rolls Royce develop a new reactor plant.

The MoD confirmed that General Dynamics was making 12 launch tubes for a UK nuclear submarine but denied that this preempted a parliamentary decision. “No submarines are being built before the ‘Main Gate’ decision in 2016,” said an MoD spokeswoman.

“As with any major programme of this complexity, it is vital to order certain items that would delay the programme if we were to wait until Main Gate. The programme has been thoroughly reviewed by MoD, Treasury and Cabinet Office officials to ensure that we are minimising early spend and that it represents value for money.”

A decision on whether to procure three or four submarines would be made in 2016, she said. “We are committed to maintaining the deterrent at the minimum level that we judge necessary.”

The spokeswoman insisted that the MoD had long made it clear that the “baseline design” for new submarines was for 12 tubes. “The successor submarines will deploy with up to 40 nuclear warheads carried on eight operational missiles,” she said.

The missile compartment designed with the US “provides sufficient space in the central part of the submarine for a range of other equipment and services – including the crew accommodation,” she added. “To move away from this common design would add cost and risk into the programme.”