Protest at US military base in Okinawa

Dave Webb (co-convenor of YCND)  is on an ‘Okinawan Study Tour’ as part of the Global Network’s annual meeting and conference in Kyoto this week. He sent us this report:

This is the protest at the US military base due to be extended in Okinawa, Japan. The protest about military bases has been continuous here for over 11 years! This morning we joined over 350 people at the Heneko US Marine base is in danger of being extended into the bay destroying a beautiful coastline and against the wishes of the vast majority of the islanders. We were there from 5.30 am for 2 hours but the usual convoy of vehicles did not arrive at the usual time. We heard later that they has waited until the foreign delegation (i.e. us) had left and then they came and the police physically removed the protestors from blocking the gate. More on this and other things later! 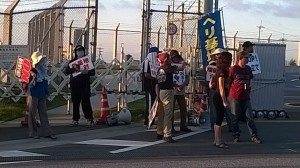 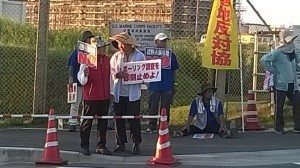