A report from Dave Webb live from the Non-Proliferation Treaty in New York…
The delegates and ambassadors of the nuclear weapon states continue to present their statements to the NPT Review Conference, demonstrating their failure and apparent complete lack of concern at making no progress with their obligation under Article 6 of the Treaty, to disarm. 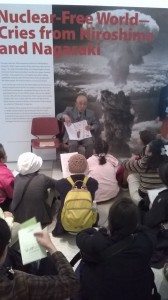 Meanwhile, Mr Keiji Tsuchiya, who was a soldier engaged in rescue and aid in Hiroshima just after the bombing, relates his story at the Atomic Bomb Survivors exhibition in the United Nations visitors area. Mr Tsuchiya was 17 when the bomb was dropped – he describes the scene that met his eyes: wreckage and debris everywhere, burned and blackened trains, blackened corpses and procession of badly burned and disoriented people.

Dragging out people crying in agony from the rubble; retrieving and cremating dozens of bodies being swept along the river, he cried to heaven “God, why have you done such a cruel thing?”

During the rescue and aid mission they would drink and wash in the rain water – unaware that it was radioactive. Later he was to suffer acute hepatitis and stigmoid colon cancer for years afterwards and was hospitalized for 80 days. He survived thanks to many operations and continual treatments.

His message now is clear – he has come to the NPT, along with many other survivors and 1000 Japanese anti nuclear campaigners, bearing the message addressed to all of us – but especially to the delegates to the conference – that we must work a lot harder to build a peaceful 21st century and a world without nuclear weapons and wars.

Everyone, he says, let us strive together – I believe we can do it!