A recent article in the Guardian (“What you need to know about PFAS, the chemicals in pizza boxes and rainwear”, 23rd May, by Lauren Zanolli) outlined the problems of Per and Poly Fluoroalkyl Substances (PFAS). They are long molecules held together by the strongest chemical bonds ever produced. They repel grease, oil, and fire better than anything else ever developed but they don’t degrade.

In the US they have been linked to health problems including miscarriages and other severe pregnancy complications. They contaminate human breast milk and sicken breast-feeding babies. PFAS are also thought to contribute to liver damage, kidney cancer, high cholesterol, an increased risk of thyroid disease, along with testicular cancer, micro-penis, and low sperm count in males. Dangerous levels of them are being found in drinking water.

A presentation at the “Stopp Ramstein 2019” peace camp and protest, by Pat Elder from World BEYOND War, at the end of June has also shown that these dangerous chemicals are used in fire-fighting foams routinely deployed on NATO bases (more details here).

For training purposes, U.S./ NATO forces at airfields create massive, jet fuel fires then extinguish them using these foams. Afterward, the residue is allowed to sink into the ground to pollute the soil, sewers, and groundwater. The US military also uses sprinkler systems in hangars to create foam to coat expensive aircraft. The foam systems can cover a 2-acre hangar with 17 feet of foam in two minutes.

The EU has set standards for individual PFAS of 0.1 μg/l (micrograms per litre) and for total PFAS of 0.5 μg/l in groundwater and drinking water. Harvard University public health scientists say .001 μg/l of PFAS in our water is potentially hazardous and the US Environmental Protection Agency (EPA) has set a standard of .07 μg/l in drinking water and groundwater. However, the EPA’s measure is only voluntary while the military and industry have contaminated water systems across the U.S.

At Ramstein, groundwater was found to contain 264 μg/l of PFAS – 2,640 times above the EU threshold.

The concentration of PFAS in the Glan River, below the confluence of the Mohrbach River 11 kilometers from Ramstein, was 0.35 μg/l of PFOS (Perfluorooctanesulfonate) in 2013. This is 538 times the level the EU says is safe.

It also appears that the contamination of waterways on the Japanese island of Okinawa has almost certainly come from firefighting foams containing PFASs used at the US Kadena Air Base and Marine Corps Air Station Futenma.

If you live near a US military base, especially one where US aircraft are housed, it is strongly recommended that you look into the possible contamination of surface water or groundwater by PFAS – check with your local health and environmental offices. 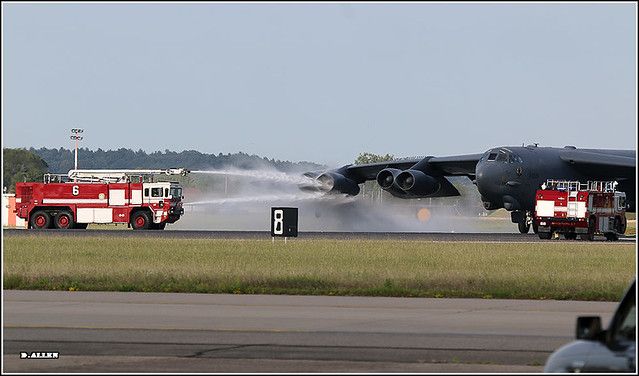 Firefighters extinguish a fire on a B52 bomber engine at Mildenhall, June 17th 2019
– are they using water or fire fighting foam?