Warsaw is a beautiful city which has been restored after being totally destroyed by Nazi troops during the Warsaw Uprising in August 1944. A post-war 5-year reconstruction campaign by Warsaw citizens restored the churches, palaces and market-place of the Old Town. 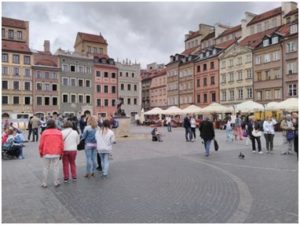 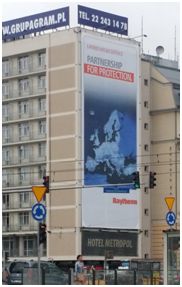 It was though, sad to see NATO flags flying in a number of places and projections of the logo on buildings as well as propaganda from Raytheon, corporate partner with NATO, who advertised their role in the US/NATO missile defence system, a  component of which (Aegis Ashore) is soon to be installed in Poland. NATO made their presence here from 8-9th July for their summit conference quite clear.

It is rare that anything positive comes from a NATO summit and this one was no exception. Before the meeting, NATO Secretary General Jens Stoltenberg had declared that this would be NATO’s biggest reinforcement since the Cold War – and he was right! Despite a 1990 agreement not to push NATO further east after the reunification of Germany and a 1997 pledge not to install ‘permanent and significant’ military forces in former Warsaw Pact countries, multinational battalions of NATO troops are to be deployed to Romania, Latvia, Lithuania, Estonia and Poland, with the UK sending troops to the two latter countries. Russia has repeatedly expressed concern about the destabilising build up of NATO troops on its doorstep and the increased number of huge NATO exercises in Europe and Scandinavia.

NATO also restated its commitment to being a nuclear alliance for “as long as nuclear weapons exist”.  Around 180 tactical B-61 nuclear bombs are deployed in Europe under the NATO nuclear sharing arrangement, currently stored in Belgium, Netherlands, Germany, Italy and Turkey. They are set to receive a US upgrade by 2019-20 that will turn them into guided missiles to be carried by stealth F35 bombers which the host nations will have to purchase. Delivered in this way they will need to be lower yield bombs, which will make them more usable.

The summit also declared NATO’s Ballistic Missile Defence (BMD) system in Europe as having an ‘Initial Operational Capability’. Current parts of this system include the command and control centre at NATO’s Air Command HQ in Ramstein Germany; four US missile defence destroyers based at Rota in southern Spain; a forward-based early-warning radar at Kürecik in Turkey and an ‘Aegis Ashore’ missile site in Deveselu, Romania. Further ‘Aegis Ashore’ missiles are due to be stationed in Poland at the Redzikowo military base in 2018. NATO claims that this system is needed to counter threats to Europe by Iran and North Korea, but neither country has actually threatened Europe and the real target is more like to be Russia which has repeatedly expressed concern about this undermining of its deterrent capabilities and has withdrawn from arms control talks as a consequence.

The possibility of NATO taking collective military action is now greatly increased through its recognition of cyberspace as ‘an operational domain, alongside air, land and sea’. Thus cyber attacks can potentially trigger an Article 5 military response (an attack on one country is an attack on all). This is particularly worrying because of the difficulty in determining the source of cyber attacks and technical evidence of them is rarely shared or clarified.

It was decided that NATO’s mission in Afghanistan will remain its largest operation and will be extended until at least 2020. NATO also intends to help Iraq tackle Islamic State with more ‘training’ and ‘capacity building’. Although NATO has stated it will not be increasing its membership soon, it has agreed a ‘Comprehensive Assistance Package’ for Ukraine and assistance to Georgia and Moldova “to resist outside pressure and to advance reforms.” Also to further provoke Russia of course.

To resource all these actions and more, Stoltenberg has said that he expects a real increase of 3% in defence spending by European members and Canada, amounting to an additional $8 billion. So the UK will be expected to pay even more – on top of the unforgiveable £200 billion plus for a replacement for Trident! SIPRI reports that U.S. military spending is 34% of the world’s total spending on defence and all NATO countries together add up to more than half. Russia spends 4% of the world’s total. Who then is the most dangerous? Even so, the demonization of Putin and Russia is good business for the western military industrial complex and so it goes on.

In another worrying development by NATO, not often commented on in the traditional media, it is to continue to help further militarise the EU – which has been developing its own military since the Lisbon Treaty of 2009. The Secretary General signed a Joint Declaration with the Presidents of the European Council and the European Commission to take the partnership between NATO and the European Union ‘to a higher level’.

So, NATO is set to continue to promote military intervention and posturing as the way to resolve differences. This can only provoke military responses from others and will make the situation worse in Iraq, Afghanistan and Ukraine. We have learned from Chilcot that the reasons given for war must always be challenged – and challenged they were. 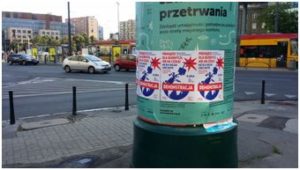 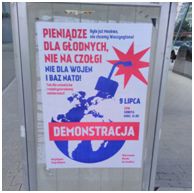 However – wherever there is militarism, there is always opposition and in Warsaw at the same time as NATO, 6 Polish organisations joined with the international Network ‘No to War/No to NATO’ to organise an alternative conference ‘No to War – No to Militarism – Yes to Refugees’. I was one of the 150 or so people from 18 countries who gathered to discuss ideas for developing peace, social justice and a common security in Europe.

The conference was opened by Reiner Braun and the first session invited a number of people to speak on “Why we are against Militarism”. Speakers included myself and activists from the US, Belgium, France, Germany and Eastern Europe. It was only 2 days after the release of the Chilcot Report on the Iraq War in the UK and its damning indictment of Tony Blair and the British government – it was mentioned a number of times. Many admired the fact that it had been carried out and repeated the demand that Blair be put on trial for war crimes.

The conference participants also expressed concern over the dangers of the increasing militarization of Eastern Europe and NATO’s BMD and called for the dissolution of NATO. Many thought that the possibility of a “great war in Europe” was no longer unthinkable and all agreed that the peace movement faces it greatest challenge in years. Others also were very uneasy about the NATO-EU military collaboration and a speaker from the Russian Socialist Movement was clear that the militarism of NATO and Russian militarism are dangerous and must be opposed.

There is also deep concern about the NATO and EU responses to the refugee crisis.  A number of European countries, including Austria and Poland, now have border controls enforced by the military rather than civilian forces and NATO is “assisting” Turkey in securing its border with Syria. The US/NATO response also enables the positioning aircraft carriers etc. close to Syria and Russia.

A report from Germany told us how the German Left Party (Die Linke) had forced a debate in the German Parliament over whether NATO should be dissolved. The European Left is developing a similar resolution to be introduced into European parliaments later in the year.  Hopefully this will encourage public debate.

In the afternoon there were a series of workshops and I spoke at one on nuclear weapons, missile defence and space weapons. Other speakers were Jan Majicek from the Czech Republic who spoke on the development of missile defence in Eastern Europe and Lucas Wirl from Germany, who spoke about the recent demonstration at the huge US military base at Ramstein in Germany – the HQ of US Air Forces Europe. On a rainy day in May around 5,000 people joined the demonstration there and surrounded the base to protest at its role in drone operations and for its command and control of US/NATO missile defence systems in Europe. Also in our workshop we had Ann Wright, former US Army Colonel and diplomat who resigned in protest at the Iraq War. She told us of her experiences in the Pacific region – on Jeju Island and Okinawa in particular.

There were also a number of activists from Belgium who told us of the situation there regarding the US nuclear weapons they host for NATO. I talked about the GN’s work on the militarisation of space and of our up and coming meeting in India. The workshop decided we needed to encourage more communication and information exchange between groups and requested a calendar of international events to be hosted on the ‘No to War/No to NATO’ web site. In addition the Ramstein protest planned for next year should include a conference on military bases and missile defence. So, keep a look out for these.

A public meeting was held in the evening with a number of international speakers. There was a welcome from Barbara Lee recorded on video (organised by Joseph Gerson). Barbara Lee was the only member of either house of US Congress to vote against the authorization of the disaster that was the war in Afghanistan. She has also been critical of the Iraq war and supports the creation of a US Department of Peace. Addressing the conference and public meeting she focused on the urgent need to prevent nuclear war and to move for the complete elimination of nuclear weapons. 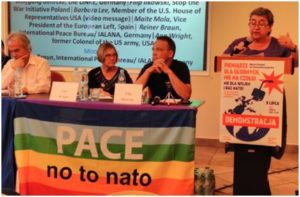 Speakers at the evening public meeting included (left to right) Reiner Braun from Germany, Ann Wright from the US, Filip Ilkowski from Poland (former board member of the GN at the height of the anti BMD campaign there) and Maite Mola, Vice President of the European Left in Spain.

The following day over 300 people joined the march through the city. The Polish people did not like the Russian occupation and the slogan on the banner that lead the march declared “Money for the hungry not for tanks – No to War and NATO Bases – Moscow Has Already Been, We Do Not Want Washington – Yes to Refugees and international solidarity”. 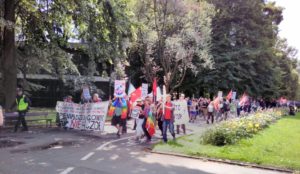 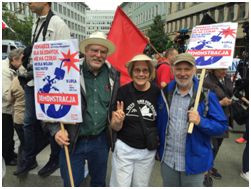 (Left) the march (Right) Joseph Gerson, Ann Wright and me

A recent poll indicated that 20% of Poles oppose NATO – which is more than expected, but probably mostly due to opposition by younger people who do not remember the occupation. The march paused outside the US Embassy and the speaker there was Ann Wright, the former US army colonel who became a US diplomat for 16 years, until resigning in protest over the Iraq war. Since then she has been amazingly active in the peace movement and was involved in the tragic Gaza flotilla. Her first assignment in the military was to NATO, and she spoke about how she is so glad to now be on our side! 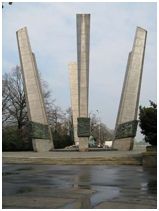 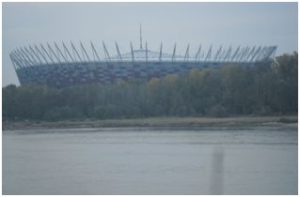 The march arrived at the memorial to Polish sappers who were killed disarming mines and booby traps after the war (left). It symbolises an explosion of an anti-personnel mine and a Polish Sapper about to disarm one. It ended near here by the river where you could still see the memorial to remember those killed in war and a bit further away we could also see the stadium (right) where the NATO summit was playing at planning for the next war.

During the summit, the Warsaw inner city was turned into a high security area by the presence of over 10,000 police and security force. They blocked main roads and all but closed the city for hours. NATO creates disruption wherever it goes and for whatever reason – time surely for it to go now and disappear forever? 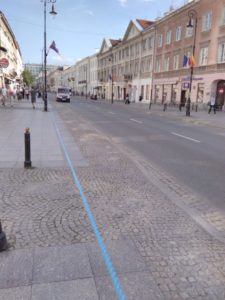 Main streets roped off – ‘not for public use’ during NATO Summit

P.S. – NATO has announced the location for their next summit in 2017 – Brussels, to coincide with the opening of the new NATO HQ there. A strong peace movement exists there and preparations have already begun for protest actions – join in, watch out for details – www.no-to-nato.org