No to War, No to Nato – Dave Webb in Finland

No to War, No to Nato – Dave Webb in Finland
Posted by Matt Fawcett on 24th May 2017 in Missile Defence, news

From Dave Webb in Finland
There was a small but effective protest against the military exercise Arctic Challenge in Rovaneimi. The exercise is being held in Finland, Sweden and Norway and includes a contribution from NATO members such as the UK and the US.

When I arrived at the small airport there on Sunday evening I saw some 12 or 13 fighter jets and a couple of military transporter planes parked not far from the runway where we landed. We returned there early on Monday morning for the protest.

I tried to send a picture of the banners US Army Go Home” and “No to NATO, Yes to Peace”. Not sure they arrived with you though?

There were speeches, signing and even dancing, as the military jets took off with a thunderous, explosive roar that instinctively turned heads and clenched fists.

I spoke of our solidarity with the protest and warned of Finland’s increasing involvement with NATO. In 1994 Finland, a once proudly independent and peace loving country, joined NATO’s ‘Partnership for Peace’ and then in 2014 signed a ‘Host Country’ agreement which enables NATO to store equipment there and move forces through the country. There was no discussion about this in the Finnish Parliament! 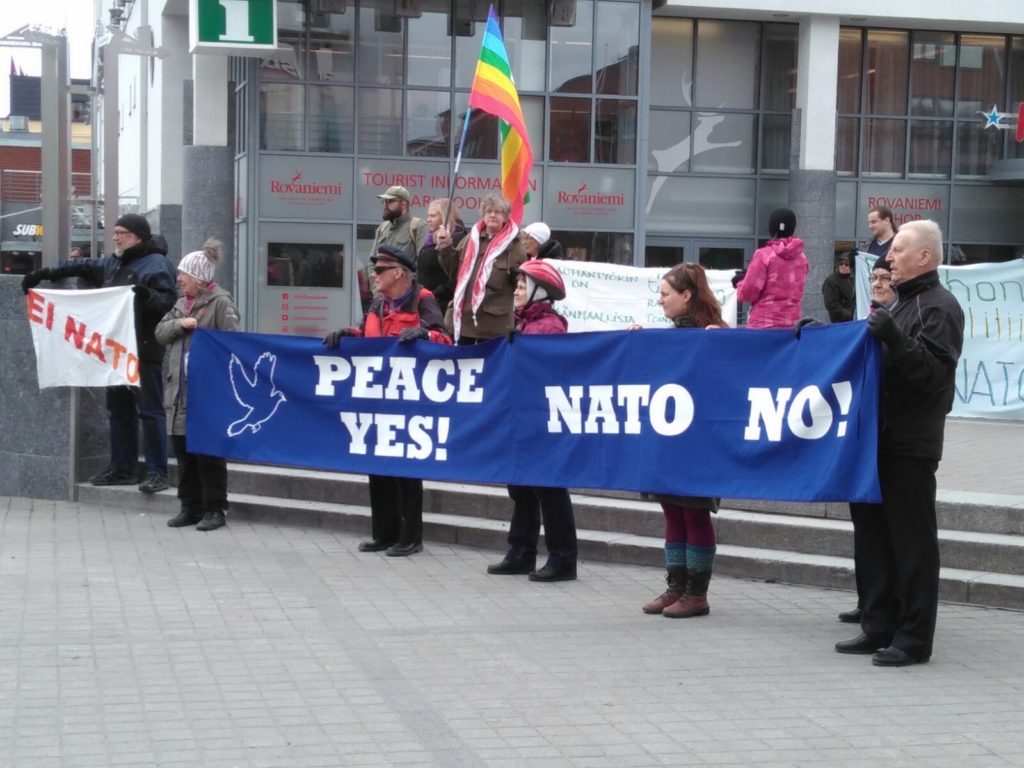 The demonstration included a speech from a local council member and another from Agneta Norberg from Sweden. It was reported the next day in the local newspaper with pictures and quotes from the protestors.
A little later we moved on to the centre of Rovaniemi and stood with banners there in protest for a while.
In the afternoon there was a seminar at the university where I spoke about the Arctic Challenge exercise and the role of space technology. About 30 people attended. I specifically mentioned the places of importance to space technology in Scandinavia, such as the Vidsel test range and Kiruna and Esrange space centres in Sweden and the Arctic Space Centre in Sodankyla, Finland.

I also pointed out that the ‘Operation Joint Warrior’ exercise, held twice a year off the coast of Scotland by the Royal Navy and NATO partners, had a drones component last year. Called ‘Operation Unmanned Warrior’ it featured airborne and undersea drones for the first time.

It will be interesting to see if they are used during Arctic Challenge.

The exercise goes on until June 2nd but I am moving to Brussels to take part in the anti NATO protest at the Summit there.

Thanks to Kersten our wonderful host in Finland., we did visit the Arctic Space Centre in Sodankyla – but more of that next time!

For now say No to war and No to NATO!