More for the military means less for global security

More for the military means less for global security
Posted by Dave Webb on 20th November 2020 in Analysis, General

Boris Johnson’s announcement of an increase of £16.5 billion to the Ministry of Defence over the next four years, once again shows how wrong his priorities are. Rather than dealing with the real threats that we face – climate change and dealing with the coronavirus pandemic and its after effects – the Prime Minister has decided on an increase in military spending. And this is occurring despite the fact (according to figures issued by SIPRI – the Stockholm International Peace Research Institute) that even before the increase, the U.K. is the fourth highest military spender in the world, behind the U.S., China and India. 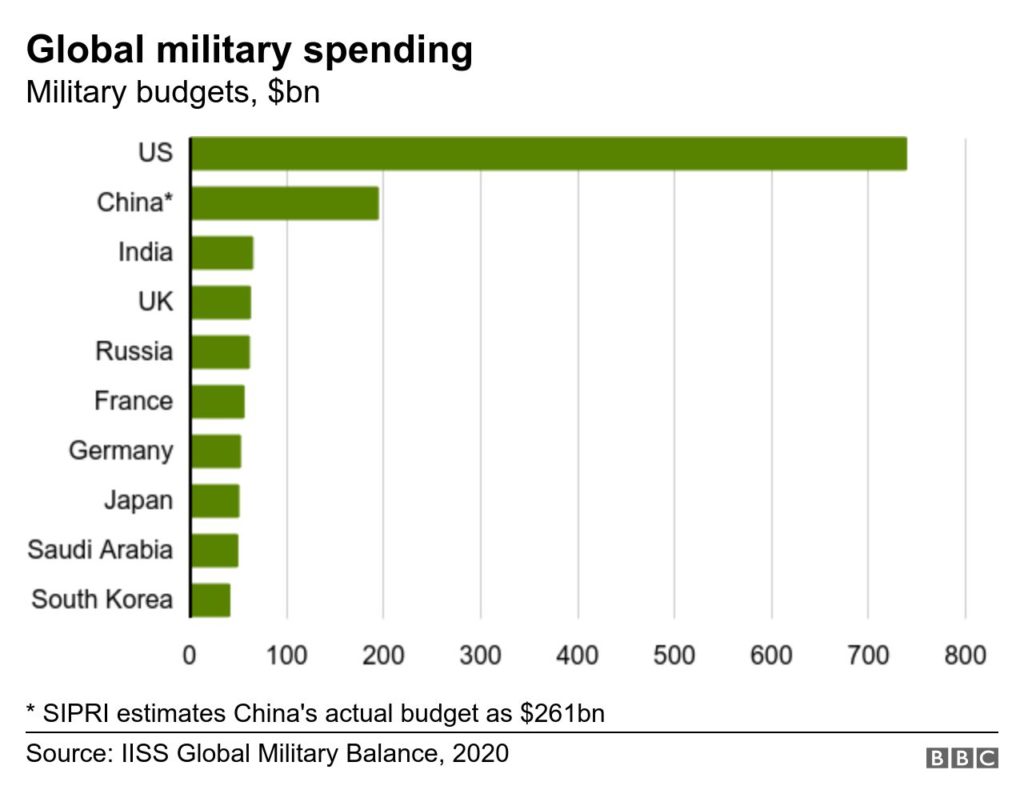 In addition to this, Mr Johnson has not ruled out the possibility of cutting spending on overseas development from 0.7% of GNI to 0.5% despite previous government commitments. £2.9 billion has already been cut from this budget for the rest of the year in order to avoid spending more than the 0.7% at a time when the poorest countries are suffering the most from the effects of the pandemic.

“Boris Johnson’s decision to approve the biggest increase in defence spending in decades shows that the Government is completely out of touch with the real threats to Britain’s security.

When In the face of the climate emergency, the coronavirus pandemic, and a major economic downturn, the Government is spending billions on weapons systems and extending sabre-rattling to outer space.

Instead of properly funding the NHS and fixing the test and trace disaster, Boris Johnson seems to have opted for a cold war tribute act.

The Government yesterday promised £12 billion to combat climate change, paling in comparison to the investments being made by other European countries. And now they are throwing £16.5 billion behind an outmoded attempt to project global military power.

Without doubt this budget increase will include additional spending on Britain’s nuclear weapons system, Trident, notably on new nuclear warheads.

Boris Johnson could choose to help ensure real security for Britain and for the planet by seriously tackling climate change, preparing for future pandemics, and joining a renewed global push for abolition of nuclear weapons.

By instead boosting spending on military posturing and weapons systems, he will help increase global tensions and escalate the risk of a new arms race.”

The extra money for the military will be used to ‘modernise’ the armed forces and will mean that more will be spent on robots, autonomous systems, cyber and space. On the announcement of a new ‘space command’ as part of the MoD funding package, CND Chair Dave Webb also commented that:

“The Government is clearly eager to play a role in the expected space boom. But its participation in Operation Olympic Defender (the US-led international coalition) and the involvement of Lockheed Martin in establishing new space hubs in the UK both suggest the return of space as an arena for military confrontation and competition.

We should be pushing for strengthening the Outer Space Treaty – not working to further the militarisation of space.”

And Richard Reeve, Co-ordinator of ‘Rethinking Security’ said that:

“A return to cold war confrontation makes us all less safe and does nothing to address health crises, ecological collapse or colossal inequalities.

The government’s spending calculus is a retrograde step that would reverse two decades of rebalancing from defence to development, coercion to cooperation. The Integrated Review is disintegrating before our eyes.”