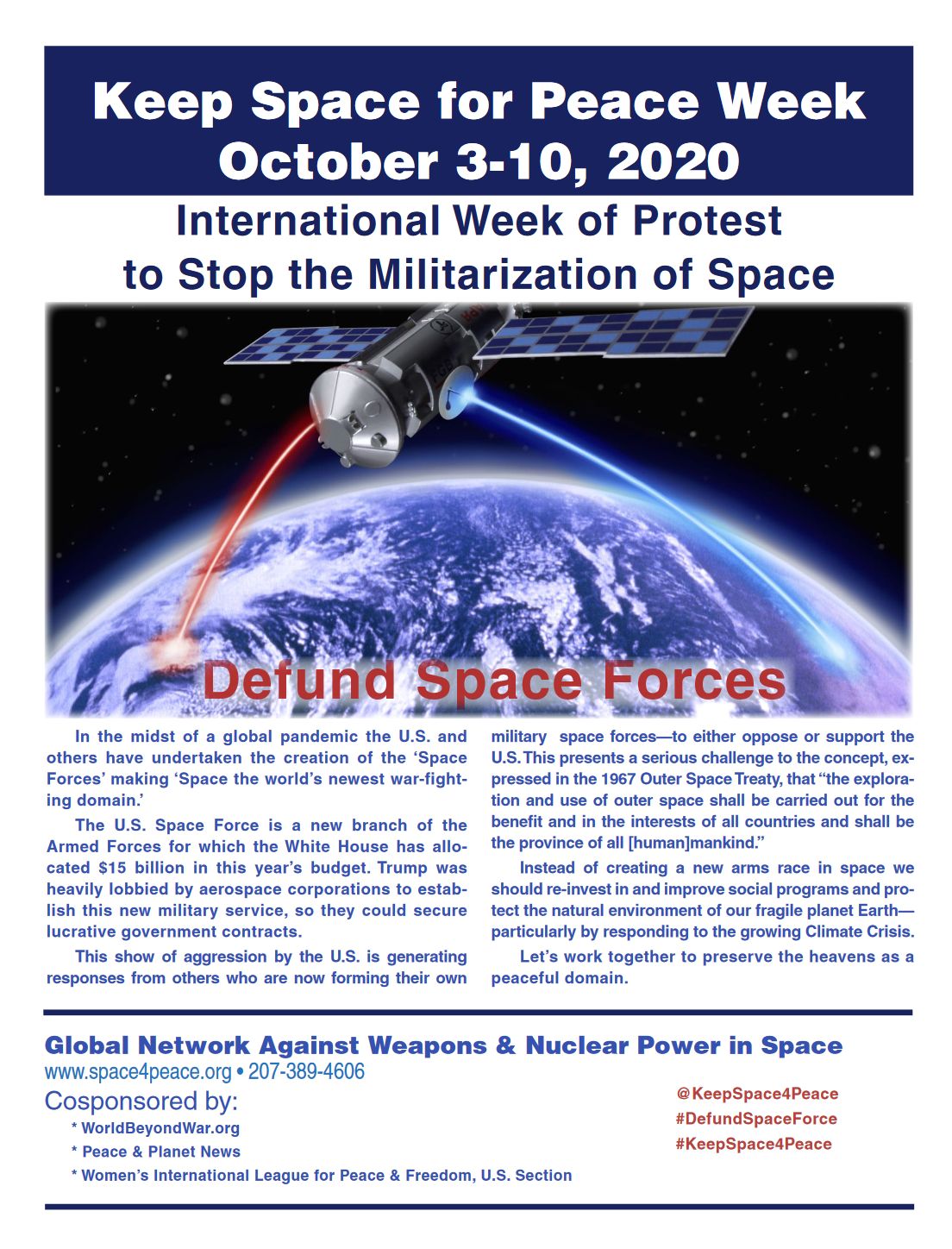 In 1999 the United Nations General Assembly declared that World Space Week should be held from October 4-10 every year. This time has also been adopted as Keep Space for Peace Week by the Global Network Against Weapons and Nuclear Power in Space . The poster for the event this year is shown on the left and can be downloaded from the Global Network website here. There may not be the usual world-wide activity at bases associated with space militarisation this year, for obvious reasons, but perhaps we can spread the word and encourage involvement in other ways? These are some of the online events planned: 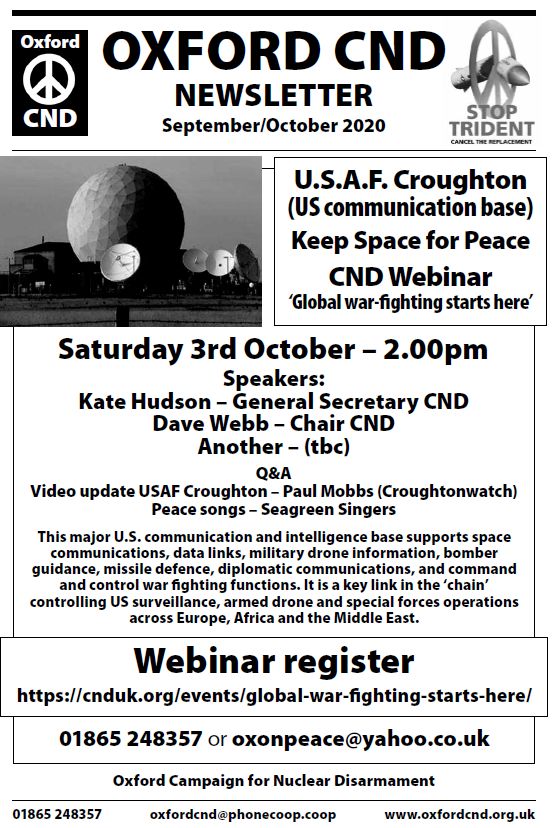 1. 3rd October – Oxford CND are organising a webinar at 2pm focussing on ‘USAF Croughton‘ called ‘Global war-fighting starts here‘ it will feature speeched from Kate Hudson and Dave Webb with a video update of the base from Paul Mobbs and Peace songs from the Seagreen Singers. You can register for the webinar here. Croughton is a major U.S. communication and intelligence base supporting space communications, data links, military drone information, bomber guidance, missile defence, diplomatic communications, and command and control war fighting functions. It is a key link in the ‘chain’ controlling US surveillance, armed drone and special forces operations across Europe, Africa and the Middle East.

2. 8th October – The Global Network are organising a webinar at 3pm UT on Campaigning on ‘Space Domination’:

How can we confront the rapidly increasing militarisation and possible weaponization of space? When the US Space Force was established last year President Trump said that it marked “a big moment” and that there was “going to be a lot of things happening in space. Because space is the world’s newest warfighting domain.” A new generation of space weapons – episode 2 of Reagan’s Star Wars – is In the cards. The U.S., Russia, China and India have extensive military space programmes and tested ASATs and the UK, France, NATO, Japan and South Korea have either established or are working towards their own military Space Forces. Keep Space for Peace Week gives us an opportunity to focus on the challenges presented by the rush to exploit space. GN Convenor Professor Dave Webb introduces a panel of GN experts: Professor Karl Grossman (U.S.), Tamara Lorincz (Canada), Sung-Hee Choi (South Korea), Denis Doherty (Australia) and GN Coordinator Bruce Gagnon (U.S.) to discuss ways in which we can face these challenges.

Register for the meeting here: https://us02web.zoom.us/webinar/register/WN_wOxEQ4elRCGbfi0G8ZfHew

3. 10th October – Yorkshire cnd and the Menwith Hill Accountability Campaign are organising a webinar at 2pm – linking Fylingdales and Menwith Hill but emphasising their different roles.

Fylingdales, on the North York Moors, is an operational military base supporting the US developing Missile ‘Defence’ system. A short film about Fylingdales, made by Yorkshire CND, will be shown. Menwith Hill is an intelligence gathering base run by the US National Security Agency, which is used for monitoring, surveillance, drone operations and as part of the Missile ‘Defence’ system.

Speakers:  include Will Griffin from the Global Network, who recently made a film about the role of Menwith Hill Base and will be showing extracts from the film. Invitations have also been passed on to to local M.P.s.

It is hoped that a small token presence at each of the bases will take place and form part of the live event.

Please join us for this meeting on Zoom. Just request your link to join the Zoom meeting by emailing info@themhac.uk.

4. 15th October – The Global Network is organising an online panel from 18:20-19:30 UT on “Campaigning to Keep Space for Peace” at the “Space Education and Strategic Applications Conference”

This free 2-day conference is organised by the Policies Studies Organization and will be entirely virtual. More details and program are available here: http://www.ipsonet.org/conferences/space-education-and-strategic-applications/sesa20program

The panel will be introduced and chaired by Professor Dave Webb (UK) with Professor Karl Grossman (US), Tamara Lorincz (Canada), Dr Aruna Kammila (India) and Bruce Gagnon (US). The panel members will discuss different aspects of the problems associated with the continuing militarisation of space and creating a global resistance to Keep Space for Peace.

You can register for the conference here: http://www.ipsonet.org/conferences/space-education-and-strategic-applications/sesa20program. 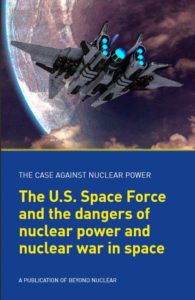 We have just received some copies of this new booklet from the U.S. group ‘Beyond Nuclear’. The booklet came about at the initiative of Professor Karl Grossman, who is its lead author. Professor Grossman is a professor of journalism, prolific author, and broadcaster. He is a member of the boards of the Global Network and Beyond Nuclear.

A copy of the booklet can be downloaded from here or can be obtained from the Yorkshire CND office.

The booklet ends with:

“Space is for wonder, not warfighting. It’s where we live. We are a small dot in the midst of enormity, floating in a dark vastness about which we know a surprising amount, and yet with so much more still yet to discover. But if the heavens are armed, there will be no going back.

“We must all join together to stop this unparalleled catastrophe in the making. More than half of U.S. discretionary spending already goes to the military, with just slivers left for essential services such as health care, education and social services. As the world grapples with climate change and pandemics, it has never been more urgent to avoid arming our final frontier – space – with deadly weapons of mass destruction. The Space Force will not ‘Make The Galaxy Great Again’ as its supporters have emblazoned on t-shirts. But we can, by ensuring that space – as well as Earth – is a place for peace.”