Geneva, August 24, 2015. The International Peace Bureau (IPB) is delighted to announce its decision to award the annual Sean MacBride Peace Prize to two island communities who, in different circumstances, show proof of a profound commitment to peace and social justice.

LAMPEDUSA is a small island in the Mediterranean and is the southernmost part of Italy. Being the closest part of the territory to the African coastline, it has been since the early 2000s a primary European entry point for migrants and refugees. The numbers of persons arriving has been rapidly increasing, with hundreds of thousands at risk while travelling, and over 1900 deaths in 2015 alone. 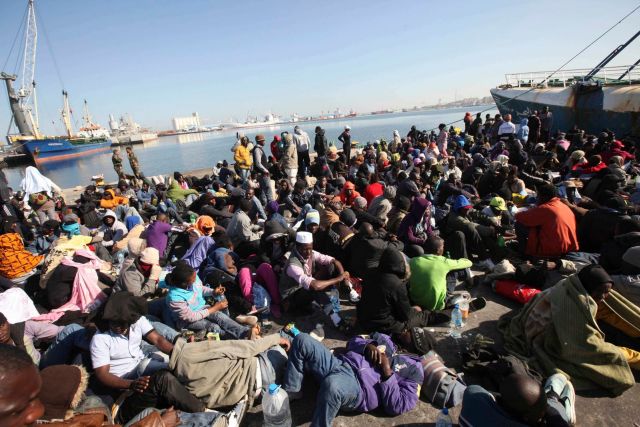 The people of the island of Lampedusa have given the world an extraordinary example of human solidarity, offering clothing, shelter and food to those who have arrived, in distress, on their shores. The response of the Lampedusans stands out in stark contrast to the behaviour and official policies of the European Union, apparently intent only on reinforcing their borders in the attempt to keep these migrants out. This ‘Fortress Europe’ policy is becoming more and more militarised.

Aware of its multi-layered culture, which epitomizes the evolution of the Mediterranean region where over the centuries different civilizations have blended and built on each others’ developments, with mutual enrichment, the island of Lampedusa also shows the world that a culture of hospitality and respect for human dignity are the most effective antidotes to nationalism and religious fundamentalism.

To give but one example of the heroic actions of the people of Lampedusa, let us recall the events of the night of 7-8 May 2011. A boat full of migrants crashed into a rocky outcrop, not far from the shore. Although it was in the middle of the night, the inhabitants of Lampedusa turned out in their hundreds to form a human chain between the shipwreck and the coast. That night alone more than 500 people, including many children, were carried to safety.

At the same time the people of the island are very clear that the problem is a European one, not theirs alone. In November 2012, Mayor Nicolini sent an urgent appeal to Europe’s leaders. She expressed her outrage that the European Union, which had just received the Nobel Peace Prize, was ignoring the tragedies occurring on its Mediterranean borders.

The IPB believes that the dramatic situation in the Mediterranean – constantly visible in the mass media – must be at the top of Europe’s urgent priorities. Much of the problem springs from social injustices and inequalities resulting in conflicts in which the West has – over centuries — played an aggressive role. We recognise that there are no easy solutions, but as a guiding principle, Europe should be honouring the ideals of human solidarity, over and above the cynical considerations of governments and profit/power/resource-seeking entities. When Europe contributes to the ruining of the livelihoods of people, as for instance in Iraq and Libya, Europe will have to find ways to help rebuild those livelihoods. It should be below the dignity of Europe to spend billions on military interventions, and yet not to have the resources available to meet the basic needs. The most vital question is how to develop cooperation between people of goodwill on both sides of the Mediterranean in a long-term, constructive, gender-sensitive and sustainable process.

GANGJEON VILLAGE is the site of the controversial 50-hectare Jeju Naval Base being constructed by the South Korean government on the southern coast of Jeju Island, at a projected cost of nearly $1 billion. The waters around the island are protected by international law as they are within a UNESCO Biosphere Reserve (in October 2010, nine geological sites on on the island were recognised as Global Geoparks by the UNESCO Global Geoparks Network). Even so, the construction of the base continues, although building work has been halted many times by mass protests of people concerned about the base’s environmental impact. These people see the base as a US-driven project aimed at containing China, rather than enhancing South Korean security In July 2012, the South Korean Supreme Court upheld the base’s construction. It is expected to host up to 24 US and allied military vessels, including 2 Aegis destroyers and 6 nuclear submarines, plus occasional civilian cruise ships on completion (now scheduled for 2016). 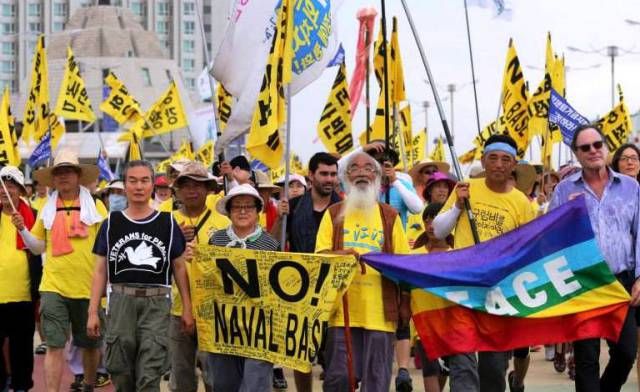 Jeju Island has been dedicated to peace ever since around 30,000 were massacred there from 1948-54, following a peasant uprising against US occupation. The South Korean government apologized for the massacre in 2006 and the late President Roh Moo Hyun officially named Jeju an “Island of World Peace”. This violent history[1] helps to explain why the people of Gangjeon Village (population 2000) have been protesting non-violently for around 8 years against the naval base project. According to Medea Benjamin of Code Pink, “About 700 people have been arrested and charged with hefty fines that amount to over $400,000, fines that they cannot or will not pay. Many have spent days or weeks or months in jail, including a well-known film critic Yoon Mo Yong who spent 550 days in prison after committing multiple acts of civil disobedience.” The energy and commitment shown by the villagers has attracted the support (and participation) of activists from around the world[2]. We endorse the construction of a permanent Peace Center on the site which can act as a focus for activities reflecting alternative views to those represented by the militarists.

IPB makes the award in order to increase the visibility of this exemplary non-violent struggle at a crucial time. It takes great courage to physically oppose the government’s growing aggressive and militaristic policies, especially as they are backed by, and at the service of, the Pentagon. It takes even more courage to maintain that struggle over a period of many years.

There is an important connection between the two situations. Not only do we recognise the common humanity of those who resist without weapons the forces of domination in their own island. We make the argument that public resources should not be spent on massive military installations that only increase the tension between nations in the region; rather they should be devoted to meeting human need. If we continue devoting the world’s resources to military rather than humanistic purposes, it is inevitable that we will continue to witness these inhuman situations with desperate people, refugees and migrants, at risk while crossing the seas and at the prey of unscrupulous gangs. Thus we repeat also in this context the basic message of IPB’s Global Campaign on Military Spending: Move the Money!

About the MacBride Prize 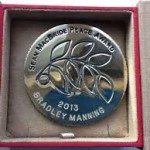 The prize has been awarded each year since 1992 by the International Peace Bureau (IPB), founded in 1892. Previous winners include: the people and government of the Republic of the Marshall Islands, in recognition of the legal case submitted by the RMI to the International Court of Justice, against all 9 states with nuclear weapons, for failure to honour their disarmament commitments (2014); as well as Lina Ben Mhenni (Tunisian blogger) and Nawal El-Sadaawi (Egyptian author) (2012), Jayantha Dhanapala (Sri Lanka, 2007) the Mayors of Hiroshima and Nagasaki (2006). It is named after Sean MacBride and is given to individuals or organisations for outstanding work for peace, disarmament and human rights. (details at: http://ipb.org/i/about-ipb/II-F-mac-bride-peace-prize.html)

The (non-monetary) Prize consists of a medal made in ‘Peace Bronze’, a material derived from recycled nuclear weapons components*. It will be formally awarded on October 23 in Padova, a ceremony that forms part of the annual Conference and Council meeting of the International Peace Bureau. See details at: www.ipb.org. A further bulletin will be issued closer to the time, with details of the ceremony and information relating to requests for media interviews. 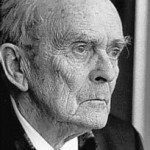 Sean MacBride was a distinguished Irish statesman who was IPB Chairman from 1968-74 and President from 1974-1985. MacBride began as a fighter against British colonial rule, studied law and rose to high office in the independent Irish Republic. He was a winner of the Lenin Peace Prize, and also the Nobel Peace Prize (1974), for his wide-ranging work. He was co-founder of Amnesty International, Secretary-General of the International Commission of Jurists, and UN Commissioner for Namibia. While at IPB he launched the MacBride Appeal against Nuclear Weapons, which gathered the names of 11,000 top international lawyers. This Appeal paved the way for the World Court Project on nuclear weapons, in which IPB played a major role. This resulted in the historic 1996 Advisory Opinion of the International Court of Justice on the Use and Threat of Nuclear Weapons.

The International Peace Bureau is dedicated to the vision of a World Without War. We are a Nobel Peace Laureate (1910), and over the years 13 of our officers have been recipients of the Nobel Peace Prize. Our 300 member organisations in 70 countries, and individual members, form a global network which brings together expertise and campaigning experience in a common cause. Our main programme centres on Disarmament for Sustainable Development, whose central feature is the Global Campaign on Military Spending.