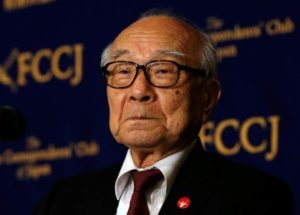 Terumi Tanaka, a survivor of the atomic bombing and head of a national organisation of bombing survivors called Nihon Hidankyo

We are delighted and honoured to welcome to Bradford some Hibakusha, survivors of the Atom Bombs that were dropped on Japan in 1945.

There is a packed itinerary for the delegation including a formal welcome from the University and the Lord Mayor.

Everyone is welcome to attend the open event at 12-12.45pm in the Norcroft Centre at the University of Bradford-

An audience with Terumi TANAKA, survivor of the Nagasaki A-Bomb.

The co-author of Those Days… and Realities of Hiroshima and Nagasaki (Shin-Nihon Publishing Co., Ltd), and Peace Archives “Hiroshima and Nagasaki” (Iwanami Shoten Publishers) will give an insight into his experiences and his work going forward as Secretary General of the Japan Confederation of A-and H-Bomb Sufferers Organizations (Nihon Hidankyo).

At age 13, he experienced the Nagasaki A-bomb inside his house located 3.2 kilometers from the blast center. He lost five of his family members all at once. He cremated the body of his aunt in the field, who survived only a few days after the bombing with heavy burns. He went on to graduate from the Tokyo University of Science in 1960 and he was conferred with a Degree of Doctor of Engineering by Tohoku University, 1995.