Across Yorkshire this last weekend, there were multiple events held by several local peace groups paying their respects to the victims and survivors of the Hiroshima & Nagasaki atomic bombings. 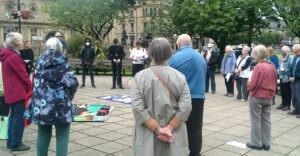 On Saturday 7th August, Bradford & District CND assembled by the Hiroshima Memorial in Norfolk Gardens, where they were joined by local peace campaigners and the Deputy Lord Mayor Cllr Bev Mullaney to remember all the victims of nuclear weapons. It was followed by a lively and well-attended social which involved speeches, choir and ukuleles! 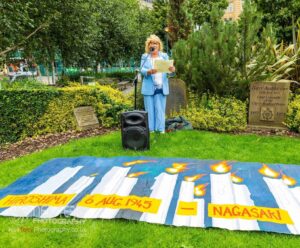 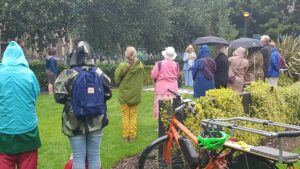 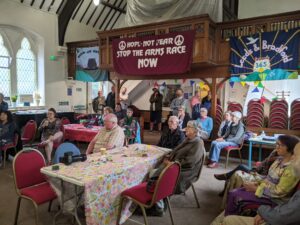 On the same day, Sheffield Creative Action for Peace (SCrAP) gathered for a short vigil commemorating the victims of Hiroshima and Nagasaki. They placed flowers and placards next to the plaque in the Peace Gardens and then moved on to the steps of the City Hall where a minute’s reflective silence was held for all the victims past and present of nuclear warfare and nuclear testing. Pennants were used by SCRAP to celebrate every country that has signed up to the Treaty so far. They added two pennants – one saying Where is the UK and the other saying Sign Up now. 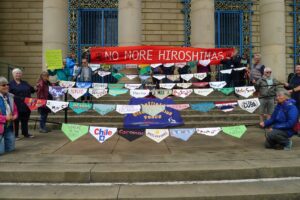 Just an hour later, Calder Valley CND for Peace & Justice hosted a commemoration event on Packhorse Bridge remembering those who died when the nuclear bombs were dropped and those who still suffer from radiation poisoning.  They had poetry, readings, song and reflection, all of which you see by watching the video below.

On Monday 9th August, Leeds CND, in conjunction with Leeds Peacelink and Mayors for Peace, came together to commemorate the lives lost and the people still suffering as a result of the Hiroshima and Nagasaki bombings. They had poetry, music from Hands Across, and speeches, including from the Lord Mayor and several councillors. You can watch the event on Facebook. 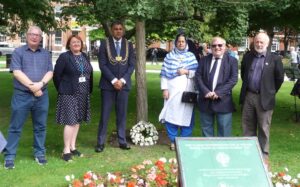 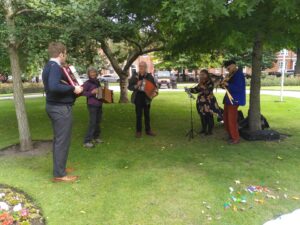 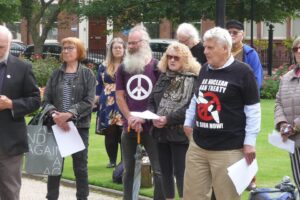 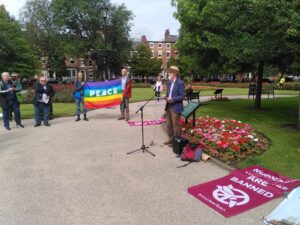 Grassington and District Peace Group also held a stall and commemoration in their local town. 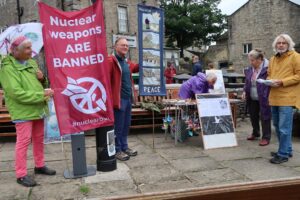 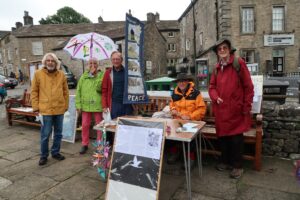 If you had an event in your city, town or village, let us know and we’ll share!