On 2nd November 1957 J. B Priestley, perhaps Bradford’s most famous son, published an article in the New Statesman entitled ‘Britain and the Nuclear Bombs’.

“Alone we defied Hitler; and alone we can defy this nuclear madness … There may be other chain-reactions besides those leading to destruction; and we might start one”.
J B Priestley

The article struck a chord nationally with an unprecedented number of supportive letters flooding in to the editor Kingsley Martin. In response Martin held a meeting at his London flat with the Priestleys and others prominent campaigners to plan a national anti-nuclear campaign. The Campaign for Nuclear Disarmament was launched at a public meeting on 17th February 1958 attracting over 5,000 people including many prominent intellectuals of the day and going on to become the largest single-issue campaign organisation in Europe.

The 60 years since have held many triumphs for CND, organising the largest protests in British history from the 400,000 in Hyde Park in 1983 to the million plus who marched against the Iraq war in 2003, we have much to be proud of. With that in mind we hope to see an array of events in February 2018 around the region, to celebrate not only these great historic achievements but to mobilise for the ongoing successful campaign for a Global Ban, bringing us closer to our goal of a nuclear free world. 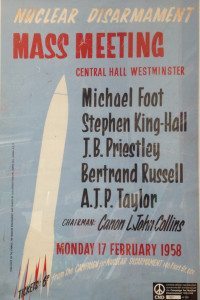 Yorkshire CND are organising a big celebratory event in Bradford on Saturday February 17th  11am – 3pm (60 years to the day of the first meeting). The event will feature music from the Commoners Choir and the Peace Artistes as well as story-telling and film. The Commonweal Collection (which shares the 60th anniversary this year) will be bringing some artefacts and talking about their links with CND. We’ll be reminiscing but also looking forward to the campaign in the next few years. A main feature of the day will be a Bring Your Own Museum, curated by The Peace Museum. Everyone is invited to bring an object that is special to their time or connection with CND and the peace movement. It will be placed in the temporary exhibition for the day.  A vegetarian lunch will be provided and a bar is available.  The event is free but booking is essential – see below.

We are also hoping that local groups will organise events of their own around this time, be this a special open meeting, a film-showing, a series of stalls, a vigil/protest, a display in your local library or whatever.

We can help with publicity – in fact we’d like to put details of all events in the region into one flyer to be distributed widely. But we’d need you to plan some basics by the end of December so we have time to get the information out as widely as possible. We can also help with display materials, films to show, speakers, stall materials (including our People’s Budget stall), funds to help put the event on, and so on. Do get in touch with us in the office to discuss things further.