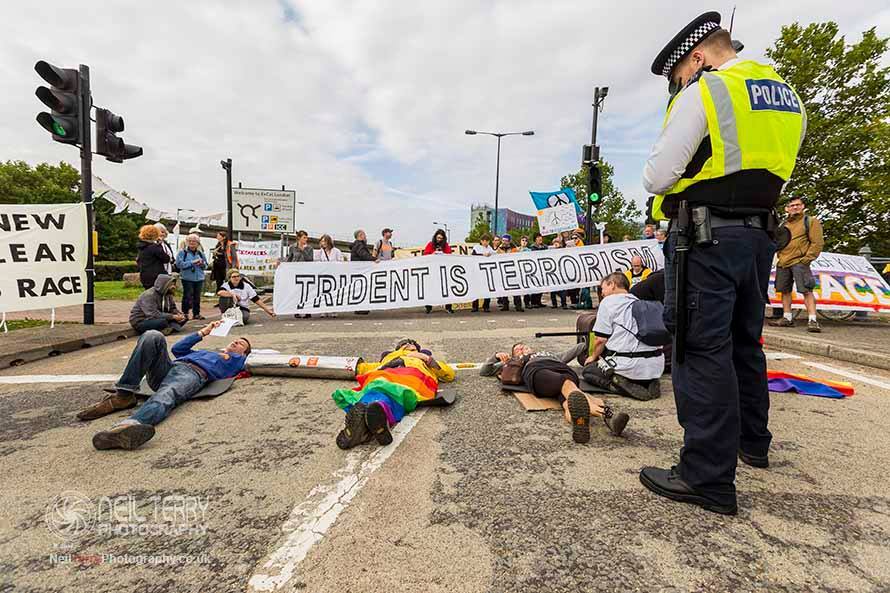 WRITE UP OF THE ACTION ON 4TH SEPTEMBER HERE.

Defence & Security Equipment International (DSEI) is one of the world’s largest arms fair, and provides an opportunity for 1,600 arms companies to market their weapons and services to over 30,000 participants from across the world.

DSEI is next due to take place in September 2019, and we’ll be gathering with other CND and anti-nuclear groups to stop them! The “No Nuclear Day” will take place on Wednesday 4th September in London.

The No Nuclear Day at the last DSEI happened on the 6th of September 2017, see full report of the event. If you would like to book transport with us, please use one of the following buttons:

Transport on Tuesday 3rd (to join the protest on Wednesday 4th)

If you can’t get time off work, we’ll be organising a day trip down to the demonstration on Saturday.

Defence & Security Equipment International (DSEI) is one of the world’s largest arms fair, held in London every two years. The fair is heavily sponsored by the UK Government to promote arms sales abroad and each year hosts representatives from countries with a record of grave human rights abuses.

In successive years the fair has been found to be selling weapons that are banned from sale in the UK (such as electro-shock, torture equipment and cluster bombs). In addition to this, the fair’s invite list contains some of the world’s most authoritarian regimes, many of whom are known to use such weapons against their own populations.

Yorkshire CND will be joining other CND and anti-nuclear groups at DSEI on Wednesday 4th September. We’ll be organising accommodation and transport – do you want to come? Email info@yorkshirecnd.org.uk to stay in the loop as we make plans. The protest will be part of the Stop the Arms Fair week of action to disrupt the setup of the event.

We’ll also be looking to organise planning meetings and nonviolent direct action training as we build up to the protest. Do you want to host a meeting or training? Email info@yorkshirecnd.org.uk and we’ll see what we can organise!

Why an Anti-Nuclear Day?

While the majority of the world’s governments are coming together to try to enact the UN Global Nuclear Weapon Ban Treaty, many nuclear states are spending billions upgrading their weapons of mass destruction. Arms companies are profiting from huge  sums being spent on new nuclear weapons – and many of these will be present at DSEI.

DSEI is a major networking event for businesses involved in the nuclear weapons industry. Nuclear weapons are highly complex systems, and many companies and suppliers are involved in their development, manufacture, and component supply. Arms fairs like this are crucial events for business to business networking and contracting, especially at this stage of the Trident renewal process. 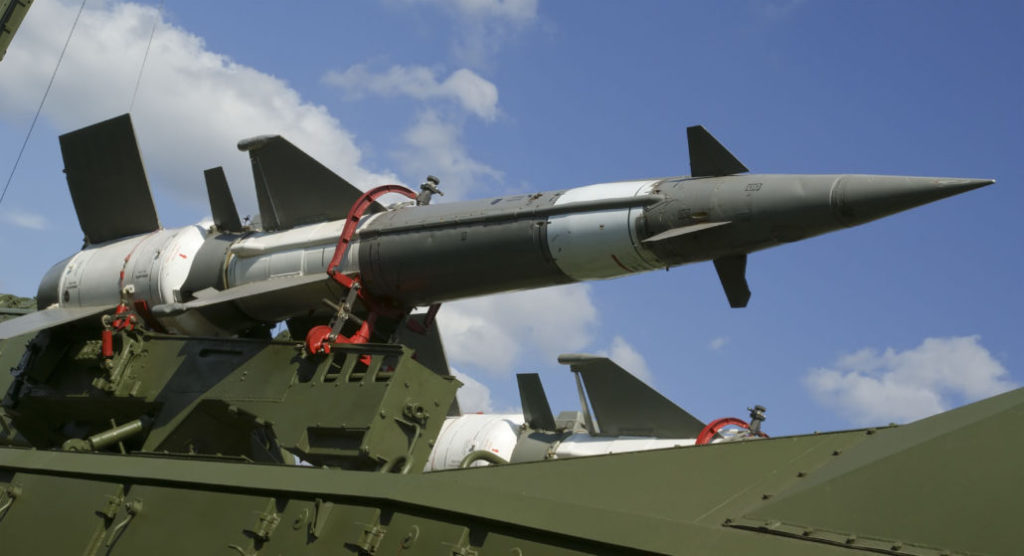 Regular exhibitors at the DSEI arms fair are the key figures behind multiple nuclear weapons systems.

Lockheed Martin – is the main partner in AWE-ML, the company that manages the UK’s Atomic Weapons Establishment (AWE). The AWE is responsible for the maintenance of the warheads for the UK’s Trident nuclear arsenal and manages and operates the AWE sites at Aldermaston, Burghfield, and Blacknest.

BAE Systems – the biggest UK arms company and subject of successive corruption and bribery investigations, it will provide the submarines that will replace the current ‘Vanguard’ subs, that carry the UK’s Trident nuclear missile system. It is also the prime contractor for the US Minuteman III Intercontinental Ballistic Missile (ICBM) system and part of the joint venture providing medium-range air-to-surface nuclear missiles for France.

Thales – is part of a joint venture to build the M51 submarine-launched nuclear missiles for the French navy.

General Dynamics – provides a range of engineering, development, and production activities to support to US and UK Trident II Strategic Weapons Systems. It is also involved in the guidance systems of the Trident II (D5) nuclear missiles of the US Navy.

MBDA-Systems – a joint venture between BAE Systems (37.5%), Airbus (37.5%) and Leonardo-Finmeccanica (25%), supplies the medium-range air-to-surface missile system that delivers much of the French nuclear arsenal.

Moog – developed the launch vehicles and strategic missile controls for the Minuteman III (US) and Trident (D5) (US & UK) missiles.

Northrop Grumman – has provided the original launcher system of the Trident II (D5) since the 1980s. In December 2013 it was awarded a US$ 112.9 million (€ 82.5 million) contract for ongoing support to the Trident II (D5) Underwater Launcher System and Advanced Launcher Development Program Support for the US and the UK. Together with partners Babcock & Wilcox, Aecom and CH2M Hill (also exhibiting at DSEI 2017), is a joint venture partner in National Security Technologies (NSTec). Since 2006, NSTec manages the Nevada National Security Site (NNSS), previously known as Nevada Test Site.

Safran Electronics & Defense – part of a joint venture to build M51 submarine-launched nuclear missiles for the French navy, which each deliver multiple warheads. Its subsidiaries Snecma and Sagem provide the propulsion and navigation systems for these missiles.

Raytheon – currently involved in a project to stretch the lifecycle of the guidance systems of the Trident II (D5) nuclear missiles of the US Navy. It is also involved in studies in support of the new W80-4 Long-Range Standoff missile for the US arsenal. 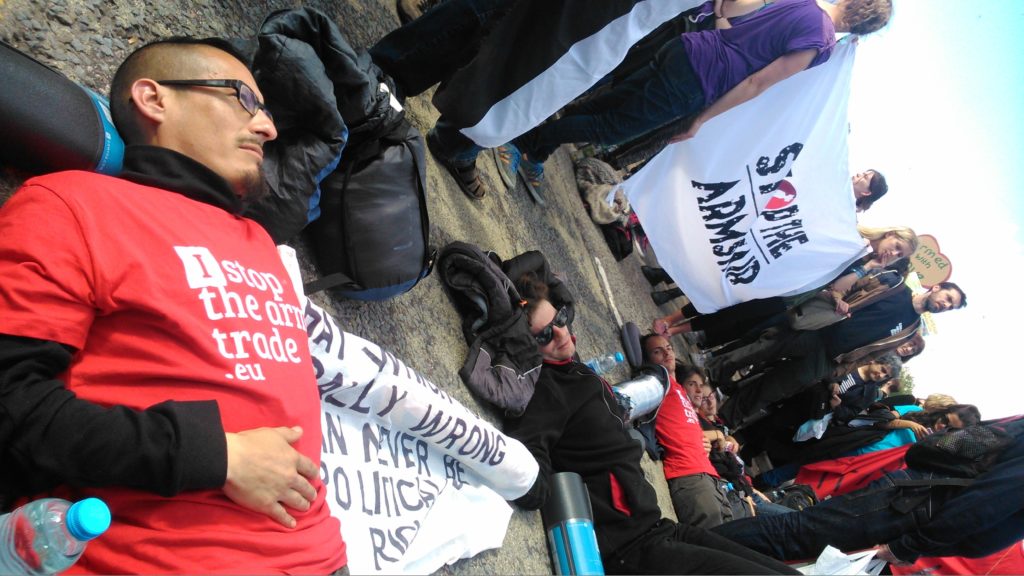 The setup of the fair was disrupted with daily themed events, beginning with ‘Stop Arming Israel‘ on the Monday and ending with the ‘Big Day of Action‘ on the Saturday. See full report of the week of action. 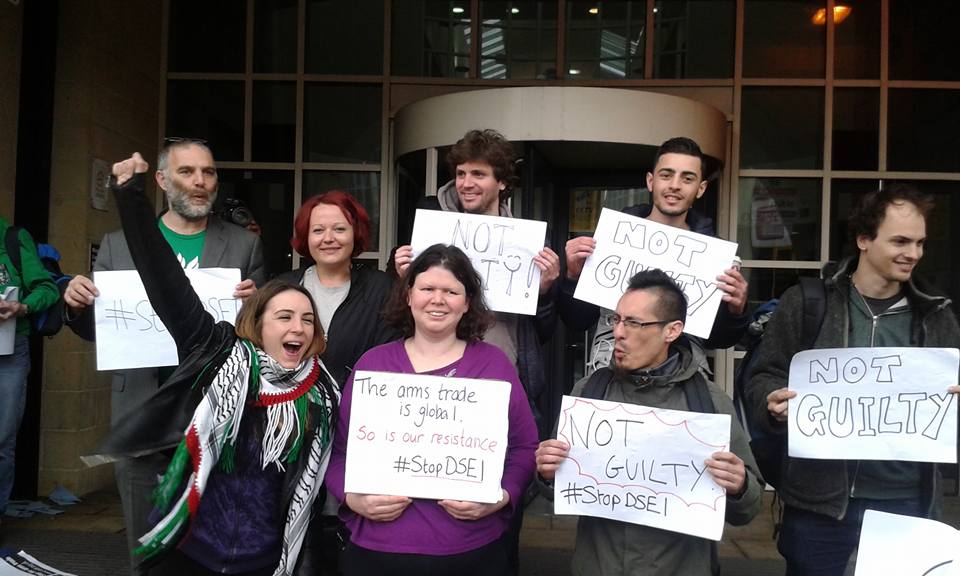 All 8 activists who were charged with offences relating the arms fair were found not guilty on the basis of preventing a greater crime. District Judge Hamilton stated that the defendants had established “clear, credible and largely unchallenged evidence that criminal wrongdoing had happened at previous DSEI fairs” and there was a “compelling inference that this was taking place at the 2015 exhibition”.