Early this morning a group of Trident Ploughshares activists from across the UK (including Yorkshire 😉 ) converged on Burghfield Atomic Weapons Establishment near Burghfield. They blocked approach roads, preventing workers from entering.

Hidden in the leafy lanes of Berkshire, Burghfield A.W.E. and it’s partner facility Aldermaston are where the UK’s nuclear warheads are planned and produced before being loaded onto lorries for trucking up public roads to the Trident submarine fleet in Scotland. The Mearings which is a private road with access to the Main gate of AWE Burghfield is blocked at both ends by a car with two people locked to it. The construction gate has a line of five people locked across it with their arms in “lock-on” tubes

Julia Mercer is a life-long peace campaigner, a grandmother of 7 who lives in Leintwardine, Herefordshire said:

“There is very little public awareness that the UK continues to spend obscene amounts of money (over £200 billion) on upgrading it’s weapons of mass destruction. These weapons are illegal, and deeply immoral in their indiscriminate slaughter of civilians. I’m ashamed that the UK continues in this folly. I hope our actions will raise awareness of what is going on here.”

This day,24th October is special in marking 73 years since the birth of the United Nations. The UK government has totally failed to have anything to do with the ground-breaking U.N. Treaty on the Prohibition of Nuclear Weapons. 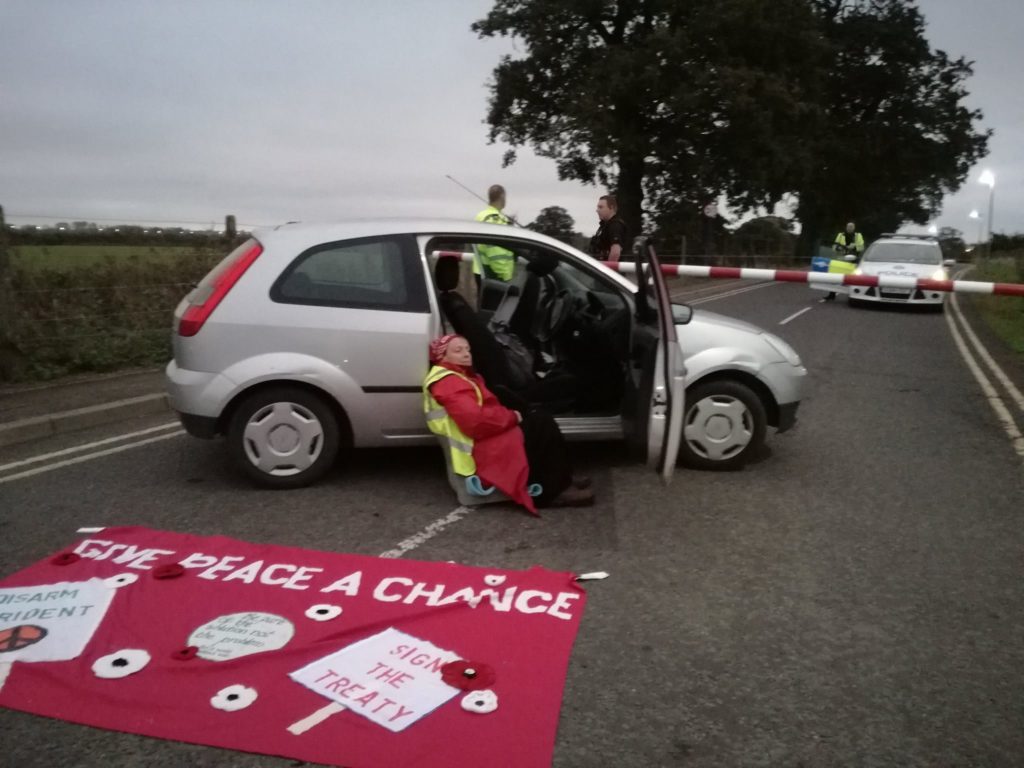 Blockade of the meerings entrace with protestors locked on to a modified vehicle.

“I hope our actions today might bring more attention to the damning safety report on this bomb factory, produced by the Office for Nuclear Regulation last August. The ONR warned then that the Burghfield facility “can only be allowed to continue for a limited period”

Jim Davies, a 70 year old retired Civil Servant said “with the current United Nations treaty on the total banning of nuclear weapons, gaining support, it is only a matter of time before the UK and other nuclear-armed nations will feel international pressure to join the rational global majority. I’ve never been involved in an action like this before and it’s heartening and empowering to feel that something can be done!”