75th Anniversary of the Dropping of an Atomic Bomb on Nagasaki

75th Anniversary of the Dropping of an Atomic Bomb on Nagasaki
Posted by Dave Webb on 3rd September 2020 in news, nuclear weapons

A small (30-40 people) slowly gathered in Park Square to commemorate the 75th anniversary of the bombing of Nagasaki. As usual the event was organised by Leeds CND and Yorkshire CND and supported by Leeds City Council Peacelink group and Mayors for Peace. This was the programme for the event: 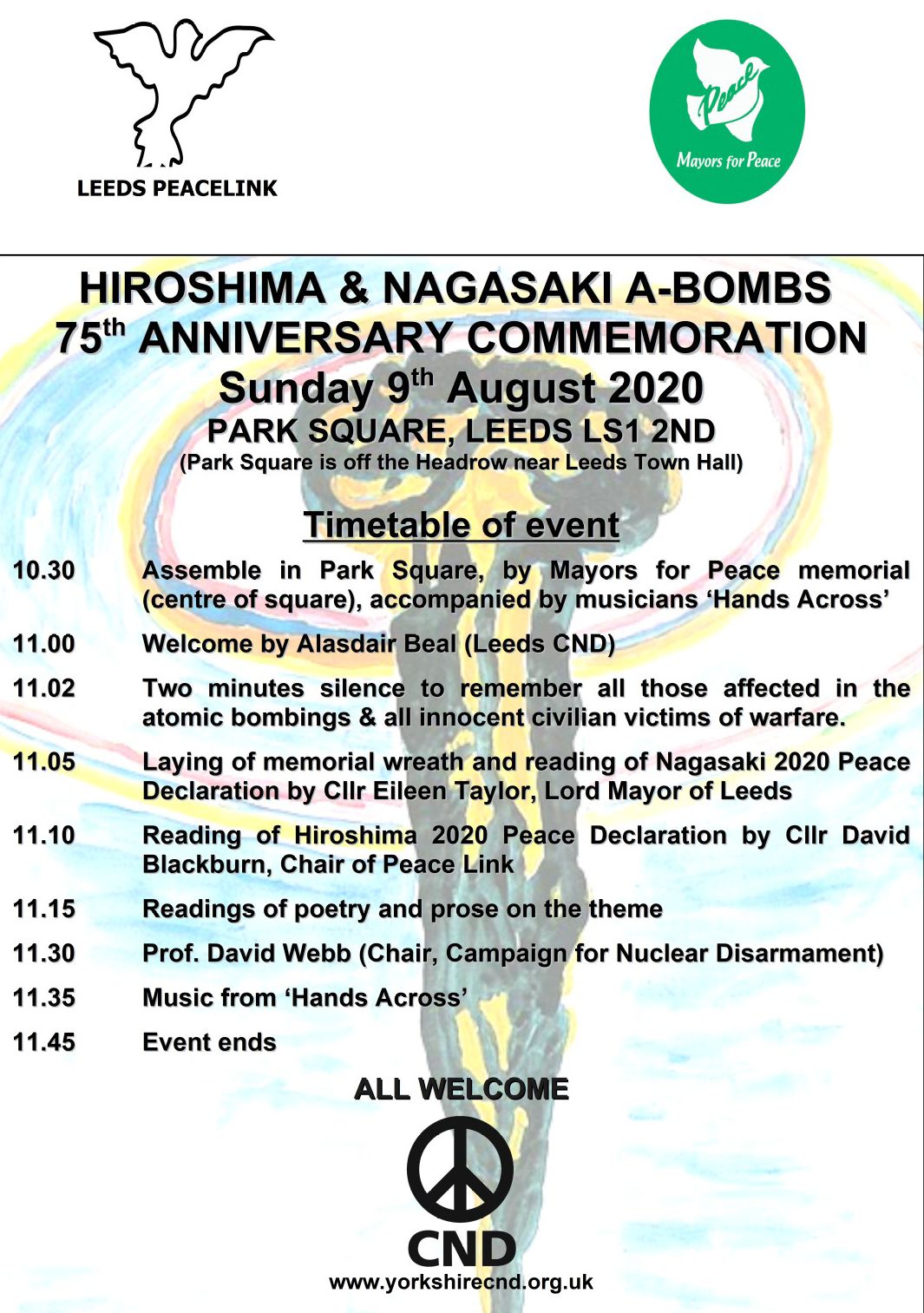 The event was held under social distancing conditions and it was good to see so many people, most of whom wore masks, turn up. Most wore masks and the whole event was shown live on facebook: 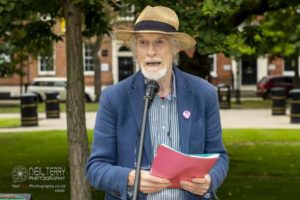 This year the Master of Ceremonies was Colin Archer (left) who was standing in for Alasdair Beal who unfortunately was not well enough to attend on the day.

After the two minutes silence to remember all those affected by the atmoic bombings, and all the victimes of warfare, Councillor Eileen Taylor, Lord Mayor of Leeds (and a Mayor for Peace) laid the wreath by the tree that was planted by Mayor Tadatoshi Akiba of Hiroshima and Mayor Iccho Itoh of Nagasaki during their visit to Leeds in 2003 (see main picture).

In addition, there were three Leeds City Councillors present (apart from Councillors Eileen Taylor and David Blackburn, Councillor Ann Forsyth was also presnt for the whole event) all three of them willingly signed the pledge of support for the TPNW under the ‘Nuclear Ban Communities’ campaign. 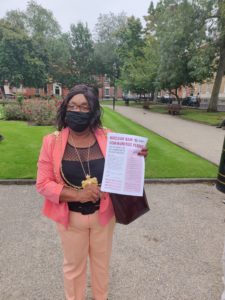 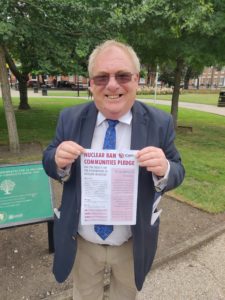 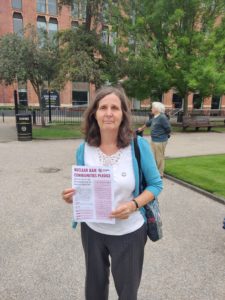 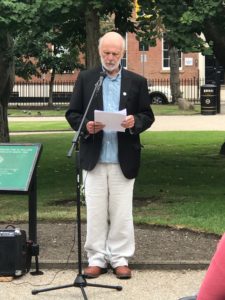 75 years ago today the people of Nagasaki were still in shock from the effects of the plutonium bomb dropped on their city  just 3 days after Hiroshima had been destroyed by a uranium bomb. By the end of that year over 200,000 people had died as a consequence of both bombs and tens of thousands have died since from the effects of trauma, burns, radiation and related illnesses. The nuclear age had begun and the world was changed.

Now, after 75 years of living with nuclear weapons, people may have become too used to having them around and many are not aware of the humanitarian effects. This is why these commemoration ceremonies are so important. We must never forget what nuclear weapons can do – the powerful messages and stories from the hibakusha, the few remaining survivors of the bombings, relate their terrifying  experiences which were so terrifying that they have been spurred on the dedicate their lives to ridding the world of the nuclear menace. Even though August 9th 1945 was the last time an atomic bomb was used in conflict, the health problems caused by the mining, handling and processing of uranium and the injustices, poverty and illness imposed on the victims of over 2000 nuclear tests are additional hidden costs of nuclear weapons. On top of all that, the huge sums of money, which could have been used for health, welfare, education have been diverted to military production and the nuclear industry, generating division and international tension. We have all witnessed how unprepared the world was for dealing with the Coronavirus pandemic. Despite numerous warnings that such an event was very likely to happen.

Now, arms control treaties are no longer being upheld, and governments have started updating and expanding nuclear arsenals. New technologies of command and control minimise human intervention and shorten the time available to consider possible responses, the probabilities of a catastrophic accident or mistake are increasing dramatically.

So, we have reached a point where last January, the Bulletin of the Atomic Scientists moved the hands of their ‘Doomsday Clock’, measuring the likelihood of man-made global catastrophe, to a hundred seconds to midnight – closer than it has ever been before due to the twin threats of nuclear war and climate change, Recent studies have shown that the military is a major contributor to carbon emissions and extensive military exercises and operations are driving us closer to extinction in more ways than one.

The demise of the Intermediate Nuclear Forces (INF) Treaty that removed all ground-based missiles – nuclear and conventional – with ranges between 500 and 5500km from European soil.

Is leading to concern that Europe will once again be hosting short-range, more usable nuclear weapons and once more considered as a possible nuclear battlefield. This time the threat comes from military confrontation on two fronts – in Europe and in the Pacific.

A new campaign across the countries of Europe is about to be launched calling for a European Nuclear Weapon Free Zone. The campaign also points out that people have been calling for Europe to be nuclear-weapon-free, and for the removal of the US nuclear weapons held in their countries, for many years. More recently they have also lobbied their governments to ratify the Treaty for the Prohibition of Nuclear Weapons (TPNW). The response has so far been poor but as the campaign points out “as the costs of nuclear participation and militarism rise and economies struggle with the effects of COVID-19, governments can no longer ignore these calls.”

Most world states want an end to this madness and critical mass is building behind the UN Treaty to Prohibit Nuclear Weapons which needs 50 states to sign and ratify before coming into force. 70 states have signed and 3 days ago on the anniversary of the bombing of Hiroshima, 3 more states ratified the Treaty – so, now only 7 more are needed to bring it into force and make the outlawing of nuclear weapons the new norm. half-way there.

ICAN, the International Campaign to Abolish Nuclear Weapons, a global citizens campaign that brought the Treaty into existence, is therefore calling on cities to take the lead and call on their governments to sign the Treaty. Many have – including Canberra, Sydney, Toronto, Paris, Berlin, Oslo, Hiroshima and Nagasaki, Geneva, Los Angeles, Washington D.C. and in the UK Edinburgh and Manchester.

It is more important than ever that we dissenting citizens of nuclear states are vocal and that we are visible.

Thankyou for coming today to show respect and remembrance for all those killed by the testing and use of nuclear weapons in the past. I hope you can join with CND and ICAN to ensure that these horrific and inhumane acts are never repeated.