The best way we can say goodbye to the tragic year that was 2020 is by making sure we make as much noise as possible about one of the biggest breakthroughs for peace in a generation. On January 23rd 2020, the ‘Doomsday Clock’ of the Bulletin of Atomic Scientists was set to 100 seconds to midnight (apocalypse) – the closest it has ever been. However, this year on January 22nd the 2017 UN Treaty for the Prohibition of Nuclear Weapons (TPNW aka ‘the Nuclear Ban Treaty’) will come into force.

The Treaty was adopted at the UN in New York on July 27th 2017 and opened for signature on 20th September of the same year. Since then, 51 states have ratified it and a further 86 have signed it. None of the nuclear weapon states have signed and the UK, US and France have refused to participate and even tried to influence others not to. However, as well as being a victory for grassroots campaigning and an illustration of what people power can produce, the TPNW is a breakthrough in international disarmament efforts and will undoubtedly generate momentum towards global nuclear abolition.

Alongside Joe Biden’s Presidential victory offering hope for the Iran Nuclear Deal, andthe New START treaty, the banning of nuclear weapons in international law provides campaigners with greater legitimacy in prosecuting arguments for peace against our own belligerently militaristic government. As the NHS reaches breaking point and the vaccine rollout faces obstacles, it’s critical we use the 22nd January to make the point that instead of wasting money and resources on nuclear weapons, our world would be far better off were we to invest in and prioritise healthcare, welfare and a green global future.

Whilst we enter into the toughest phase of the pandemic yet, it’s really important we don’t lose sight of the huge opportunities that exist for creating a nuclear-free world. It is vital that despite lockdown, we celebrate the Ban Treaty entering into force by hoisting flags and banners from our homes, writing to faith leaders and political representatives, and promoting the Nuclear Ban twitter storm. Unfortunately, because of the threat coronavirus poses to us all, we need to take the tough but responsible decision and hold back from any large gatherings. There will be some small banner-drops, but groups will elect ones and twos to carry these out in a socially-distanced, fully-masked manner. Once the lockdown is over and the spread of the virus has abated, peace campaigners across the region will be making a huge push to create awareness on this issue on the streets as well as online.

Groups and supporters around the region were also planning events for January 22nd but these have had to be restrained because of the current lockdown. Please use the following contact list to find out what is going on in your area: 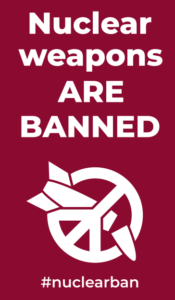 Flying the flag for the #NuclearBan

ICAN Germany have ordered these brilliant flags to celebrate the nuclear ban. Fly them from your home or office window, speak to your local church or raise it up the flag pole in your town square. We’ve ordered a few which will arrive in the next week and we’re happy to pass them on to our supporters at cost price (£8).

They are available from our web shop now.

Having recently taken part in a successful twitter storm for #UKDefundWar, we are keen to flex our social muscles again when the nuclear ban enters into force. The more organisations and individuals that participate, the more people will hear the good news and maybe even get us ‘trending’ on the 22nd. Spread the word!

Thanks for your support, and of course the work does not stop here. If you have any plans to celebrate Ban Treaty Day or ideas to carry on the good fight in the next few months, please get in touch with us at info@yorkshirecnd.org.uk