Across the Yorkshire region, campaigners, communities and local authority figures, including politicians and faith leaders, have taken action to remember the hundreds of thousands of lives lost in the Hiroshima and Nagasaki bombings. Organising vigils, reading poetry, making speeches, placards and banners, local campaigners have come together in their respective towns and cities to amplify the voices of the Hibakusha and ensure the devastating mistakes of the past are not repeated today.

Below is a round-up of events commemorating the 75th anniversary. All events stuck to government guidelines regarding social-distancing and outdoor gatherings. 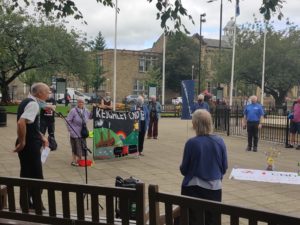 Organised by the Keighley Peace, Justice and Environment Network, a vigil was held involving over 20 local residents and activists. Joined by Keighley Town Mayor Peter Corkindale, Rev. Graham Potter on behalf of the Parish of Keighley and Doctor Richard Solomons – this action involved speeches from local authority figures, the retelling of first-hand quotes from Hibakusha documenting the horrific experience of Hiroshima and the subsequent decades of horror, and the placing and collection of peace cranes.

Mr.Corkindale received a copy of the Peace Declaration published earlier in the day by Hiroshima Mayor Kazumi Matsui. The Peace Declaration noted that “On 6 August 1945 a single bomb destroyed our city. Rumour at the time had it that ‘nothing will grow here for 75 years’. And yet, Hiroshima recovered, becoming a symbol of peace visited by millions from around the world.” Mr. Corkindale himself emphasized the need to learn lessons from the past and from the current pandemic as we move forward.

Doctor Solomons noted that, “It is only by extraordinary good luck that we have avoided an accidental nuclear war. Keighley would be safer without these weapons. Two hundred countries do not have nuclear weapons, nine possess them. We should make ourselves safer by joining those who refuse them.” Sylvia Boyes, one of the vigil’s organisers, drew attention to the 2017 United Nations Treaty on the Prohibition of Nuclear Weapons adopted by 122 nations yet not endorsed by the United Kingdom.

The action was covered in the Keighley News. If you’d like to get involved further, please contact robinandsylvia@aol.com 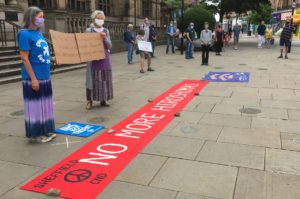 Sheffield Creative Action for Peace (SCRAP) held a well-attended vigil outside the Town Hall, involving many local residents, campaigns and organisations, such as Yorkshire CND and Extinction Rebellion. As well as bringing home-made placards sending a defiant message of peace and justice, SCRAP members read messages from the Mayors of both Hiroshima and Nagasaki. The Lord Mayor of Sheffield Tony Downing also spoke of the need for global peace and co-operation.

The event to mark the 75th anniversary of the atomic bombings of Hiroshima and Nagasaki in Bradford last Saturday was moved online over social distancing concerns. The ceremony, featuring contributions from the Bishop of Bradford Toby Howarth, Naz Shah MP and Lord Mayor Councillor Doreen Lee alongside a poem written especially for the occasion by Bradford Poet Sharena Lee Satti has been livestreamed and uploaded above. Five local campaigners also laid a wreath in Norfolk Gardens paying their respects to all the lives lost due to nuclear devastation.

Lord Mayor Councillor Doreen Lee outlined the sheer scale of destruction and terror which underpinned the “human tragedy” of Hiroshima and Nagasaki, urging the importance of remembering in order not to repeat. She stressed, “we must not squander the ability to learn from these lessons of the past”. Bishop Toby Howarth stated that, in the context of both the pandemic and the climate crisis, it is more important than ever, that we rid ourselves of nuclear weapons and redirect those resources into making the world a healthier, safer place. He echoed the words of Pope Francis and ended on the prayer for peace.

The commemoration’s move online was covered by the Bradford Telegraph & Argus. If you’d like to get involved further, please e-mail info@yorkshire.org.uk

Posted by Yorkshire Campaign for Nuclear Disarmament on Sunday, 9 August 2020

Organised by Leeds CND, and sponsored by Mayors for Peace and Leeds Peacelink, a vigil was held in Park Square. Joined by Councillor Eileen Taylor, the Lord Mayor of Leeds, and Councillor David Blackburn, chair of both Peacelink and Nuclear-Free Authorities, local campaigners paid their respects to the victims of Hiroshima and Nagasaki.

After laying down a wreath at the foot of Park Square’s Ginkgo tree, the Lord Mayor proceeded to read out the Mayor of Nagasaki’s own anniversary speech commemorating the lives lost 75 years ago and reaffirming the peace movement’s commitment to nuclear abolition. Councillor Blackburn read out the Mayor of Hiroshima’s annual speech.

There were also Hibakusha testimonies read out by local campaigners, pertaining to the damage and destruction caused by nuclear weapons. As well as music played by the Hands Across band, several elected councillors signed ICAN’s Councillor peace pledge demanding support for the 2017 UN Treaty for the Prohibition of Nuclear Weapons (TPNW). We also had words from National CND chair and Leeds resident, Dave Webb who, on the refusal of the nuclear weapon states to recognise the TPNW, restated “that we’re not going to let that stop us.” He urged Leeds City Council to follow the path treaded by Oxford, Manchester, Norwich and many others across the world in defying national government and pledging support for the 2017 treaty.

Calder Valley CND hosted a vigil in Hebden Bridge on Sunday commemorating the lives lost in Hiroshima and Nagasaki 75 years ago today. Joined by Hebden Royd Town Mayor Carol Stow, who read the Mayor of Nagasaki’s annual speech. Poetry, Hibakusha testimonies and speeches were read by local residents and campaigners. Banners and placards were also brought too.