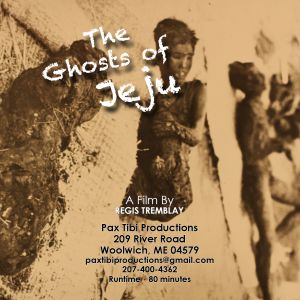 The Ghosts of Jeju: A film by Regis Tremblay (2013, 80mins) – A shocking documentary about the struggle of the people of Jeju Island, S. Korea. Set in the context of the American presence in Korea after World War II, the film reveals horrible atrocities at the hands of the U.S. Military Government of Korea.

Using previously secret and classified photos, film and documents, this is the first English-language documentary about the struggle of the brave people of Gangjeong Village who are opposing the military advance of the United States, just as their parents and relatives did in 1947. As then, they are being arrested, jailed, fined, and hospitalized for resisting the construction of a massive naval base that will accommodate America’s “pivot to Asia,” and will destroy their 400 year old village and their UNESCO protected environment.

Copies of this dvd can be purchased from Yorkshire CND.
Additional Information