Say No to the NATO war-manoeuvre Defender 2020 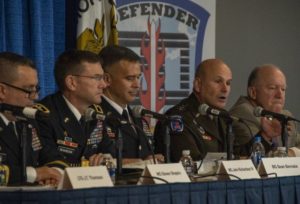 NATO is planning to hold its biggest war exercise in 25 years next year. Called Defender 2020 it will involve 37,000 soldiers and officers with NATO troops from 17 countries and include 20,000 US soldiers who will be transferred to Europe by ship and plane, possibly arriving in Hamburg, Bremerhaven, Rostock and Antwerp. They will then be transported by road and rail (under a priority agreement) to the east towards the Polish border and then to the Russian western border.

In July 2018 the German Bundeswehr noted that Germany will be an important political and logistics hub for the military manoeuvre and a “potential backseat area” – but for what? For practising for a war against Russia? The timing of the manoeuvre in April / May 2020, is itself a provocation. The 8th of May will be the 75th anniversary of the liberation of Germany and Europe from fascism, when US and Russian troops met in Berlin. It was a victory which was decisively achieved through the sacrifice of so many men, women and children of the Soviet Union. Every year the people of Russia remember the occasion as ‘Victory Day’ on 9th May (it happened on the 9th in Moscow time).

An activists’ conference against Defender 2020 in Leipzig on November 24th condemned the exercise as an aggressive action against Russia. Around 100 people participated in the meeting, mostly from East Germany, and the hall in the church of St. Trinitatis was overcrowded – some of those present had to sit in the hallway and on the floor. Those present were peace activists from almost all regions, towns and villages of Eastern Germany.

In Germany, the exercise will include involvement at the following:

The plan seems to be for a “fight, combat support and leadership manoeuvre”, which will takes place simultaneously in Germany, Poland and Lithuania and in which the rapid response troops of NATO will participate (according to information from the Ministry of Defense and the Obleute of the German Bundestag),

The coordination for this mobilization against Russia will be held in Ulm (which will house joint support and command centres), in Stuttgart (EUCO) and at the US Air Base Ramstein.

The scale of the exercise will require comprehensive logistics and planning, the involvement of local and regional authorities and state governments as well as the German railways. It will have a dramatic impact on the entire civil infrastructure, including public transport.

The military manoeuvre is an environmental disaster, an insane waste of resources and a destruction and disruption of nature. It will be a major active contribution to the impending climate catastrophe by the military.

There are many reasons to oppose it: from a political, military, geostrategic, ethical, moral, historical, standpoint and because of its damaging effects on the climate, the environment, on traffic and the civilian infrastructure. Its comprehensive rejection should lead into a coalition involving diverse actors and diverse actions, as well as international cooperation.

The activists’ conference in Leipzig was the beginning.

After an intensive discussion it was agreed:

Much is still in the planning stages and the creativity and commitment are virtually boundless. It is already clear that the manoeuvre is encountering broad and varied active resistance, mobilizing and bringing the peace movement (and hopefully many other forces) together. The planning has begun: An Action Conference North will be on 18th January 2020, another 2nd Action Conference hopefully all will take place on 26th January 2020 in Leipzig.