To mark Leeds City Council passing a resolution last year in support of the UK Government signing the UN Treaty on the Prohibition of Nuclear Weapons, a tree was planted in Park Square.

In recent months, Leeds CND fundraised to install a plaque explaining the significance of the tree and the decision by Leeds City Council to endorse the TPNW.

On the 22nd January 2022, the first anniversary of the TPNW, the plaque was erected in front of the tree. In early February, Leeds City Councillor David Blackburn, Chair of UK/Ireland Nuclear Free Local Authorities [NFLA], joined members of Leeds CND to commemorate the plaque’s installation.

The NFLA is like CND a member organisation of ICAN, the International Campaign to Abolish Nuclear Weapons, winner of the 2017 Nobel Peace Prize. 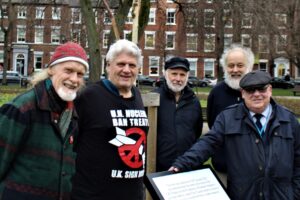 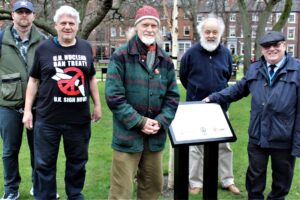 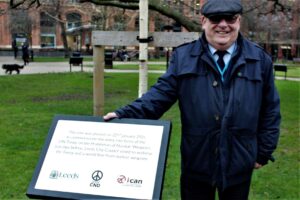