A recent piece by Naom Chomsky reports that the famous ‘Doomsday Clock’ currently stands at three minutes to midnight….. a chilling but essential read.
(http://www.informationclearinghouse.info/article44859.htm) In this context it is interesting that recently released figures for Trident Renewal, which have soared in recent weeks to £205 billion have yet to be justified by Government.

Report Back
‘Sheffield’s Nuclear Winter’ This one-day exhibition at Central Library consisted mainly of news clips from the era of ‘Threads’ and S Yorkshire’s self-declared ‘Nuclear- Free Zone’ and was organized and presented by two students from a master’s course.

Burghfield: This nuclear arms factory was singled out for action by the ‘Trident Ploughshares’ group and started June 9th. Groups representing various regions in the UK (Sheffield and Yorks CND included) and abroad – even a minibus of activists from Finland! Actions included a successful blockade of all entrances the following Monday; one gate still closed several days later, preventing access by construction vehicles and staff. Other actions included placing paper doves and cranes on a fence bordering the electrified security barrier and while these were removed by police as a ‘breach of local byelaws’ they magically reappeared the following day.

Peace in the Park: held at the Ponderosa park in Sheffield, the CND presence was organised and arranged by Yorkshire CND who brought and erected their own large gazebo at the appointed pitch where we rubbed shoulders with Global Justice, Woodcraft Folk, the RSPB and South Yorkshire anti-fracking campaign. Yorks CND’s badge-making kit and interactive game that allowed interested passers-by to divert funds from the £200bn for Trident to an area of their own choosing proved popular; a satisfying number of flyers taken.

Continuing
‘Journey for Justice’ The Art House, 8 Backfields, S1 4HJ May 30th – June 25th.
This ground-breaking exhibition covers aspects of the struggle for human
Dignity in various locations across the globe but chiefly the USA.

MP’s meeting to debate Trident: this may well be superceded by an attempt to approach local MPs (see July 13th) in view of Louise Hague’s unwillingness to take part in advance of the Commons debate on Trident.

Menwith Hill, July 2nd – please note change of date, 3-8pm: Organised by CAAB (Campaign for the Accountability of American bases) this event includes a reading of the Declaration of Independence from America, speakers including Veterans for Peace and various acts. Anyone interested in seeking a lift/taking a car please contact Yorkshire CND (yorkshirecnd.org.uk)

Farnborough Airshow, July 11th (Farnborough, A325) CAAT will be making their presence felt at this feast of militarism whose guests include some of the most repressive Governments on the planet. https://www.caat.org.uk

July 13th: Join a Nationwide CND lobby of MPs at Westminster). Alternatively, attend your local MP’s surgery to let them know how you feel; if you live in Hallamshire, Heeley, ‘Hillsborough and Sheffield Brightside’ or Central constituency you might want to contact Bernard, Jon, Kath or John (respectively) who will be glad to share the occasion.

Aug 7th – Peace Picnic – Meersbrook Park. Sheffield’s Mayor has been invited as a member of ‘Mayors for Peace’, an international organization that campaigns for the elimination of all nuclear weapons by the year 2020. This annual commemoration of Hiroshima and Nagasaki is held at the walled garden in Meersbrook Park and jointly sponsored by Sheffield CND, SCRAP and the Meersbrook Garden Trust (organized this year by SCRAP); an occasion for joint and communal reflection with various artistic performances and a decoration ceremony.

Also:
Migration Matters Festival, June 17-25th. Based at ‘Theatre Delicatessen’ (old Woolworth’s building), The Moor, Sheffield the programme includes items and presentations to do with refugees and is supported by SYMAAG, The Arts Council and the University of Sheffield; see’migrationmattersfestival.co.uk’

Dates for your Diary
July 16th – Sharrow Festival (No CND presence due to lack of volunteers).
Oct 18th – Off the Shelf – The Hammer Blow 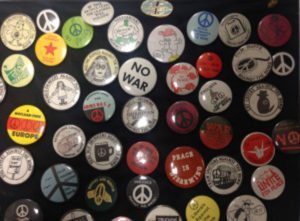