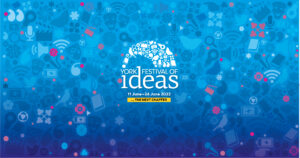 Taking place from 11 to 24 June this year, the Festival offers over 150 mostly free in-person and online events.
This year’s Festival programme includes a Focus Day on ‘War and Peace: Threats to global security’. The events are hybrid, and people can either attend one event in the series or come along for the whole day. Either way, attendance is free.
Ukraine: Causes, consequences and implications for global security, Sunday 19 June, 11am to12.30pm (in person and online)Our panel of experts – award-winning broadcaster, journalist and writer Gavin Esler, who has wonseveral awards, including two for The Big Steal, his podcast series about Vladimir Putin; historian andwriter Olesya Khromeychuk who specialises in the history of East-Central Europe; and AmbassadorStefano Pontecorvo – discuss the causes, consequences and implications of the invasion and war inUkraine.
Europe’s Role in Defence and Security on a World Stage, Sunday 19 June, 1.15pm to 2.45pm (inperson and online)Join our global experts as they explore the European Union’s role in global defence and security, anddiscuss how the shifting geopolitical landscape poses threats that call for a unified and robustresponse. With Deputy Director General at Royal United Services Institute, Malcolm Chalmers;political scientist and Emeritus Professor at the European University Institute, Brigid Laffan; andhistorian of Russia, Shane O’Rourke.
Europe and the Radical Right: Where next for democracy and authoritarianism? Sunday 19 June,3.30pm to 4.45pm (in person and online)In this panel discussion, we examine the multiple social, economic, cultural and political causes forthe rise in popularity of the radical right across Europe. Speakers include historian, Booker Prizefinalist and former politician, Michael Ignatieff; editor-in-chief of the Liberal Culture Weekly anddirector of the Liberal Culture Foundation, Jaroslaw Kuisz; and cyber security expert and Director ofthe Digital Society Institute, Heli Tiirmaa-Klaar.
These Festival Focus events are presented in collaboration with The Morrell Centre for Legal andPolitical Philosophy, which is generously supported by the C and JB Morrell Trust.
The full Festival programme can be explored at yorkfestivalofideas.com._____________________________________Stay up to date with all things related to the Festival by following York Festival of Ideas on socialmedia: Twitter, Facebook, Instagram, YouTube, #YorkIdeas