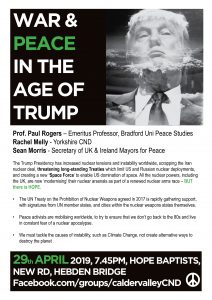 The Trump Presidency has increased nuclear tensions and instability worldwide, scrapping the Iran nuclear deal, threatening long-standing Treaties which limit US and Russian nuclear deployments, and creating a new ‘Space Force’ to enable US domination of space. All the nuclear powers, including the UK, are now ‘modernising’ their nuclear arsenals as part of a renewed nuclear arms race – BUT there is HOPE.

• The UN Treaty on the Prohibition of Nuclear Weapons agreed in 2017 is rapidly gathering support, with signatures from UN member states, and cities within the nuclear weapons states themselves.

• Peace activists are mobilising worldwide, to try to ensure that we don’t go back to the 80s and live in constant fear of a nuclear apocalypse.

• We must tackle the causes of instability, such as Climate Change, not create alternative ways to destroy the planet