Time to Think Beyond the Current Nuclear Weapon Free Zones: Challenges for the Indo-Pacific

Yorkshire Campaign for Nuclear Disarmament > Events > Time to Think Beyond the Current Nuclear Weapon Free Zones: Challenges for the Indo-Pacific

Time to Think Beyond the Current Nuclear Weapon Free Zones: Challenges for the Indo-Pacific 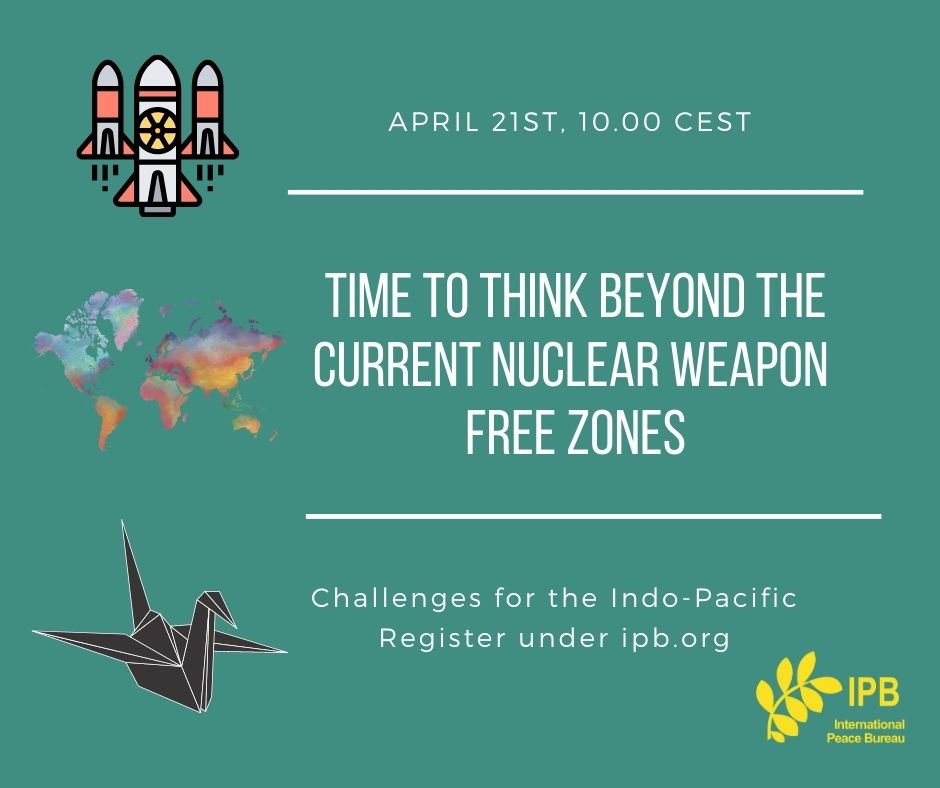 The International Peace Bureau’s Asia working group would like to introduce its next upcoming webinar in light of the campaign for Nuclear Free Zones.

Registration for this event is now open and can be accessed here.

Speakers are listed below.

Establishing of Nuclear Weapon Free Zones (NWFZs) is a practical contribution of NNWSs to nuclear non-proliferation and confidence-building, to which the five nuclear-weapon states provide security assurances. Today there are five NWFZs consisting of 119 states and 18 territories, and making up about 2 bil. people. We are also witnessing efforts to establish the so-called second generation of NWFZs, i.e. in regions with conflicts or where great powers have geopolitical stakes, such as in the Middle East, Northeast Asia and the Arctic. In all these regional zones safety in numbers plays an important role.

However in the Indo-Pacific region there are states or territories that due to their geographical location or for some compelling political/legal issues cannot form part of regional zones. That creates not only a legal loop hole in international law but in practice nuclear blind spots and grey areas (at best) in the yet to be established nuclear-weapon-free world. As we all know, a nuclear-weapon-free world would only be as strong as its weakest link. Hence more attention needs to be paid to the risk of blind spots and grey areas.

Nuclear-weapon states agree in principle to establishing regional NWFZs, however when it comes to single-state NWFZs (SS-NWFZs), they have so far been reluctant to accept such zones explaining that doing so would establish precedents unfavourable to them as well as “discourage” establishing regional zones. Such an approach raises a logical question: what is more important, a precedent establishing SS-NWFZs that would, like regional zones, contribute to international confidence, security and stability or knowingly creating nuclear blind spots or grey areas for continuing the nuclear arms race and thus contributing further to distrust. On the other hand, successfully addressing this issue will contribute not only to regional but to common security in XXI century.

So far Mongolia alone has been promoting the issue of SS-NWFZ. Bearing in mind the loop holes in law and actual practice, it is time to address this issue that affect more than a dozen states and territories.

The webinar to be held on 21 April, will be organized by Asia Group of International Peace Bureau and provide an opportunity to get to know the challenges that small individual states and non-self-governing territories face in becoming part of the nuclear-weapon-free world. In that common cause the understanding and support of international NGOs, including of IPB, would be needed.

We look forward to having you with us.