No Nuclear Day of Action at Stop DSEI

No Nuclear Day of Action at Stop DSEI 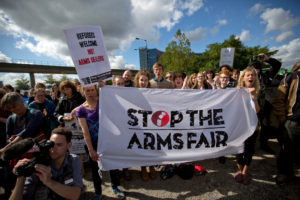 In September, there will be daily actions to prevent the delivery of military equipment to Defence and Security Equipment International (DSEI), the world’s largest arms fair.

Anti-nuclear campaigners, including Trident Ploughshares and local CND groups, will be heading down on the 6th September to highlight the links between the arms trade and nuclear war.

From BAE Systems to Lockheed Martin, many of the biggest companies at DSEI are central to the Trident replacement and the nuclear arms race – spending billions to kill millions.

If you would like to make their work more difficult, join us on the 6th September.