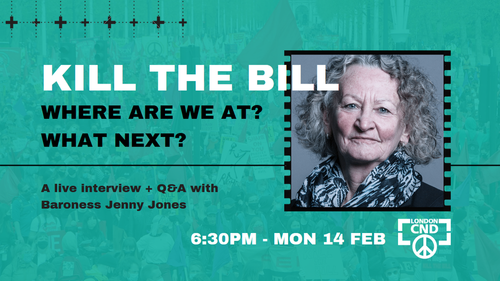 Baroness Jenny Jones joins London CND in a live interview on Kill the Bill. Where are we at? What next?

The government is planning to make important changes to the law that will restrict the right to protest when lockdown restrictions ease.

The police, crime, sentencing and courts bill would give the Home Secretary, Priti Patel, powers to create laws to define ‘serious disruption’ to communities and organisations, on which police can then rely to impose conditions on protests.

But in a victory for protestors, the House of Lords – in which Baroness Jenny Jones sits – voted down some of the worst elements of the bill.

Jenny will give us background on the Kill the Bill campaigns, her experience in the House of Lords and her views on future developments as the bill returns to the House of Commons.