Global Day of Action – Stop the War in Ukraine

Global Day of Action – Stop the War in Ukraine 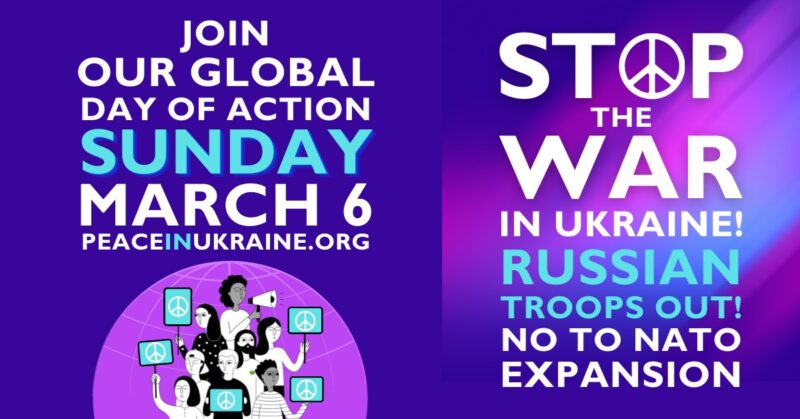 We need a massive unified response by peace-loving people around the world to say no to war in Ukraine; yes to negotiations and peace.

An international anti-war online meeting on February 26 attended by thousands and organized by CODEPINK, Stop the War Coalition, the Campaign for Nuclear Disarmament and the No to NATO network agreed to an international day of anti-war action on Sunday 6 March. We call on everyone who opposes this war to take to the streets on March 6 in a massive display of global opposition to the war and the warmongers.

The war in Ukraine is a disaster for the people of Ukraine and a terrible threat to us all. We oppose the Russian invasion and call for the immediate withdrawal of all Russian troops. We recognize that the expansion of NATO and the aggressive approach of Western states have helped cause the crisis and we demand an end to NATO expansion.

There have already been many anti-war demonstrations in Russia and many other countries. What we need now is a massive, unified response by peace-loving people around the world to say: “No to War in Ukraine; Yes to Negotiations and Peace”.

If you’re organising an action where you’re based, or wanting to join an already-existing one and want more details, please get in touch with us on info@yorkshirecnd.org.uk and keep an eye on the website.