Don’t Bank on the Bomb Day of Action: NatWest and Barclays

Don’t Bank on the Bomb Day of Action: NatWest and Barclays 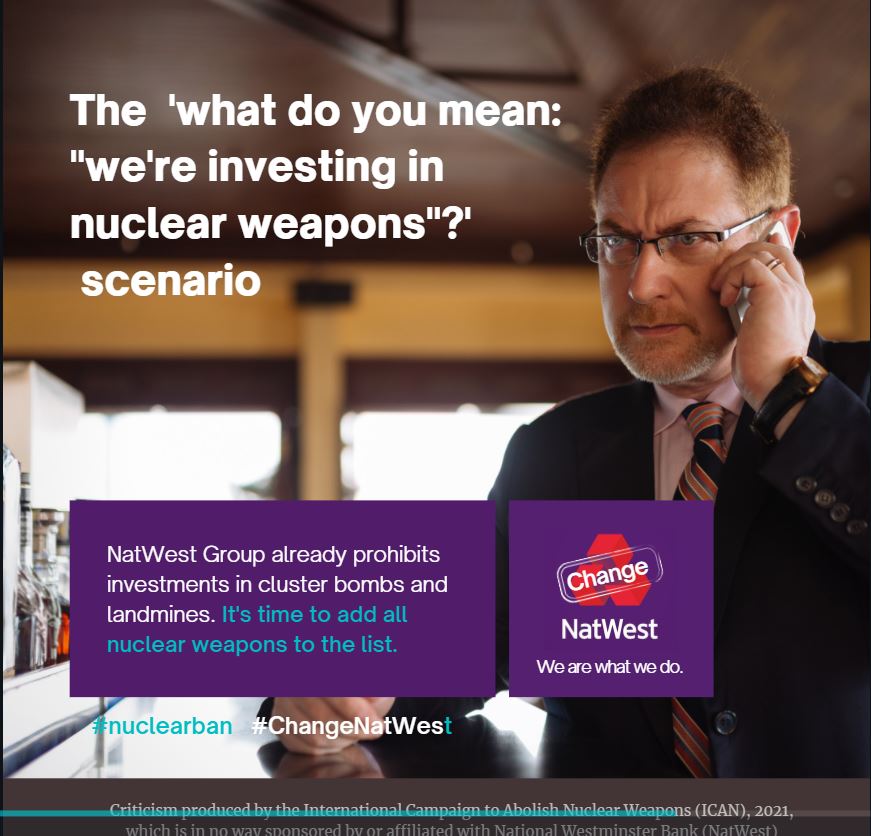 Yorkshire CND is calling a regional day of divestment action, inviting all peace campaigners across the region to hold socially-distanced stalls and leafleting sessions outside NatWest and Barclays banks in their towns and cities.

According to Don’t Bank on the Bomb, between 2018-2020, NatWest had over 1.8 billion in outstanding loans to 11 nuclear weapons producers. Similarly, as noted in the Nuclear Weapons Financing Research Group’s ‘Investing in Change‘ report, Barclays is the “second-most significantly-exposed company to nuclear weapons producing companies”.

It is absolutely vital that we begin to communicate these facts to both their consumers and the broader public. In a situation where the Johnson government is lifting the cap on nuclear warheads by 40%, in complete disregard of the reality that 77% of the British public support a total global ban of nuclear weapons and 59% support Britain signing up to the UN Treaty on the Prohibition of Nuclear Weapons, it is imperative that we get the word out and put pressure on these banks!

If you are interested in doing an action on the day in your town or city, get in touch with the YCND office and we’ll give you a hand. You can contact us on info@yorkshirecnd.org.uk

Fliers for the action:

Leeds: 11am at Barclays on Albion Rd, Leeds City Centre.