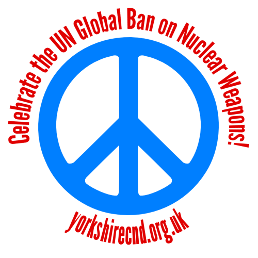 After years of tireless campaign, the UN Treaty on the Prohibition of Nuclear Weapons will finally open for signatures by national governments on 20th of September.

STREET PARTY! Join us to celebrate with music, cake and fizzy pop.

We’ll be joined by Fabian Hamilton MP, the shadow minister for Peace and Disarmament who attended the Ban Treaty talks in New York. We don’t have to live in fear, there is now hope for a permanent ban on all Weapons of Mass Destruction.

After the party poppers, we’ll be letting commuters know the good news and encouraging people to ask their MP to support the ban.

Here’s a link to the Pledge so you can contact your MP directly:
http://www.icanw.org/projects/pledge/