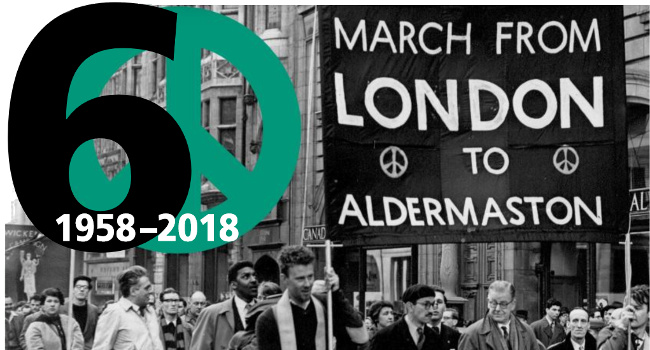 We’re travelling down to AWE Aldermaston, Britain’s nuclear weapons factory to celebrate the 60th Anniversary of CND’s first mass demonstration. Join us for music, speeches and fence decoration – the suggested theme is Peace Doves with your own message to the UK Government (try to keep it civil ;-).

This will be CND’s big national event to mark the 60th anniversary of the organisation and as we saw with our own Celebration in Bradford is a brilliant opportunity to get our message across in the press about the choice we face between a renewed arms race or the Global Ban Treaty. We’ve got fliers in the office so let us know if you help with promotion or just help us get word out on social media.

Transport is being organised from Leeds, Bradford and Sheffield (from £5 return) but let us know if you’re travelling down from other areas and we’ll try and fill the spaces in your vehicle.

Bradford – Leaving from Bradford Hotel, Hall Ings at 7am – returning around 8pm

Leeds – Leaving from Leeds Station at 7.30am – returning around 7.30pm

Sheffield – Leaving from Meadowhall Interchange at 8.10am – returning around 7pm