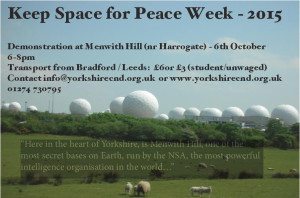 Menwith Hill is one of the United States’ most important overseas bases, playing an integral role in the broader strategy of US global power projection. Nominally an RAF base, it is operated and controlled by the US National Security Agency, and is one of the biggest electronic eavesdropping stations in the world.
It has also been developed as a relay station for space based satellites for US Missile Defence, which is in essence a shield behind which US forces can attack. The development of Missile Defence is a source of tension with Russia which feels targeted, and a new ‘Cold War’ arms race threatens us all.  Menwith Hill is also capable of overseeing ‘real-time’ military operations such as drone attacks.

What is nominally an RAF base is really an American ‘death star’, carrying out illegal forms of electronic spying and warfare over which there is no democratic accountability and very little debate. The only solution is to challenge the legitimacy of a foreign power occupying a large area of Yorkshire countryside.

Keep Space for Peace Week is an international week of protest called by the Global Network Against Weapons and Power in Space.

Yorkshire CND will join the Campaign for the Accountability of American Bases (CAAB) at their weekly protest on 6th October, during Keep Space for Peace Week.  www.caab.org.uk