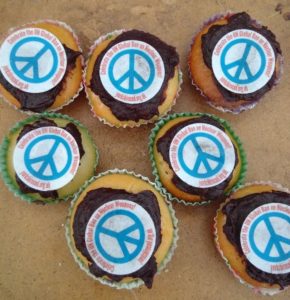 There was a great turnout in Leeds City Square yesterday for our celebration of the opening  for signatures of the UN Treaty on the Prohibition of Nuclear Weapons. A dozen or so came along to help and brought cup-cakes and fizzy pop (that looked a bit like champagne) as well as banners, flags and inflatable doves!

We leafleted commuters leaving or returning from work and invited them to share the celebration by taking one of the delicious cakes (complete with edible CND symbol) and joining our toast to the new treaty that we all hope will eventually make nuclear weapons illegal across the world. 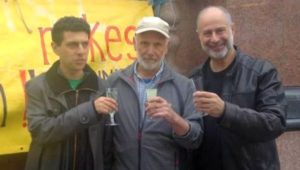 We were also joined by two Labour MPs from Leeds – Fabian Hamilton (Leeds NE, the Shadow Minister for Peace and Disarmament) and Alex Sobel (Leeds NW) who both spoke of their support for the treaty and their wish for the UK and all states to sign up to it.

Within hours of it being opened up for signatures, the news from the UN was that 50 states had already signed up! The treaty only requires 50 states to sign it and then ratify or accede to it before it enters into force so, as others are bound to join in the next few weeks/months (over 120 voted in the UN to agree to the wording of the treaty in July) it shouldn’t be too long before it becomes effective.

However, as the treaty only comes into force in states that sign, we need to work hard to ensure that the UK joins in as soon as possible. At a time when many people are concerned about the possibility of a war between nuclear armed nations with leaders subject to unpredictable behaviour, the need for a nuclear weapons free world has never been more obvious. The UK, US, France and most NATO member states actually boycotted the discussions in the UN that resulted in the formulation of the treaty. North Korea was not present at the latter stages either but they were the only nuclear weapons state that voted for discussions on the treaty to begin in the first place. So, there is a great opportunity to work towards real multilateral disarmament – something our government has said it is committed to – now it is our job to hold them to it.

Join us and help put the pressure on – help make the world a safer and saner place!

Considering nuclear weapons as inhumane and  illegal is now the official norm!